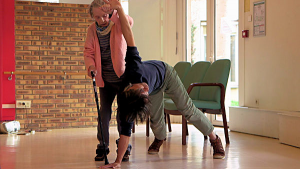 A Young Girl in Her Nineties

Motivation, FIPRESCI Prize in Leipzig 2016:”The FIPRESCI jury has decided to award the International Critics Prize this year to a film that has moved us tremendously and left us deeply affected. It is a film that unfolds unexpectedly, almost as if it has been scripted, as a touching love story between an Alzheimer patient and a choreographer who evokes in her vivid memories of life. The camera is tenderly creating intimacy with the protagonists without being intrusive in any way and captures body movements with small nuances of human touch. Beautiful love songs, carefully selected by the choreographer, serve as the perfect soundtrack for a film that generates a great feeling of exhilaration. We are delighted to award the FIPRESCI prize to Valeria Bruni Tedeschi and Yann Coridian’s film ‘A Young Girl in Her Nineties'”.