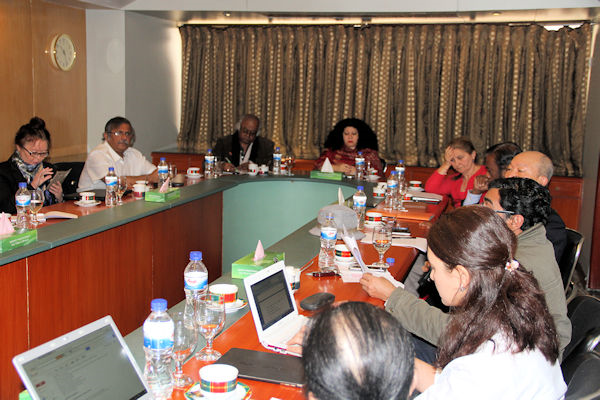 Dhaka, the capital of Bangladesh has become the premier film festival venue in that country. Dhaka Internation Film Festival (DIFF) originated in 1992 when the Rainbow Film Society organized the Festival for the first time. It was initially held once in every two years but became an annual event in 2017, successfully presenting the best of regional and international cinema.

The presence of official governmental bodies reflects the huge support that the festival receives and its importance to the cultural life of Bangladesh. The man behind its success and increasing reputation is the director of the festival, Ahmed Muztaba Zamal, a film critic whose excellent knowledge of film and wide contacts all over the world has brought to Dhaka many interesting and famous film people. DIFF has offered a wide choice of various programmes and this year provided attendees with the opportunity to discuss contemporary cross-cultural trends. The festival kicked off with the 4th Dhaka International Conference on Women in Cinema, organized by the Rainbow Film Society and the Department of Women and Gender Studies at the University of Dhaka. The selection of female films was accompanied by panels focussed on various themes: How to Sustain Gender Quality in Cinema, The Pioneering Women-filmmakers in Early Central Asian Cinema, Women in the Avant-garde and discussions around the gender imbalance in the Indian film industry and feminist discourse of motherhood in Indian cinema. The retrospective also focussed on women filmmakers. One highlight was the opportunity to watch the films of French documentarist Julie Bertucelli (who had worked as an assistant to Otar Josseliani, Rithy Panh, René Féret and Krzystof Kieslowski) and who since 1998 has made her own films. Another strand was dedicated to the French director Céline Sciamma  and her films “The Birth of the Octupus” (2017), “Girls Band” (2014) and “Tomboy” (2011). The decision to introduce this César Award nominee “who is interested in the fluidity of gender and sexual identity” to local audiences indicates the effort to open a wide and free dialogue in all aspects of feminist cinematic discourse.

The  next important segment of the festival programme was the meeting of the Asian film critics at the FIPRESCI conference addressing the situation in national film criticism. The meeting of film critics and Bangladesh filmmakers was an important occassion for open dialogue which gave us the unique possibility for an insight into local filmmaking.

Apart from the jury for the Women Filmmakers programme there were juries for the Asian Films Competition headed by Indian film director Girish Kasaravalli, Short and Independent Films, Interfaith Jury for Spiritual Films and the FIPRESCI jury focused on Bangladesh Panorama. DIFF also screened a collection of films in the World Cinema and Children‘s Film sections.

Another important focus of the festival programme was the education of young filmmakers and film activists organized by IFCAB (International Film Critics Association of Bangladesh) and the Pathshala South Asian Media Institute. The 8th Dhaka Cine Workshop used the presence of professional filmmakers and critics and invited them to watch and discuss the short films made in the workshop. These films were screened in various venues – The National Museum, Public Library Auditorium, Alliance Francaise of Dhaka  and Russian Centre of Science and Culture.

The lively and spontaneous Dhaka traffic with its frequent traffic jams was a challenge for the festival organizers who rose to it succesfully, thanks to their devotion and immense efforts to keep to the schedules and to create a lively and exciting atmoshpere. (Viera Langerová, edited by James B. Evans)