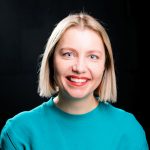 Marta Bałaga is a film journalist based in Finland and Poland. She has published in Cineuropa, Variety and regularly contributes to Finnish film magazine Episodi. She has collaborated with various festivals, including »Helsinki International Film Festival – Love & Anarchy« and its industry sidebar »Finnish Film Affair« or »Les Arcs Film Festival«. Member of the Finnish Critics’ Association SARV, the International Federation of Film Critics FIPRESCI and the European Film Academy, where she has joined the committee deciding the nominations for the European Discovery 2019, 2020 and 2021 – Prix FIPRESCI. She has served on many juries, including Venice International Film Critics’ Week at the Venice Film Festival in 2019.