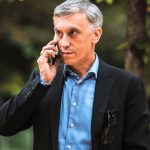 Raúl Reis is one of the founders of the association of critics in Luxembourg and the only film critic in the Grand Duchy of Luxembourg who writes in Portuguese. At the age of 10, his favourite actors were Fred Astaire and James Stewart. At 17, he produced his first radio show on cinema. Since then, Raúl has published reviews and hosted cinema shows in various media outlets (Première Portugal, Radio Ara, Contacto, BOM DIA, Público, etc.). He admires the Coen brothers and enjoys being an extra in movies. In 2019, he launched a Portuguese cine club in Luxembourg.