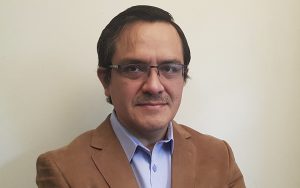 Journalist, cultural manager and film critic, born in Lima (Peru), with communication studies at San Marcos National University, and journalism and cultural analysis at Antonio Ruiz de Montoya University. He collaborated in the film magazines Butaca Sanmarquina, Tren de Sombras and Godard!. He co-founded the Peruvian website Cinencuentro (2005), where he publishes his reviews and articles, and for which he covered festivals such as BAFICI, Mar del Plata, Valdivia, and Lima. He was editor of the Mirada Líquida film section in Diario Uno. In his country he participated as a jury in various film festivals and audiovisual contests of the Ministry of Culture. He was a member of the FIPRESCI jury for Mar del Plata Film Festival (Argentina) and Guadalajara Film Festival (Mexico). He collaborated on the book José María Arguedas y el cine, by Dora Sales (2017), which explores for the first time the Peruvian writer’s relationship with movies. He has been the manager and programmer of film clubs in Lima and of the Itinerant Exhibition “The Peruvian Audiovisual and Human Rights,” which rescues and disseminates film and video productions referring to the period of political violence in Peru between 1980 and 2000, a project awarded by the Culture Ministry. He has chaired and is an active member of the Peruvian Film Press Association, APRECI.