From Failed Coup to Successful Film
“The Announcement”
By Steven Yates

In the Balkan Films Competition, Steven Yates proclaims it was the combination of masterful direction and production design that created a compelling and entertaining chemistry of tension and humour for a deserved winning film. 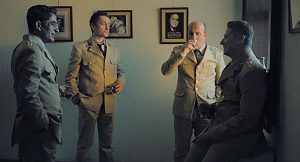 At the 11th Prishtina International Film Festival there were twelve films from Europe which were evenly split into the Balkan region and the rest of Europe, six films comprising both. The “Honey and Blood Cinema – Balkan Films Competition” section represented the countries of Romania, Greece, Albania, Cyprus, Croatia, North Macedonia, Kosovo, Turkey and Bulgaria, albeit some being co-productions and also including near neighbouring countries considered part of the region. Though relatively short in numbers, the films selected were nonetheless varied in their culture and social-political situation.

At the awards, two films from the Balkan section stood out clearly and even more so the Albanian-Romanian production A Shelter Among the Clouds (Streha Mes Reve), directed by Robert Budina, which won Best Film, Best Actor and Best Actress. However, The Announcement (Anons) from Turkey-Bulgaria, directed by Mahmut Fazil Coskun, won Best Director in the section as well as the FIPRESCI prize for Best Film.

The Announcement is the third feature of the director and has already won acclaim since it played in Venice last year where it won the Orrizonti Special Jury Prize. It is loosely based on a real event in May 1963 where retired generals, unhappy at the social and political situation in Turkey, attempt to stage a coup to take down the government in Ankara while their co-conspirators take over the Turkish National Radio station in Istanbul and announce the coup. General İsmet İnönü was Prime Minister of Turkey for a third time from 1961 to 1965 and Talat Aydemir, the Turkish Army Colonel, organised two failed coups d’etat in February 1962 and May 1963. The Announcement takes a retro period snapshot of the 1963 plan and subverts it to humorously explain, over the course of a single night, why it perhaps failed.

The film begins late one night, with two seemingly regular and harmless middle-aged men taking a Taxi in an untypically dark and rainy Istanbul, before shooting the Taxi driver when they reach their destination. The emotionless and cold-blooded behaviour of the characters, as if acting robotically to order, immediately creates a compelling and heightened atmosphere that is perhaps intended for the audience to involuntarily grin with muted unease. However, once they depart the Taxi in the middle of a deserted Istanbul night, and meet up with two other co-conspirators, the interest becomes even greater and subsequently more surprising as the wheels of their motions slowly begin to loosen and inexorably steer them off course.

Prolonged narrative silences convey solipsist thoughts and the confused complicity of the main protagonists, who ultimately find that their trajectory is frustrated. These progressive complications ensures that the film becomes more suspenseful, while the static camera shots serve to magnify the deadpan humour intended by the director, even more amusing considering that this film was based on real events. Here, one can also draw a parable to current Turkish President Recep Tayyip Erdogan and the July 2016 attempted coup d’état by the military that started and failed overnight and, with no government official arrested or harmed, inviting the suspicion that the event was staged by the government itself. This is mirrored in The Announcement by the progressive lack of feedback from Ankara and the conspirators own inefficiency, struggling to keep their plan on course to announce the success of the coup with the realization that it might not have taken place at all.

Regardless of suspicions, conspiracies, variables or parables, director Coskun and co-writer Ercan Kesal (who worked with Nuri Bilge Ceylan on two scripts) succeed in conveying a critique of power in a more internationally ubiquitous form. Further influences or allusions, conscious or otherwise, can be extrapolated from silent cinema to Jacques Tati in more deadpan form, even elements of The Blues Brothers (1980, Dir. John Landis) come to mind, but more so from the yardstick provided by Romanian New Wave films of the 2000s, particularly as a counter-film to 12:08 East of Bucharest (A fost sau n-a fost?, 2006, Dir. Corneliu Porumboiu), but sharing with these films an austere, realist and minimalist approach combined with black humour.

With its many narrative obstacles, The Announcement is a wry and clever interpretation of Turkey’s uneasy political past (and present) through its combination of satire and subtle but off-the-wall humour. The narrative sub-sketch period cultural references provide respite and hilarity and range from: breaking into singing the North Korean national anthem, a misinterpretation of the name of the famous Martini drink for the American military Martin Marietta Corporation, the failure to understand basic German, but most of all the urgent demand at a hospital to interrupt a head surgeon during a lifesaving operation so that the former generals (by this point dressed in their full military regalia) can take her home to get the keys to the radio station and formally announce their coup; all underlining the absurdity of the situation as their crisis deepens and the Police close in after the shooting of the Taxi driver.

The Announcement also benefits from László Rajk’s impressive production design and the fact that he had also recently done period work on László Nemes’ Sunset (Napszállta) the 2018 Venice FIPRESCI winner) comes as no surprise then that the film benefits from a film-noirish quality not far removed from The Coen Brothers (Colour film emulating Black and White), exemplified by low-key lighting with the deserted windswept streets serving as an appropriate backdrop. Also part of the film’s visual style is cameraman Krum Rodriguez’s almost Zen-like use of stationary mise-en-scene which creates an oscillation between drollness and intensity and the constant awareness of off-screen space.

Producer Halil Kardas was in Prishtina to pick up the FIPRESCI award for The Announcement as Best Balkan Film, and he would also do so on behalf of Coskun for Best Director.