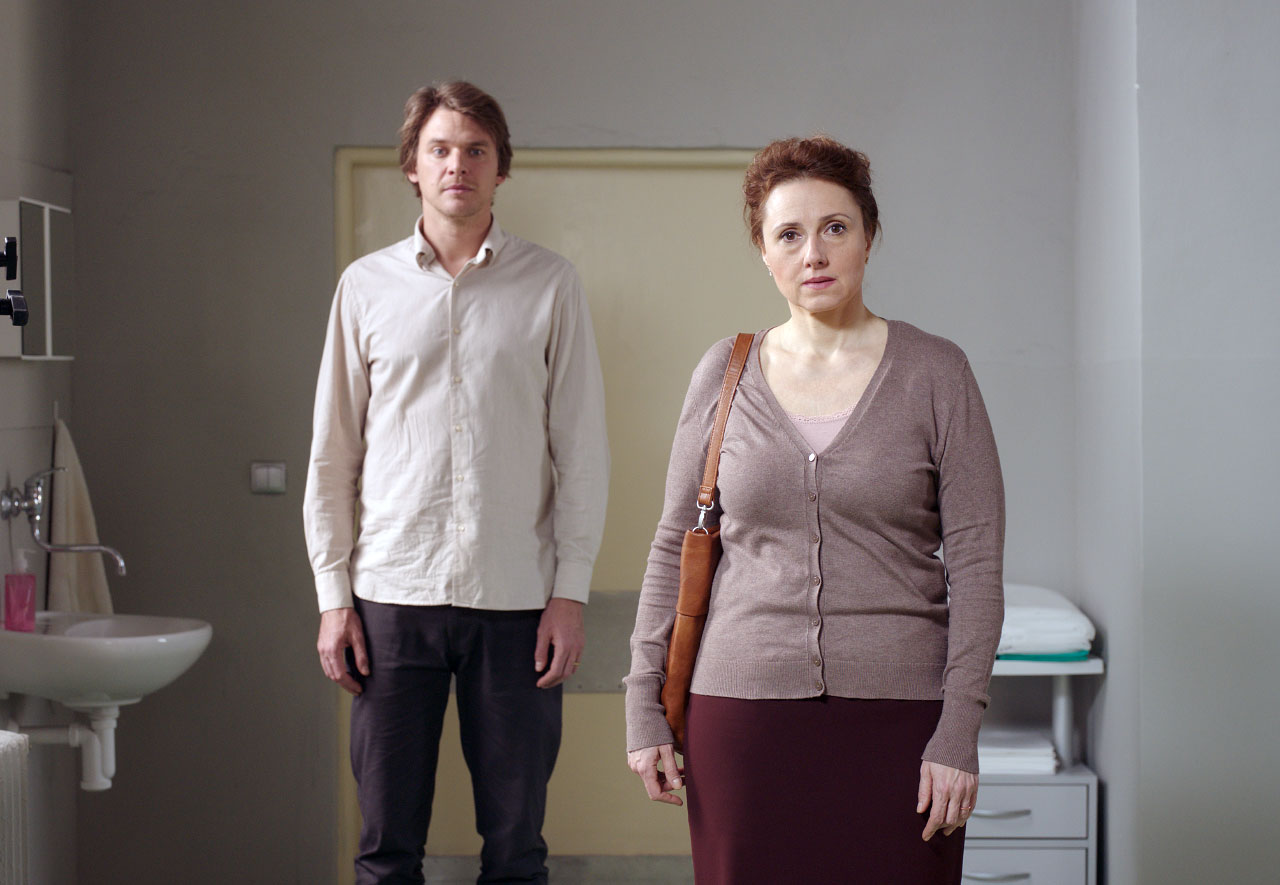 A man is crossing corridors, stairs, and handrails in a hospital. On his body, he carries a pulse monitor. On the first look, a realistic scene; on the second, we feel something is wrong. The sitting and waiting people in the corridors are primarily silent, remaining in static positions, lifeless. The only moving bodies are doctors and nurses, but we observe emotionless behaviors on a closer look. The fixed camera offering fragmenting views reminds us of Robert Bresson, an observing eye from beyond, not engaged, just documenting. The only outdoor perspective out from these scenarios without horizons thought a window only shows a neighboring building that is due to be demolished.

Where are we? This central question is increasingly and sublimely asked in Václav Kadrnka’s Saving One Who Was Dead (Zpráva o záchraně mrtvého, 2021), presented in the International Competition of the Film Festival Cottbus. Uncomfortableness is everywhere. Finally, a young man finds his mother, and both of them follow the way to the intensive care section. The woman’s husband and young man’s father is lying there, motionless. He never came back to conscience after an artificial coma in which he was the victim of brain surgery. Both speak to him, trying to bring him back, but all effort fails. Strangely enough, their behaviors also seem, in a way, lifeless. Silent gazes between them characterize their helplessness. Finally, they conclude that they have missed pronouncing the decisive awaking word. A spiritual and physical limbo overshadows all the sceneries.

The somehow absent movements accelerate through compositions played on viola da Gambas, historical instruments, by Irena a Vojtěch Havlovi. Václav Kadrnka confirmed to have arranged the performance of this music live during the shootings so that the sound inspired the acting, reinforcing the mysterious and spiritual atmosphere. The tunes of these instruments produce overtones and notes, which are not directly played but produced in higher frequencies by interferences. This sublime overlaying dimension also characterizes the visuals. In a critical scene, the mother/wife sees herself in a mirror and looks at her hand as something strange, not belonging to her. The question is explicitly pronounced: “Can we heal our cells?” In another scene, the son steps down on the cellar floor, where he is confronted with a glooming pulsating red light without further explication.

Roy Andersson’s play between realism, surrealism, and grotesque seems to be evoked, but Kadrnka’s setting is decisively metaphysical, where the Unseen and Unsaid is always present. The intermedium between life and death is everywhere. In these tense spaces, everything can happen all the time. The corridors with their often radically changing lights remind those of Stanley Kubrick’s Shining. And indeed, a boy suddenly appears at the end of a hall. He will be the only one who brings the unconscious man back to life, laying a tennis ball in his hand, but only for a second. And even this second could have been just a dream sequence, just another appearance.

A negative resurrection takes place. Son and wife get ready to let their unconscious relative go, to respect his decision to come back to life or not. “We don’t want anything from you anymore. We accept everything, and we surrender everything”. Surrendering to death suddenly appears as a liberating act. Soon after, the young man will take a refreshing shower and put away the medical measure instruments fixed on his body. The closed space finally opens up when the two doors of the lift simultaneously open up, giving way to a path into a landscape with grass and trees.

A slow film, definitely a film beyond action and plots, Kadrnka creates a memorial about human existence. He opens up to the question of what is dead, what is alive?

The shooting of his film also – like so many other ones – was marked by the Covid lockdowns. The shooting took place in an abandoned hospital. His former two feature-length films Eight Letters (Osmdesát dopisu, 2011) and Little Crusader (Křižáček, 2017) equally are focused on search and departure. Human existence appears as a non-revocable force of transformation, as well as a yearning. All three films are made in a minimalistic style, often beyond dialogue. With Saving One Who Was Dead, the announced Absence of a Loved One trilogy finds its end.

Václav Kadrnka’s Karlovy Vary premiered movie is based – as Eighty Letters – on an authentic personal experience. His father was in a comatose state for a long time. When he finally came back to conscience, he had developed new capacities. But this will be the subject of a new documentary that Kadrnka is presently working on.

Eastern Europe (and More) in Focus

Film Images of the Eastern Territory