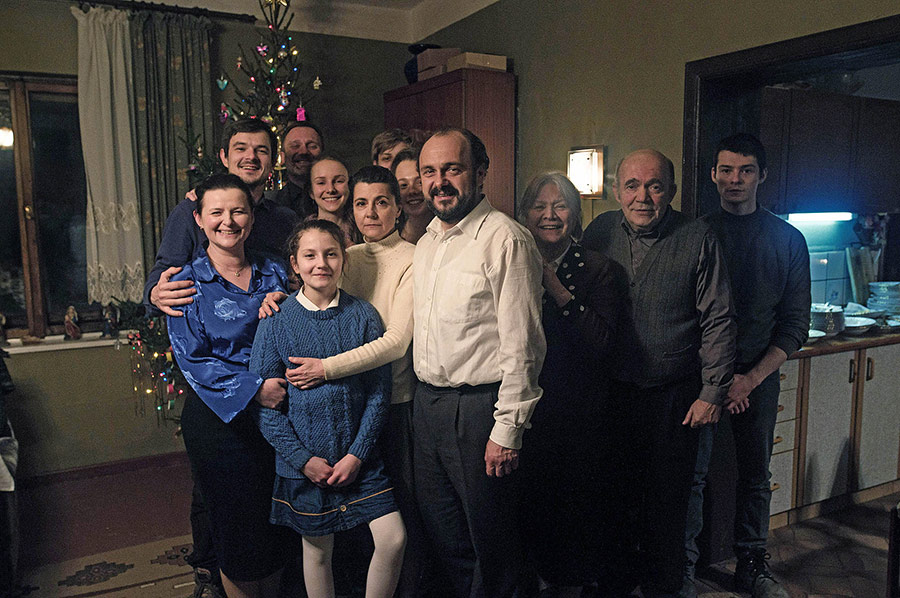 Silent Night (Cicha noc) by Piotr Domalewski, the participant of Netia OFF Camera 2018, was awarded by both film critics and the audience. What was that in this film that made everyone vote for it? Was it a meticulously chosen cast, scrupulously elaborated dialogues, or, maybe, painful political matters hidden under the personal story? No doubt, those were the reasons for it; but was that enough? The idea of showing the whole society through the perspective of one family is as old as time, and one would expect it to undergo a lot of work before gaining its fresh colors. And surely, Piotr Domalewski was not afraid of labor while working on his full-length debut.

We meet the main character, Adam, a young economic migrant (convincing performance of Dawid Ogrodnik), on his way home for Wigilia (a polish name for Christmas Eve). From the very opening scene, the director gives markers that help to define the genre: comedy and drama go hand-in-hand, creating a space for critical thinking about the world we live in without making it too tough to bear. The tempo-rhythm of the movie increases with every new scene and every new character we encounter. And it turns out it’s a lot of them we are about to meet because Adam comes from a big family, every member of which has his or her own demons to fight with…

One can really appreciate the structure of the film: there is not a gap in the plot that could be missed, and every word uttered by the characters is a matter of importance. Eventually, you found yourself absolutely carried away by the flow of the movie, you accept the rules suggested by creators, and you allow being told the most simple truths, as they suddenly become significant; after all, it is precisely because of them being simple they are so easy to forget.

Silent Night is not only very well scripted. It also works at both realistic and metaphorical levels. The most mundane problems like the division of property gradually transform into symbols that are to be ruined – or, for somebody, to be restored.

Besides, the film has its valuable universal quality. Almost everybody who decides to watch this movie will get a chance to find something that used to bother him or her at some period in life. There’s love and betrayal, friendship and brotherhood, addictions and domestic violence, outmoded traditions and bursting signs of modern life, denial and acceptance, and vain sacrifices all mixed up in this truthful and ruthlessly honest tale that comes from the small village in eastern Poland. In that place every generation has flaws, and youngsters unconsciously take after grownups. What does it matter if grandpa (tragicomic Pawel Nowisz) can’t stand a night without drinking, and his grandson secretly grows marijuana in the old cabin? There is no breaking out of their common vicious circle of economic instability, desperate but passive longing for a better life, and engraved personal uneasiness. Probably, the youngest heroine, the sister of Adam, remains the only person who was unharmed until this fatal Christmas Eve. For those who want to find a glimpse of hope, the director leaves such possibility: the hope is this pure, innocent child who doesn’t hold grudges, who can console without words, and who loves no matter what. And though, maybe, it’s all because she still knows nothing about disguised animosity between her seemingly big and loving family, that is exactly what makes us understand that everything depends on us, and no one but we can create evil or good.

What’s important, Silent Night leaves one with no doubts about what was the film about. It professionally manages to balance the director’s clearness and poetical polysemy. This movie can be compared to one deep, long, full breath, and once you’ve exhaled it, it’s up to you if you would inhale anything of that kind for the second time. But, probably, you would. The addiction to good movies can be stronger than any other in the world.