Can reality create an artistic cinematographic vision? André Bazin’s conception, making a distinction between a cinema of the image and a cinema of reality, but considering realism mostly in a stylistic sense, no longer seems to match a young generation of directors’ way of comprehending cinema. They aren’t afraid of the reality: it becomes for them, more and more often, not only a ground they draw their subjects from but also a kind of raw material which, captured in a specific way and selectively treated, becomes a film itself. Everything is a question of context: in the same way that an object of ordinary use becomes a work of art, the stream of reality and existing persons are transformed into a film story and its characters, creating a new message and an artistic value.

A very good example of this process is Ghost Song, the second film by Nicolas Peduzzi, a French director who lives and works in the United States. This time Peduzzi takes us to Houston, just before a hurricane which will fall on the city like the riders of the Apocalypse, lowering their swords upon the paltry world of humans, this kingdom of loneliness, avidity, and egoism, where the bitter taste of defeat prevails. 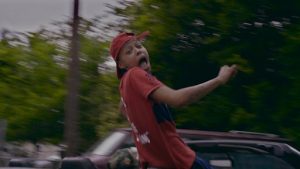 Peduzzi’s three heroes, “borrowed” from real life: the rapper OMB Bloodbath; an expansive young man who hides behind the loneliness and the loss of his closest friend; and a young man from a rich family living on the street because of his drug addiction and his inhuman uncle. Aside from their personal stories, they are symbols of the failure of the famous American Dream. At the same time, their experiences should be interpreted as a warning: the contemporary world, cruel and indifferent, doesn’t accept easy hopes. The vision of this “real” reality in Ghost Song is dark and often frightening, bringing to mind Bertolt Brecht’s The Threepenny Opera with its gang of black characters. The songs of the rapper OMB Bloodbath, cutting through the subsequent sequences, become—exactly as in Brecht’s masterpiece—the commentary. Sometimes, Peduzzi’s film makes us think of a kind of “Crack Opera”—life in Houston flows in rhythm with the drug doses, miserable jobs, depression, and the desperate attempts to stay afloat. His characters, despite their youth, have already experienced all of life’s dramas: the deaths, the loss of dearest friends, the insecurity, the death of their first and last illusions. They are 20, 30 years old but they could be 50 or 60. Those who manage to fly, like OMB Bloodbath, play on the cynicism and know exactly how to make a profit in the jungle of life; others, like William—an orphan of a rich and indifferent father—try to heal their wounds in the rhythm of rap and reggae, the only life they can still live.

Paradoxically, this choral portrait of a lost young generation isn’t an apocalyptic vision— the world they live in is apocalyptic, but the heroes are not, these victims who have lost all references. Can we lose everything and still have hope? Yes, we can, answers Peduzzi. With his patchwork story, the director offers a bitter social analysis of contemporary American society but still believes that a human being can be reborn, despite everything. So long as we don’t resign and so long as life exists, there is a place for hope. It hides in the rare moments of tenderness, reflection, and kindness. The apocalyptic hurricane destroys everything—the evil as well. After a disaster, another day will rise. Will it be better? No one knows.

Tell yourself always that it will be a good day, even if it’s not, says the mother of the rapper to her son. Ghost Song brings hope—against everything. It exists because a human being still fights, every day.

Peduzzi’s film is also a real masterpiece from the technical point of view. The director masterfully mixes documentary images and fiction, creating a new artistic dimension. He shoots reality as if he were shooting scenes from a carefully structured screenplay—the improvisations grow into dialogue and real characters, into the heroes of the screen fiction. The borders between reality and an artistic work are completely obliterated—in Ghost Song Nicolas Peduzzi manages to create a new cinematographic value. His film is set in real life, but has its own dynamic. Who knows, maybe that’s the way to a new form of film art, considered as a stream of reality captured in the frame of the director’s creativity?