Past, present, and future descended upon each other at this year’s festival. Daniel Oliveira Silva explains how the program, with two prime examples, contained films that transcended notions of time to create an inexorably ever-present effect in a way only cinema can.

The past remains alive in the present. The future is constantly being born right now. All time periods coexist simultaneously, affecting and (re)configuring each other – and our experience within them. These are all philosophical ideas that have been argued and elaborated by different people, in different ways. And for which cinema has always been a perfect synthesis: through the act of filming, the present becomes a past that will be a future present for an audience. In a movie theater, truly all time periods coexist. 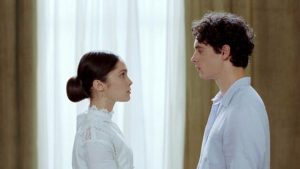 These notions were at the forefront of two films in competition at the Endless Revolutions section of the 19th Sevilla European Film Festival. The first is The Wall of the Dead (Le mur des morts, 2022), a French production directed by the veteran enfant terrible Eugène Green. In it, Arnaud (Saia Hiriart), a young man in contemporary Paris obsessed with a wall bearing the names of fallen soldiers in World War I, ends up being visited by one of them, Pierre (Édouard Sulpice), who assigns him a mission: head to the building where he used to live and deliver messages to his grandmother, his sweetheart, and his brother, whom Pierre left behind when he went to war and never had the chance to say goodbye to.

More than a generic or indistinct ghost story, The Wall of the Dead is a reminder of the old (but ever truer) saying that if we forget the past, we are doomed to repeat it. In a time when fascism keeps rising steadily all over the world, and the planet has been hit by a pandemic with genocidal effects compared only to world wars, the ghosts of the major wars of the 20th century have never been more present – and relevant. And for a younger generation, who may feel World Wars I and II as something distant, remote, irrelevant, it is fundamental to show them how close they still remain, and how the ingredients that led to their horrors are more alive than ever – not only in Europe, but all over the globe.

There is an interesting opaqueness, a lack of distinction or personality in Green’s direction of his two main actors. Hiriart and Sulpice both deliver their lines in a monotone, unaffected, and almost child-like enunciation – which, rather than being a flaw, seems clearly intentional. Through their parallel cadence, the filmmaker shows how their two time periods, past and present, are indistinct from each other: how their pains, their struggles, their doubts, desires, and passions are the same – and universal, belonging to an idea of human, and not of subject/individual. How the past, with all its feelings and trepidations, remains still alive within us today, and if we do not acknowledge it, we will fatally make the same mistakes again.

The second movie to deal with past and present was Afterwater (2022), a co-production directed by Bosnian Dane Komljen. A meditative and contemplative piece of filmmaking, inhabiting a blurry border with visual arts, this mix of documentary and visual poem observes a series of bodies within nature, in different states of leisure near a lake – or, rather, a dam that years ago drowned a whole city, which now rests underneath it.

On a purely visual sense, Afterwater is about the connection that is possible between bodies and nature, how a symbiosis may emerge between them to create a unified ecosystem. However, there is an almost omnipresent voice-over, reading excerpts that bring forth the history of the flooded city, and its residents, back from the past. Once again, the past forces itself into the present, and if those drowned people cannot corporeally show themselves on screen, the text reveals them to be everywhere in that bucolic setting, inhabiting the trees, as well as the bodies and the minds of the subjects seen by the audience. They live through them, affect them, and talk to them, not only verbally, through the voice-over, but through the textures and sensations provided by that lake and its surroundings.

Once again, it is not a ghost experience, but something almost metaphysical that turns the movie theater into some sort of gallery for an immersive installation/meditation/audiovisual séance. Because if ghosts are to be among us, there is one place they might be hiding in plain sight: the movie screen.

Cinema Touch and its Connection to Nature