An Accident That Is Not Accidental

This year, the 15 films of the Stockholm International Film Festival were very competitive:  five of them had already won awards in Venice, Cannes, or Berlin. The Hand of God (2021,Venice Jury Prize), The Power of the Dog (2021, Venice Silver Lion), Annette (2021, Cannes Best Director), Ahed’s Knee (Cannes Jury Grand Prix), Brother’s Keeper (2021, Berlin Fipresci Prize). Pedro Almodóvar, a famous director in Taiwan, took part in the battle with his new film Parallel Mothers. The often awarded Nanni Moretti, Jacques Audiard, and François Ozon also participated in the Competition. Seeing this Competition’s line-up, I would want to watch the films even as an ordinary member of the public! I felt Stockholm’s strong ambition to catch up and stand shoulder to shoulder with the three major film festivals.

After watching all the films with excitement, my favorites are The Power of the Dog, and Turkish director Ferit Karahan’s Brother’s Keeper. The Power of the Dog withdrew from Stockholm halfway for undisclosed reasons, and I, therefore, only lobbied for Brother’s Keeper. Because this film had already won the FIPRESCI Award in Berlin, our majority wanted to give a winning opportunity to other films. A jury is a process of communications, persuasions, and submission to the majority. The French movie Petite Maman (2021) by Céline Sciamma finally stood out with a majority vote and won the Stockholm Fipresci Prize. 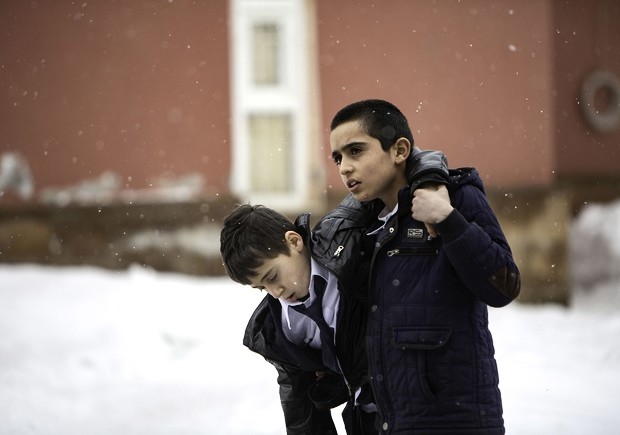 Brother’s Keeper describes a militarized-boarding junior high school in Turkey. Yusuf and his friend Ahmet are punished and ordered to take a cold shower in a heavy-snow frigid winter. The next day, Ahmet is highly uncomfortable and unable to attend class. Yusuf escorts Ahmet to the shabby school infirmary and asks the teachers for help.

There are no doctors in the infirmary, and an untrained senior gives Ahmet an aspirin without a diagnosis. The mobile communication signal is poor, the town ambulance is busy, the school bus cannot travel in heavy snow, and the only school bus with snow chains has gone to purchase supplies for the Principal’s personal needs.

The film implies that there is a lot of injustice and bullying in this school. Students are weeping silently everywhere (it may mean that there are also sexual assaults or harassment, but this is not clear). When everyone comes into the infirmary, they slide by the slippery floor at the door, and everyone must grab the doorknob not to fall (veterans know where the hidden arrows are); thus, no one ever wants to fix the slippery floor. Everyone is anxious, angry, and blames each other while witnessing Ahmet’s condition worsen.

Ahmet falls into a severe coma but has no fever at all. We finally learn that when Ahmet and Yusuf were punished to a cold bath the day before, they did not because the water was too cold. They ran to bribe the school pantry worker during the night and took a hot bath with boiling water (at first glance, I looked like the dorm supervisor sexually abused Ahmet). During the shower, Ahmet was hit on the head by an old failing pipe, which caused intracranial hemorrhage without any fever. The Aspirin intensified the bleeding in the brain.

Ahmet was accidentally smashed to death by the old pipe, but the whole accident was not accidental. The authoritarian management, corruption, inefficient bureaucracy, and outdated equipment without security checks all jointly menaced this boarding school. Brother’s Keeper concisely and powerfully accuses the whole system of the situation of a pair of junior high school friends, Yusuf and Ahmet, and for Ahmet’s life.