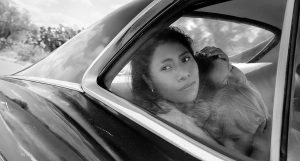 The perfectly controlled camera, either strictly still, panning or tilting, sometimes travelling with the characters, observing the spaces and their telling geometry rather than entering them. The depth of field, where the surrounding chaos often contrasts with the camera’s steadiness. Every single painstakingly precise detail in Alfonso Cuarón’s lauded film Roma, from the rigorous camerawork (under his own direction of photography) to the conspicuously meticulous mise-en-scène and production design, converges on the reconstruction of a past, recognizable in its slightest references. But that precision also reminds us that this is a past recalled, not a present lived.

This distinction is relevant to a major accomplishment of the multi-award winning film about young indigenous domestic worker Cleo and the well-off family that employs her; an exploit that does not stem from Cuarón’s aesthetic mastery, but from his ethical approach – it is the honesty of the gaze. Underlying the entire project – an homage to the woman called Libo, who Cleo stands for; while the second sibling, Paco, represents the filmmaker himself – is a complex pre-existing system of power relations. The Mexican filmmaker averts a common danger when speaking from a privileged position one has not asked for: ignoring it.

Roma acknowledges the unequal power relations portrayed in the story, which are also evident in the mere fact of who is in the position to address the issue. And then, without condescension nor guilt, but pure affection, it attempts to set it aside. The film does not try to hide or deny that it is being told by the white male employer, and that he cannot cede the first-person voice – at most try to express himself in third person. But one thing that cinema does allow him to respectfully waive to his – yes, his – character Cleo is the point of view.

There are barely any shots at all that do not correspond to her perspective (for instance, the introduction, through fragments such as a cigarette or a watch of the father as he makes his entrance in his huge car to a home that has apparently become too narrow for him), and they are mainly establishing something she is already familiar with. The moment the film leaves behind the family to follow Cleo, inside and especially outside of the house, it is reaffirming her protagonism, independently of the child witnesses. The film’s virtuosity acquires an extra meaning, apart from boasting Cuarón’s artistry and underlining the personal significance that this work has for him. The ostentatious craft is also a sign that Roma does not pretend to be a naturalistic, intimate portrait, nor introduce us into Cleo’s private universe. Thus, the film eschews a way-too-frequent flaw in all kinds of discourses, that often with the best intentions, they are unaware they are being patronizing and, arrogantly, try to speak for the other.

No one can speak for the staunch Cleo (embodied by the brilliant newcomer Yalitza Aparicio), who is reserved, economical in her communication, verbal or other – except when it comes to showing her affection to the children of the family, especially the two youngest. That part of the young woman’s emotions, Cuarón can claim to know first-hand, and he expresses it unambiguously. For the rest, what transpires is his admiration of her extraordinary force. Eventually, the film praises the strength of women in general (with most adult men playing a sad, coward, petty role). But in the case of Cleo, it embraces the awed perception of a child, unconcerned with realism. In scenes such as when she effortlessly manages the balance pose that the martial arts guru describes as nearly unachievable, or when she walks into the sea and saves the children despite not knowing how to swim, Cleo has the stuff of superheroes.