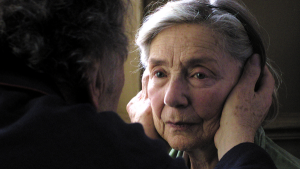 Love (Amour) opens with a terrifying scene: The fire brigade of Paris break into an apartment. The worried concierge has called them. They find the body of a dead woman in her bed, surrounded with flowers. It has been a while since she died. The rest of the film is a flashback describing the series of events that lead to her death. The answers to the question “Why isn’t she buried? Where are her relatives? What happened to her?” begin to hurt us slowly but deeply for they all relate to — almost — every adult’s inevitable experiences in old age. And eventually the story fills our eyes with tears. But rest assured that Love is not a melodrama; we cry as the result of a catharsis. Such a genuine catharsis is very rare in film. But Michael Haneke at the summit of his career as a director, achieves this level of excellence. The simplicty of the plot, the calmness of the camera, silence filling in for the music, the clarity of Haneke’s vision, his mastery as a storyteller, the solid performances of the actors and the meticulousness of art direction allow us to call Love a masterpiece. Michael Haneke clearly emphasizes that everything is meaningless without love. In the age of consumption, where love is not considered among the durables and is expected to have a three-year lifetime by certain auteurs, Haneke introduces us to an old couple living in harmony just like the music pieces they have been teaching about. A love affair, especially when it passes to the phase of marriage, goes through many tests. Anne and Georges have not failed any of them, obviously. They have tuned in each time. They are both over 80 and still together. Theirs is a very refined form of love. After all these years it is drenched from the friction of passion and the stressful struggle for the future. Then they face the only absolute truth of life: death. One last test to seal their love forever. The apartment they have always been living in is the nest of their love, it is their shelter. They have taken refuge in their home, full of discs and books, comfortable armchairs and carpets. It is spacious and illuminous. They seldom leave it to go to a concert; they have a world of two within the walls. Occasional visits of their daughter, whose marriage to a famous musician seems to have become a business partnership, does not really cheer them up. Therefore, as they return proudly, after the successful concert of a former pupil, they feel very alarmed because of an attempted break-in to their apartment. A memento mori… The next day Anne has a minor cerebral hemorrhage. Although she is treated, her physical debilitation is inevitable in time. She only trusts her husband; he is the only person she cannot do without. Death means separation. Death means the destruction of the life they have constructed together. Death means the wrong note which ruins their harmony. It is one thing they cannot be together in. The time is up for Anne, but how can Georges continue to live without his soulmate? In a climactic scene George chases a pigeon that entered the apartment through the window. The poor bird is so scared that it does not know which way to escape. The trapped pigeon is a metaphor undoubtedly… Is it Anne? Is it Georges? Both of them? Does it mean that the soul has to leave the mortal body sooner or later? As Anne’s condition worsens and she is ashamed to be seen by others Georges does his best to protect her dignity. He protects her even from their own daughter. He respects his wife when she loses her consciousness and returns to a childish state in agony. In another climactic scene, the nurse they have hired combs Anne’s hair rather harshly and does not realize she hurts her. In addition, she treats her as if she is a child. When Georges fires her, she is clueless about the reason. She protests that she turned down another job to accept this one and calls Georges “a mean old man”. He wryly replies: “I hope you are treated the way you treat your patients.” There is no room for sentimentality in this film. No unnecessary compassion, no familial bonds, no hugs, no regrets. We cry our eyes out, but it comes as a result of the film stimulating delicate parts of our memories — the illness and/or loss of a beloved one which we have already experienced, or soon will. And above all comes the instinct and intellect of a great filmmaker who has understood the essence of life and is capable of reflecting it through cinema. It is Love.