Prize, International Competition: “The Heiresses” (Las Herederas) by Marcelo Martinessi (Paraguay, 2018, 95 min). Motivation: “For it’s depection of a hidden and forbidden subject: female homosexuality in Paraguayan society. The use of subjective camera helps us to enter the gloomy universe of the two aging protagonists. A very brilliant idea used in a debut film.”

Prize, Panorama: “River’s Edge” by Isao Yukisada (Japan, 2018, 118 min). Motivation: “The jury is acknowledging a narrative both unusual in its plotting and rewarding in its storyline. Shot in a tightly framed ratio, which reflects the squeezed existences of the main protaganists, his film reveals the problematic and often anxious existences of his characters, who are given generous on-screen time for the unfolding of their dark lives. Cruel, often bleak, and sometimes told to an unseen interviewer, their angst-ridden sufferings are developed in a manner which acknowledges their origins in manga comics while being presented with a wholly original cinematic eye which doesn’t flinch from violence and sex of a strongly graphic nature.” 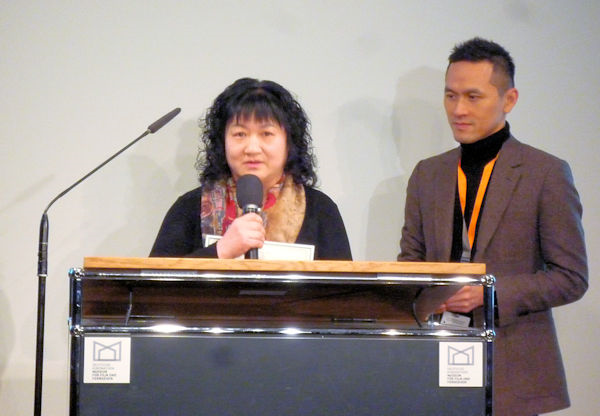 Prize, International Forum of New Cinema: “An Elephant Sitting Still” by Hu Bo (China, 2017, 230 min). Motivation: “It’s a day trip of four characters, supported by a convincing cast, that visualizes the inner emotional challenges of individuals living in China’s modern society. Following his protagonists with big empathy the director tries to show different ways to cope with indifference, negligence, rejection and violence.” Photo: Hu Bo’s mother took our prize for her son who had taken his life in October 2017, at the age of 29.