Review of The Kiev Trial by Sergei Loznitsa 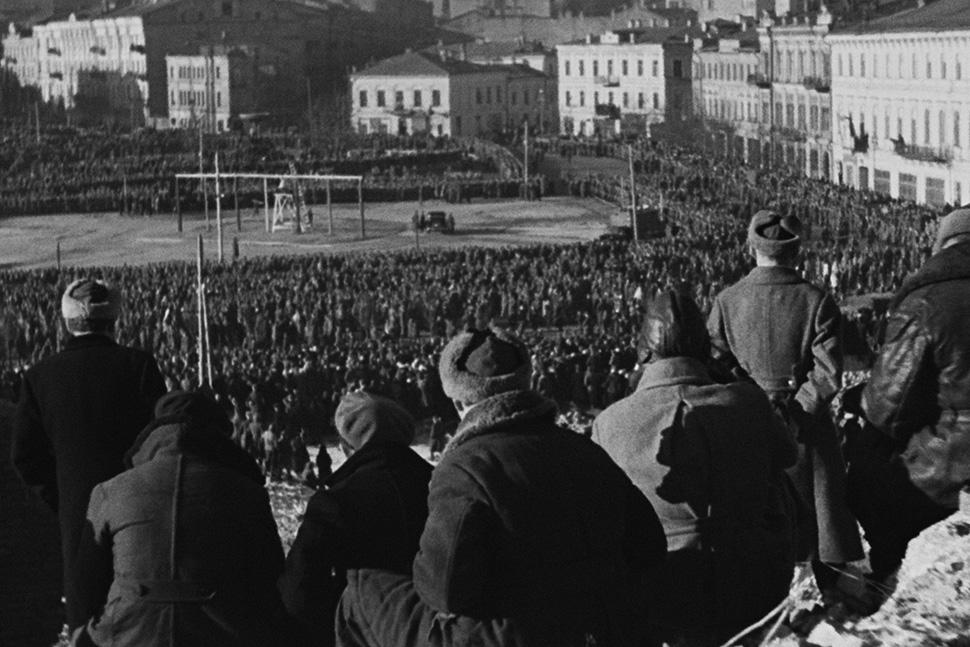 It is a film like no other that takes us back almost 80 years, to the end of the Second World War, when the Soviets put on trial in Ukraine (then the Socialist Republic of Ukraine, an integral part of the USSR) the Nazis and German army officers who committed almost unspeakable atrocities. A documentary for history, therefore, and for memory, but which resonates strangely at a time of the invasion of Ukraine by Russia and the war crimes committed at this very moment.

Sergei Loznitsa, born in Belarus and raised in Ukraine, is not a dogmatic or Manichean filmmaker, and that is what makes his films and his speech so powerful. In The Kiev Trial, as in his previous documentary on the ravages of Allied and German bombing during the Second World War on civilian populations, The Natural History of Destruction, he reconstructs forgotten events because they are often deliberately left in the dark and shadows. Stalin had also taken care, as a good revisionist, to erase the traces of this Kiev trial to punish the Ukrainians for having, in some cases, collaborated with the enemy. Loznitsa has meticulously brought back to life this trial and, like a puzzle, assembled the scattered reels of film to give a chronological and global vision of the event. It is above all a meticulous work of archivism, editing, and work on the sound to which he devoted himself.

The filmmaker’s native language is Russian and, while remaining a total opponent of the bellicose Putin, he does not condemn Russian culture or its artists. These details are necessary to understand the complexity of thought of a filmmaker who, before all the others—in 2018—spoke in Donbass of the latent war of the same name led by the Russians since 2014. Russian power, champion in disinformation, made the filmmaker look like a fanciful partisan pretender, and the film was first seen as fiction, as it related what was happening on the soil of eastern Ukraine.

Loznitsa takes a step back here and returns to what has been called the “Kiev Trial” or the “Kiev Nuremberg,” in January 1946, which took place almost concurrently with the Nuremberg trials. The film begins with the presentation of the fifteen German officers who, under orders or directly, committed the worst atrocities on civilian populations, and in particular Jews, including some in Babi Yar (the subject of a previous documentary by the director). Crimes that were called, after Nuremberg, “crimes against humanity,” and the actual account of Nazis or Wehrmacht officers are edifying, and of untold cruelty. The film is constructed in such a way that it gives voice to its soldiers who acknowledge all of their crimes, with a few exceptions. This process allows the viewer to become a witness, both to these testimonies, but also to those of the victims. Between each of the interventions, whether it be those of the causes such as that of the victims, shots of the crowd, faces of men and women reminiscent of the great era of Soviet cinema. The recording of reality is a cinematographic weapon which here shows all its strength through the editing and the sound continuity given to the story. A woman tells how, with dozens of other villagers, including children, they were machine-gunned in front of a huge hole serving as a grave, and how she miraculously escaped death by pretending to be dead. Buried alive, she was able to escape thanks to an instinct for survival and an extraordinary lucidity, by scraping a little earth to allow her to breathe without attracting the attention of her executioners.

This is just one of many testimonies that are presented here. A trial film, therefore, which continues with the last words of each of the defendants who all accept their fate and acknowledge their guilt. One can be suspicious of the veracity of the confessions of a German soldier who says he was well treated by the Soviets: propaganda or reality? We will never know. The film ends with the execution of those who have been unanimously and fully condemned to death. A punishment by hanging, in a public place, in front of a colossal crowd. A well-established ritual with the trucks bringing to the gallows the monsters that appear here like lifeless puppets. The rope around their necks, they hang in the void. Has justice been served? The barbarism of some refers to the barbarism of others. And one cannot help but think of the war crimes being committed in Mariupol or elsewhere in Ukraine right now by a Russian army (or the Wagner squad) made up of obedient soldiers, blind (?) to the cruelty of the orders they were given.

The Kiev Trial is therefore a moment of reconstituted history, but which remains fragmentary, and which in no way explains barbarism. The barbarians, to the Greeks, were those whose language and thought was foreign to their humanity. Here, justice does not seek to understand, but to punish, perpetuating the cycle of violence. At a time when the fighting is raging on both sides of the Dnieper, it will be a question, when it has stopped, not to forget it. So as not to repeat again and again the same story of (in)humanity.

Finally, one last word about the title: I use the Russian spelling of Kiev, obviously intended by Loznitsa himself, while Ukrainians now spell their capital Kyiv.

Victims of the World and One Another