Comala: Searching for the father in a narco culture

In Mexico when to accept a position you think is below you, you say, “A job is a job.” You can also use the phrase to comfort a friend who accepts a position because he really needs to. This phrase could be applied to a boring job or a physically demanding one, a clerical position or, as is the case in Comala (2021), a documentary screened in the 36th Guadalajara International Film Festival or FICG, a directive to kill. 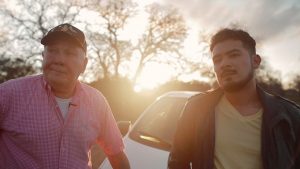 The search for the father is a recurring theme in world cinema and it is the main subject of three films at FICG ’21: Karim Ainöuz’s masterful documentary essay O Marinheiro das Montanhas, The Gigantes, a road movie directed by Beatriz Sanchís, which follows a an adolescent, queer Thelma and liberal-as-always Louise as they travel across the US-Mexican border, and the aforementioned Comala, directed by Gian Cassini. In The Gigantes and Comala, the progeny knows their fathers are dead, while Ainöuz knows his father is in Paris while he is in Argel. These protagonists aren´t looking for a physical person but, rather, for answers, for the comprehension of an unknown predecessor. Why is it that he never comes back? Why does he ignore them? What was so important, magical, or wonderful in that other place? In Comala, the pivotal question is: was my father a sicario, an assassin for hire? Was he able to kill, or did he even enjoy killing, for money?

In Juan Rulfo’s seminal novel Pedro Páramo, Juan Preciado goes to Comala “because I was told here is where my father used to live, one Pedro Páramo.” Gian Cassini does not have such an easy directive; his situation is more complicated: he knows where his father lived and where he died, but the reason why is elusive. Just like Pedro Páramo, James Cassini, a.k.a. “El Jimmy,” Gian´s Father, was sometimes cruel, and lived and fathered children with with several women. But the similarities end there: El Jimmy was not influential or made a difference in any of the cities he lived in. He was always a small-time thug, whether as a drug trafficker or as a hit man. He never got the money, the power or the showy richness associated with narcos. Not even the fame: the headlines on the newspaper articles announcing his demise read “Dead sicario,” without mention of his name or alias.

As Gian confesses in the first five minutes of Comala, he subconsciously knew how his father earned his living. Gian is looking for something else, and searches for it in seven states on both sides of the border. Maybe he wants to know better his uncle Deker, who is fresh out of jail; maybe he needs to know the circumstances of his half-brother’s death; perhaps he longs to find his grandfather. Or something more primal: to know if he is dammed to a life of violence, as all his male relatives are. A life where the use of weapons began at an early age, where a man refers to an AK47 as “my baby”.

Cassini, the 30ish director and co-scriptwriter of Comala has a lot of screen time; too much, in fact. Was this an aesthetic or narrative choice? Maybe it was a psychological one. First, he wants to show us his physical resemblance with his father, which is much stronger than that of his brother’s. But then again maybe he just wants to be present, on screen and in the lives of those around him. He doesn´t want to be a shadow or the figure behind the camera but, rather, the interlocutor of the conversation; a face that can’t be easily forgotten.

Luckily, Gian is not easily placated. He doesn’t believe his mother’s denials, his uncle’s justifications for a narco-economy, or the detached explanations of his half-sister: “Probably my father could have had another job, a humble one, but it was his choice. A job is a job.” Gian didn’t believe them and continues the search, and he—and the audience—are rewarded. He makes peace with some of his findings: a mythomaniacal grandfather and his father’s romantic partner, who delivered him to his enemies. Mostly he is rewarded with the complete acceptance of his mother and the warming welcome of his late brother’s family. Even Pedro Paramo’s Juan Preciado would have been happy with that.