The Genius Loci of Documentarist

From 25 to 30 of June 2022, Istanbul welcomed a variety of documentary films and devoted cinephile fans at the famous İstiklal Avenue neighborhood. This elegant pedestrian street whose modern name translates from Turkish as “independence” certainly helps the Festival founders: Necati Sönmez, Emel Çelebi, and their committed team in creating a special and unique atmosphere at the various İstiklal chamber venues such as French Cultural Centre, Cinema Majectic, and the Festival Headquarter at the Avrupa Passage. Famous for its cosmopolitan mix of European and Asian culture, İstiklal flows into the Taksim square, an important venue for political protests. The genius loci for the interaction of the arts and politics were presented at the 15th Documentarist program. The Festival hosted 70 films, various workshops, interviews, forums and panels. 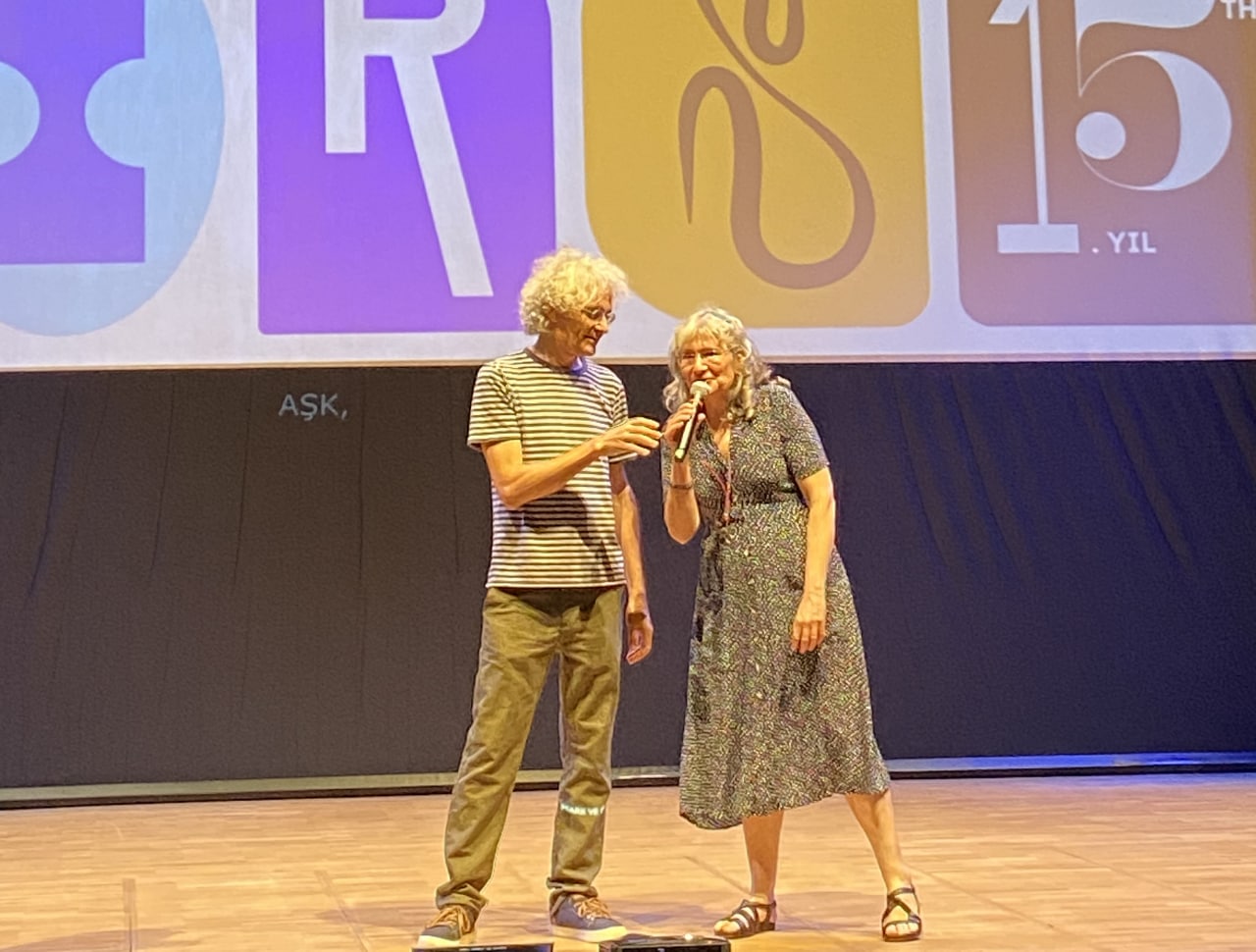 The opening ceremony of the Documentarist 15th edition was held in one of the country’s major concert halls – Cemal Reşit Rey Concert Hall – which enabled the assembly of a large audience. It was especially appreciated after a long pandemic time of gatherings, absence, and life over Zoom. The house was full and the opening film was met with huge applause. It was Love, Deutschmarks and Death by the Turkish-German director Cem Kaya. The Istanbul Documentary Days started with this film and ended with awarding it the FIPRESCI prize at the French Cultural Center.

The Festival has hosted a FIPRESCI jury since 2014.  In 2022 it was composed of three international critics: Natalia Moussienko (Ukraine), Övgü Gökçe (Turkey), and Teresa Vena (Germany). The FIPRESCI award went to Love, Deutschmarks and Death (Germany, 2022, 96 min) “for its deep research effort, multilayered approach to culture and strong impact. The jury awarded this inspirational film for the contribution it makes to the better and mutual understanding of the value of cultural diversity, restoring the dignity of those who are historically and culturally neglected”. The film was not the first prize awarded to Cem Kaya at the Documentarist. At its eighth edition, in 2015, the director was awarded for his film Remake, Remix, Rip-Off: About Copy Culture & Turkish Pop Cinema.

Love, Deutschmarks and Death is Kaya’s most recent work. The film had its world premiere at the 72nd Berlin International Film Festival in February 2022 in the Panorama section, where it won the Audience prize. This documentary essay tells the story of the largely unknown musical culture of the Turkish guest workers in Germany, the Turkish labor emigration to Germany starting in the early 1960s. Besides its fascinating storytelling, it is definitely an anthropological research of immigration through its culture, precisely through its mass culture, popular songs, and their performers. TV shows, live concerts, millions of tapes, and interviews with the stars vividly demonstrate the dimension and popularity of this Turkish culture in Germany.

Love, Deutschmarks and Death refers to several structured sections of the Documentarist besides the FIPRESCI Selection: Archival Documentaries, Turkey Panorama, Country in Focus: Germany, Music and Dance documentaries. One can really appreciate the archival studies on the topic that creates a mosaic picture of the important social strata. It was exciting to have feedback from the Turkish colleagues in Istanbul about this musical subculture and to find out that it was practically unknown to them. However, it already recounts several generations of artists who developed independently of their mother country in the immigration. On the basis of the film’s concrete material and stories, one could go further in questioning about the interference of the national culture and its immigration counterpoint. In a world, which today faces big waves of migration, such an issue becomes more and more demanding. The film could be used as a tool and inspiration not only for film studies but even for anthropological studies.

The accent on the archive studies at the FIPRESCI selection of the Istanbul Documentary Days 2022 was strong and evident: Nelly and Nadine by Magnus Gertten (Sweden, Belgium, Norway, 2022,) discloses personal archives and uncovers a remarkable story of the love between two women that started in the Ravensbrück concentration camp and how this love could have survived for the decades after WWII. The director managed to find the right tone of his story, through the granddaughter Sylvie of one of the heroines, which was always difficult because of the prism of old letters and notes. Together with Sylvie, Magnus Gertten delicately discovers this untold love story step by step, during a whole year. At the Festival workshop, Gertten shared his experiences of using archives in this and his other several films and how he found this particular love story.

The workshop focused on the challenging issues of archival footage using: from technical one to moral. It also hosted filmmaker Aliona van der Horst who presented her film Turn Your Body to the Sun (Netherlands, 2021) in the FIPRESCI selection. The filmmaker also used the archives of WWII trying to break a long decades’ silence about the victims of two dictators Hitler and Stalin. There were millions of Soviet soldiers once imprisoned by Hitler and then put in the GULAG camps for long years by Stalin. The filmmaker uses the technique of archive re-appropriation to tell her film story. Hopefully, this technique and expertise in WWII archives helps the author in her understanding of the ongoing Russo-Ukrainian War and the Russian destructive and killing dictatorship for her eventual project.

An elegant film story by Robin Hunzinger, Ultraviolette and the Blood-Spitters Gang (Ultraviolette et le Gang des Cracheuses de Sang, France, 2021) narrates the times of a century ago with the help of a collection of personal letters. It tells us about the secret love of young women, the tragic circumstances of tuberculosis, with a tribute to avant-garde cinema and literature.   The film Little Palestine (Diary of a Siege) by Abdallah Al-Khatib (Lebanon, France, Qatar, 2021) was not programmed by the Documentarist in the Archival Documentaries section. However, the film is already an archive itself about the district of Yarmouk (Damascus, Syria) sheltered for the decades the biggest Palestinian refugee camp, saw its rebelion and a siege from 2013 on, while depriving of food, medicine, and electricity. The filmmaker was born there and documented its inhabitants’ uneasy daily life from 2011 to 2015. So, the film could be regarded as his personal archives and could be used further for developing other stories for understanding and revealing the truth of the siege, of those hundreds of lives that were irremediably transformed by the war of the Syrian dictator.

One cannot but mention another film using very special archives and standing apart in the selection Koudelka: Crossing the Same River by Coşkun Aşar  (Turkey, 2021). These are stone archives, and their reading is the focus of the  photographer Josef Koudelka’s journey through ‘Ruins’, which covers more than 200 Hellenistic and Roman ancient cities he photographed for the past 26 years. Certainly, it is a kind of exaggeration that proves however that the Documentarist 15th strongly focuses on the archival documentaries in the FIPRESCI selection. The focus is important and worth appreciation, as all 15 years devoted to the promotion of documentary cinema by Necati Sönmez, Emel Çelebi and their team.

Music as Part of Identity