The Age of Anxiety

The ironically titled Beautiful Beings and what epitomizes the teenage rites of passage are the focus of Guðmundur Arnar Guðmundsson’s film. Davide Magnisi extrapolates the seemingly counter emotions of violence and tenderness in the search for acceptance in the world. 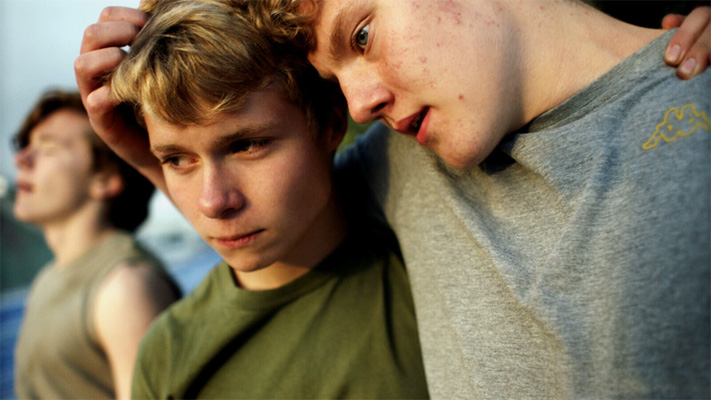 The films competing in the 2022 edition of the (Mastercard sponsored) Krakow Off Camera Cinema Festival offered a fascinating journey into Europe’s best independent cinema. The Fipresci Award went to Beautiful Beings (Berdreymi) by Guðmundur Arnar Guðmundsson, his second feature film after the already acclaimed Heartstone (Hjartasteinn, 2012), another story concerning the formation of adolescent identity.

Beautiful Beings follows the idle life of a group of young boys against the backdrop of the magnetic and hostile nature of the Icelandic landscape, in an everyday reality inexorably marked by violence. It is a physical cinema that mixes the destructive impulses and the dramatic need for love during adolescence. The two opposite poles of the film are the characters of Kolli and Bulli. Kolli is the most violent of the pack, in his constant search for physical confrontation as a necessity to solve the evils of the world and his own personal demons (see the relationship with his feared father), in an often distorted perspective of friendship and brotherhood. Bulli, on the other hand, is fragile and defenseless, the son of a history of abuse that marks his destiny: a victim inside and outside his house; when he is hit in the face by a group of peers and is forced, during his convalescence, to wear a mask, he visually becomes the symbol of an almost alien otherness, his face and movements become the embodiment of a grotesque distortion, mixed with helpless tenderness.

Although the tall and strong Konni is the leader of the gang, it is Addi who emerges as the central figure in Guðmundsson’s story. He is the first among the boys to realize the consequences of his actions and shows compassion towards Bulli being bullied. Addi decides to adopt the misfit Bulli into his gang, giving him a new life through friendship. Addi lives with a mother who is often out of this world, a psychic who is sometimes able to sense invisible things, and this gives Guðmundsson an opportunity to interweave brief dreamlike visions into the film. Many of these dreams reveal Addi’s most intimate anxieties and insecurities (threatening and disturbing visions of bodily metamorphosis).

Violence extends to all relationships and is the connective plot of the film, as if it were the only possibility to shake up the stillness of life, with its daily injustices and oppressions (and adults are even worse: from older friends to parents). Even friendship manifests itself in bodies beating or choking each other, often defying common sense. The same concept of friendship, in the film, is almost a kind of struggle to reach a status among the boys, conjugated with a certain notion of loyalty and solidarity, all declined in the masculine.

The young protagonists try to shape and overcome their adolescent insecurities according to a traditional and rigid code of masculinity, hurting themselves and the people around them in the process of searching for an identity, struggling to find a way of being accepted in the world as individuals and as a group. This self-projection is based on aggression and continuous forms of violence, but the strong bond of friendship that the boys share provides them with a temporary shelter from the outside world; they take care of each other, have fun, challenge the world, defend and protect themselves together. The director portrays this coexistence of masculine aggression and defenseless tenderness with vivid and richly structured images. The camera often gets very close to the characters, captures their gazes or more minute gestures, emphasizing the luminous Icelandic nature that surrounds them, enhancing a magnificent close-knit cast of very young actors.

No Keeper of the Frame: Two Looks Off-Camera