Perceiving influences that range from Michelangelo Antonioni to the Polish School of the 1970s, Tereza Brdčková otherwise commends the original use of this eclecticism in director Aga Woszyńska’s competition entry and considers it a small masterpiece. 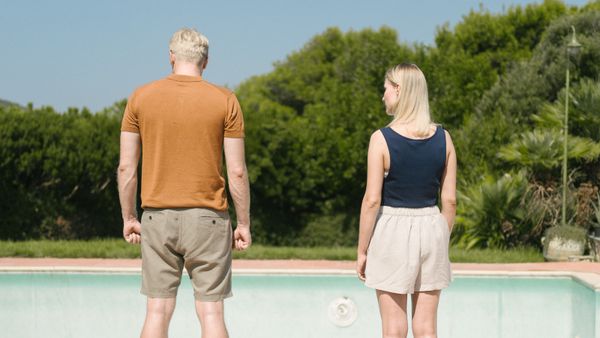 Silent Land (Cicha Zemia, 2021), the first fiction film by young polish director Aga Woszyńska, is a cinematographic jewel. There is a strong influence of Michelangelo Antonioni and his masterpiece

L’Avventura (1960) and, at the same time, this is a film rooted in the Polish traditional school Cinematography of ‘moral unquiet’ that runs from the beginning of the 1970s, especially in the films of Kieślowski, Zanussi, Wajda and their heirs. The third and main virtue of Silent Land is the hot actuality, but the film language is so complex and indirect that the story has a chance to stay timeless.

It brings also an interesting testimony about the new generation of Eastern European filmmakers. For Aga Woszynska, the gap between ‘Western’ and ‘Post-Communist’ Europe is definitely closed, at least for the well-educated and well earning hipster and bourgeois class generation. The couple, Anna and Pavel (Dobromir Dymecki, Agnieszka Żulewska) is seemingly exemplary: Nordic blond, self-confident and tired.

They simply arrived to spend a perfect holiday somewhere on the Southern Italian coast, or maybe Sicily or another island.  We see them opening the cozy villa on the rock – no neighbors, just nature.  A little easy – peasy style, and empty swimming pool.  The couple calls the owner, who is visibly in trouble to find a worker to repair the swimming pool, but he finds the solution.

The next day, the beautiful and independent Arab young man comes. Anna and Pavel observe him working, but they have no intention of communicating with him, and besides, the Arab man does not speak any English.

On the third day, the Arab is dead, found drowned in the half empty repaired swimming pool. What happened? The official police statement says the same as Pavel and Anna. When the ambulance came, the man was already dead after he hurt himself and then by accident would fall in the swimming pool. But the old ‘Carbinieri’ commander knows the same as Anna and Pavel: The man died because Pavel and Anna did not try to rescue him and they only called the ambulance. But the young Arab man was also working illegally and the truth in the police protocol would be embarrassing not only for Pavel and Anna, but also for the owner of the house, who at the same time is the owner of the restaurant and leading citizen in the old village.

Now it is up to Anna and Pavel to face their bad conscience, their self excuses (that they could not do anything anyway). All this forms the background to the beautiful but progressively very wild nature (a la L’Avventura), a picturesque and unknown village and its population. Also, we understand more and more about the local problem: The gradual arrival of the boats with refugees and migrants kills the tourist business, causes military interventions, and no one wants to talk about it.

In this village, everyone owns something for the benefit of others. There is a diving school operated by an ageing French adventurer and his young pregnant wife. Anna and Pavel start to learn diving, but the tense atmosphere grows. Although both partners are rational and emotions are almost excluded from their relationship, the shadow of a dead migrant will stay a part of their relationship as a ghost-provoking hatred and distance. Eventually, Anna and Pavel lose their new friendship with the strange couple.

Silent Land is not constructed to give answers, but mainly to pose questions. Just like in L’Avventura, we never see what really happened. The answers are not in the film, but in the mind of the viewer. All this is thanks to the great screenplay written by the director and Piotr Litwin. Also, credit goes to the beautifully mastered directing of Woszczynska, to the cinematography by Bartosz Świniarski, and most certainly to the editor Jaroslav Kamiński (also responsible for editing the Pawel Pawlikowski films Ida (2013) and Cold War (2018).

The Thessaloniki International Competition is traditionally an astutely programmed collection of remarkable authorial discoveries from all over the world. The FIPRESCI prize here is right on place. This film is a small masterpiece.

The Wave of Isolation