Of Dogs and Men

Animals have always affected sentiment in humans and the case in cinema is no different. Here, Jean-Max Méjean underlines how prominent animals unwitting roles continues to be, with many examples from the festival.

One thing is certain: Today’s cinema does not forget animals, probably because they are much more poetic characters than humans, who have not yet been replaced by humanoids. But science is no longer fiction; artificial intelligence is advancing by leaps and bounds. This is probably also because the industry is increasingly influenced by ecology and animal theories. Regardless, in fact, at the Golden Apricot festival in Yerevan, one could not ignore the small and large dogs that cross most films. I had fun counting them and there were some in all the films, often furtive, not necessarily leading roles, but they are less easily forgotten than certain starlets of the 1960s. In The Apple Day by Mahmoud Ghaffari, to which we awarded the FIPRESCI prize, it is not a dog but a little chick that a shopkeeper gives one day to the young boy in the film, the one who will do everything for his father to find his honor, lost after the theft of his van. Italian neorealism comes to mind, but the apple thief is not the same as the one who stole the bicycle in Bicycle Thieves (Ladri di biciclette, 1948). Here, the little chick will become prominent, so much that the child Mehdi will not be able to bring himself to sell it for it to be killed, even if it is to gain a little money to buy some apples for his classmates, like the teacher asked him.

In I Am Not Lakit, by Marie Surae, the dog passing in the street, as if lost, can of course be a metaphor for Lakit, this young man without a family and almost without a past who is trying to relive. In Jumana Manna’s Foragers, the dog is featured on the movie poster. Republic of Silence by Diana El Jeiroudi is a long documentary of more than three hours back and forth telling of torn Syria and several European countries, in particular the city of Berlin, where a dog trails the couple like a mascot, as a proof of still being alive, because the dog is often much more photogenic and affectionate than the majority of humans. Revolivetion, by Ara Tchagharyan and Artashes Matevosyan, recounts, through anonymous videos, the days of revolution in 2018’s Armenia, when people revolted to drive out corrupt leaders. We discover, of course a dog passing through the demonstration, with its reassuring presence being a proof of life. Rojek by Zaynê Akyol is a very sober and almost tragic film in its way of questioning up front the prisoners who were involved in the Daesh movement. We still end up seeing in the desert a stray dog. Sonne, by Kurdwin Ayub, is a beautiful film, awarded by another jury of the festival, and features beautiful girls who ‘lost their religion’. In some movies they constantly watch their mobile phones, being told who is the most beautiful. We see dogs, fishes and birds passing by, making poetic incursions to say the least. However, for The Exam by Shawkat Amin Korki and for A Room of My Own by Ioseb “Soso” Bliadze, there were no such recollections of animals in the shots, not even furtive ones. 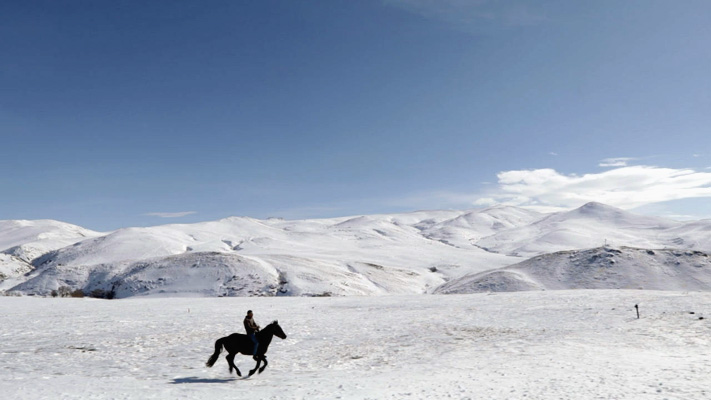 I remember when I was young, I wrote a script in which all the characters were dogs. It was flatly refused. Now I think it would be a hit if I pull it out. Even in Kirill Serrebrennikov’s Tchaikovsky’s Wife, there are two dogs jumping in a Moscow living room and a leashed dog passing through a snowy street. And, of course, in our selection of regional films, 5 Dreamers and a Horse, an Armenian film by Vahagn Khachatryan and Aren Malakyan, the horse, another sad animal domesticated by ungrateful people, is present even in the title. And although we see it very little in the film, the horse no longer leaves us, as when we witness a cow giving birth and two cows looking at us. It also seems that kittens are the darlings of social networks. We certainly see a lot of them, but the dog is almost omnipresent in the cinema, as if directors want to capture what Hegel was already saying in the 19th century when talking about man’s best friend, whose gaze is full of a melancholy that man does not know how to express. In fact, we are back today to the long-held idea that the dog is a ‘domesticated wolf ‘. In reality, dog and man have co-evolved: It is the dog that somewhat domesticated the man. Historical records claim that the dog appeared 45,000 years ago when homosapiens were in full mutation. This is why dogs are so important, and not just to filmmakers.

A Neorealistic Portrait of Iranian Society