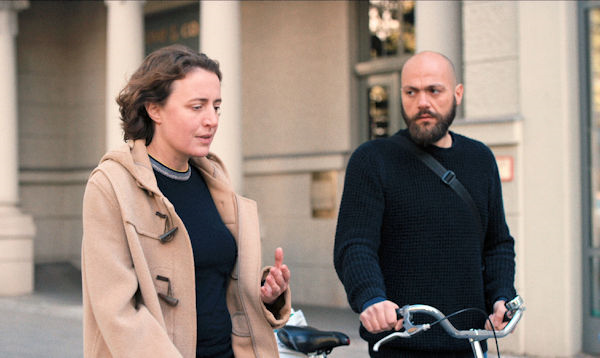 Of Alibis and Shields: Rhetorical Filmmaking and the Role of Criticism

Everyone who has experienced the atmosphere of a major film festival in recent years can testify: rhetoric is all over the place. We can see it in the plethora of press materials that come with every film about to be released, the increasingly long programme notes, the verbose behaviour of filmmakers during Q&As and, most importantly, within the films themselves. Strong dispositifs, self-aware narratives, reflexive structures, essayistic procedures, all point to an environment dominated by high conceptualisation and the proliferation of discursive approaches to filmmaking. This thick rhetorical harness is built in and around the films we see today (the Berlinale programme contains many examples) and it poses new challenges to film criticism.

The former film critic Pierre Léon, one of the most lucid filmmakers working today, has a word for it: critical exoskeleton. In a recent interview with him for Cinética magazine, he told me about his decision to not watch any new films until a year or two after the premiere. “There is a critical exoskeleton attached to every movie opening now. Everything is explained. We already know everything: how it was filmed, whether it is a masterpiece or not etc. What remains then to the viewer? Practically nothing”. What Léon recognizes in the critical culture can be found also in the very skeleton of films. A great symptom is THE PLAGIARISTS (Peter Parlow, USA), playing in Berlinale Forum this year. Brilliantly constructed, the film takes the questions about authenticity that are found in the narrative and materialises them in the formal aspects, constantly plagiarising texts and mimicking other films’ styles of framing, editing and acting. But since we enter this game of self-referentiality and understand the broader problems the film is dealing with – racism, cultural assumptions, and so on – our work as a viewer is kidnapped by the structure, leaving no space for active engagement other than to decipher the clues of an intellectual game.

In Angela Schanelec’s I WAS AT HOME, BUT (ICH WAR ZUHAUSE, ABER, Germany/Serbia), playing in this year’s Competition, there is a scene where Astrid, the middle-aged female protagonist, is talking to a young filmmaker. After her impressive critical analysis of a scene in his film, he reacts by telling her all about his intentions and how beautiful the process was. She directly answers: “But that’s a different matter”. During the scene, he seems mesmerised by her arguments, with a slightly open mouth, as if she were speaking another language.

In today’s film culture – especially, but not exclusively, in festivals – Astrid’s simple answer seems completely alien. The border between forms and ideas is blurred, if not completely erased. To a great extent, intentions have taken the foreground, leaving formal choices, dramaturgy, and the very materiality of films to the background. The filmmaker’s perspective is no longer just a privileged one, but the ultimate one. As if intentions – instead of form – have become the definitive anchor for critical judgement. “Never trust the teller, trust the tale”: an old lesson from D.H. Lawrence, re-evaluated by Susan Sontag in her classic essay “Against Interpretation” (1966), seems to have been completely forgotten as basic advice for a critical approach to works of art.

Very often, films themselves become an incessant demonstration of intent. This is evident in THE PLAGIARISTS, but also in Jean-Gabriel Périot’s OUR DEFEATS (Nos Défaits, France), screening in Forum. In Périot’s film, an intelligent dispositif is created to construct bridges between the ideals of May ‘68 and a group of contemporary teenagers in a French school. Within ten minutes, we notice that their answers to the proposal are proof that the concept is not working, but instead of changing his path, the filmmaker insists on constantly reaffirming his original intention. In the epilogue, we have the material evidence of how it could have worked, but the filmmaker had already decided to keep his perfect flop untouched.

In his once influential, 1967 essay “The Death of the Author”, French critic Roland Barthes championed against a literary culture tyrannically centred on the author and analysed how the self-imposed task of modern artists – from Mallarmé to the surrealists – was to kill the author for the sake of art. Again, it is sufficient to go to any film festival to witness how the author not only remains undead; what we are experiencing now is a zombie epidemic of author-centred rhetoric on filmmaking.

A great symptom is MOTHER, I’M SUFFOCATING. THIS IS MY LAST FILM ABOUT YOU, a film by Lemohang Jeremiah Mosese, a director from Lesotho also showcased in Forum. Through stylised images of poverty and sorrow in his homeland and the monologue of a suffering protagonist trying to escape this infernal imagery, the film draws an image of Africa as a damned land fated to ruin, and of Berlin as a welcoming paradise for those who have escaped. One of the roles of criticism, as Sontag put it, is to resist the transformation of artworks into author statements. But in a film like this, the authenticity is so tightly constructed – through a subjective perspective, private words, and intimate sound design – that it becomes an alibi against every possible criticism of the film’s very problematic ideological discourse. The fact that the director is African – and claims in an interview on the Forum website that “these are real stories and thoughts” – also creates a sort of barrier to the critique of a discourse that could be easily characterised as neocolonialist.

To play devil’s advocate, we could look to Jean Douchet’s highly influential article “The Art of Love” (1961): “Criticism is nothing more than an attempt at communion between two sensibilities, that of the author and that of the amateur, in and through the work, in and through the specific art of that work”. Douchet defended a concept of criticism as a work of capturing, maintaining and prolonging the vitality of a work of art. But in an overly rhetorical film culture, where every film seems to be born with a manual for how to approach it, this dialogue between sensibilities can easily be confused with simply paraphrasing – consciously or not – what the filmmakers think about their work.

An urgent task for criticism is to, within every single article written, defy the discursive framework built by films themselves or around them by filmmakers, press agents or programmers. This seems somehow obvious in negative reviews – part of the job is always deconstructive – but it can get especially tricky with the films we love. How do we defy the discursive framework built in and around a new Godard film? And yet, it is even more important in those cases. A crucial part of the critic’s job today is not only to recognise this recurring framework and be constantly aware of it, but to invent, in the face of every film, a field of ideas that is dissonant to the one already established by the film itself. We must actively search for unexpected approaches, unusual angles, unexplored lines of thought, even if (or especially if) we are in full agreement with the author’s perspective. That is a way to create some cracks in those increasingly thick shields, and to contest those progressively more sophisticated alibis.