The Dhaka International Film Festival is more than just a film event. Those coming here should be ready for an extensive immersion in the everyday life of Bangladesh, which is the most densely populated country in the world. The routine of 22 million people, Dhaka is an indispensable part of the festival, as well as the turbulent history of the country. Without understanding the dramatic past, it’s hard, if not impossible, to appreciate fully the modern concerns and aspirations of local directors and the people that they are telling their stories about. But no concerns if you’re unfamiliar with Bengali culture: Locals are willingly and patiently explaining to foreign guests the nuances, introducing them to Bangladesh out of its rather infamous stereotypical media image of the poor third-world country that is dangerous to visit. However, the festival guests should keep in mind that this part of the world can be very challenging and to stay on alert. The festival provides full safety and security, but by no means can time in Bangladesh be treated as a relaxed vacation. This country is unspoiled by and unused to tourists; during your stay, you can see no foreigners apart from those you’ll meet at the festival. The festival itself is happening despite numerous obstacles and out of a sheer passion for cinema. It has a strong Asian focus and presents an impressive Bangladesh Panorama (of both feature and short films, with the latest being awarded with the cash prize to encourage young filmmakers). The program also includes Women Filmmakers, Spiritual, and World Cinema sections, as well as various training programs, labs, and forums. The Dhaka International Film Festival is a place for people curious about both cinema and the world in its various manifestations. Explorative and open-minded guests will have many opportunities to quench their thirst for fresh impressions and unexpected discoveries. 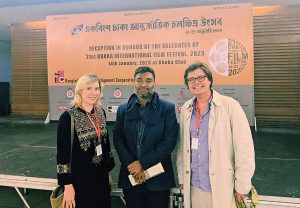 The jury awarded two prizes. One prize went to a feature film Memories of Gloomy Monsoons (Saatao) in the “Bangladesh Panorama” with the following motivation:

“The primary concern of this film is the human relationship with nature and the struggle to survive. A mother’s love for a calf and a farmer’s life struggle against hostile nature, capitalist society, and global implications make this film stand out. Moreover, it convinces with a subtle sound design, complex cinematography, and an outstanding performance by the actors who manage with minimal dialogue and realistic acting to show us a deep and moving local story with a universal appeal”.

Another prize (endowed with money) went to a Bangladeshi Student Film Could You be Free Yet Locked In?

Jurors described the film as follows: “When a woman expresses her willingness to master photography in the evening of her life, the grandson buys her a smartphone and teaches her mobile photography. The film tells the story of the relationship between two generations, the sighs and hopes of the lives that have passed”.