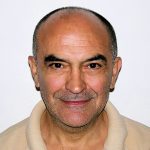 Italian essayist and film critic, has been publishing since 1989 for the Naples “Il Mattino” journal and currently working with “alias” (weekly supplement of daily “il manifesto”) and the online magazine “Filmdoc”. Writer of multiple essays and extended analyses on Franchi and Ingrassia, Douglas Sirk, Carlo Verdone, comedies and understudying. Between 1997 and 2000 he was a member of the selection committee of the Critics’ International Week for the Venice International Film Festival and taught film semiotics at the Fisciano-Salerno University. Captivated by American genre cinema and B series Italian comedy, he has also studied the narrative patterns, style and currents of the Asian cinema (China, Japan, Korea, Iran). His latest works are an updated publication of a 1988 monograph on Clint Eastwood, a book on Paul Schrader, the book “Cinema today: a reflection” and an essay on “Film” of Beckett-Keaton.