The Proxima programme at the Karlovy Vary Film Festival consisted of 12 films, three of which were documentaries, and they turned out to be the most interesting. Either the pandemic has sunk everyone into an abyss of depression and feature films do not attempt to escape it, or the truth of life is more interesting than artifice. Or are the tools of documentary filmmaking so broad that these stories have become so entertaining?

The first of these three documentaries, Another Spring (Ještě jedno jaro), directed by Mladen Kovačević, could be called a medical thriller because it follows all the rules of dramatic structure. Who first brought the smallpox virus to Yugoslavia, how did it happen, with whom did this person have contact in the following two weeks. It is incredible how the authors managed to reconstruct from the archival photos the story of the little-known smallpox outbreak in Yugoslavia in 1972.

It seems that the filmmakers apply just one artistic technique, of a slowed-down camera movement, and this instantly has the striking effect of stopping time. The viewers, like zombies, follow in the filmmakers’ footsteps, staring at the faces of doctors and patients. The tragic peak of the film comes at the moment when people start dying from smallpox, and these are truly terrible images. But then a massive vaccination of the population of Yugoslavia begins, saving the country from a great tragedy. The picture would probably not have looked as exciting had it not been for the Covid-19 pandemic, which just affected all of us and showed us how quickly and globally a virus can spread, as well as the danger of new viruses emerging, such as monkeypox. The film shows that epidemics have always been around on earth and will continue to do so. Man is both weak and strong at the same time. The emergence of an epidemic is always by chance, and the only way to stop the spread is through the combined efforts of people and entire countries. This documentary is a hymn to human solidarity.

The second documentary, Zoo Lock Down, directed by Andreas Horvath, is a “zoo drama” that recounts the pandemic through the eyes of the animals in Salzburg Zoo. The film ends with a long list of characters, including lions and gibbons, flamingos and crocodiles, rhinos and antelopes, in the final credits. All this is serious, listing all the animals by their nicknames, but funnily at the end of the list the names of those working at the zoo are included in the same manner. There is some irony here: the inhabitants of the zoo probably didn’t care much about the pandemic, except that by shutting down the zoo for a long time, the zookeepers shielded the animals from visitors. The filmmakers showed that the animals have a life of their own and how carefully people feed and care for them. The film certainly has its own dramaturgy, but is strongest on the observation and acoustic accents. This world without human voices seems quite natural and it beautiful in its sounds and its fullness!

The third documentary, Art Talent Show (Zkouška umění), directed by Tomáš Bojar and Adéla Komrzý, has also been shot by method of observation. The impression is that the school teachers have known the documentary filmmakers for a long time, so they feel completely at ease in front of the camera, or they have been accompanied by the camera for so long that they are used to it. We school is Prague’s Academy of Fine Arts, which is one of the best art schools in the Czech Republic. However, the film is not so much about the students as about the teachers. They seem to go about ordinary things: reviewing examinations and grading them. But we also see how attentive they are to their students. Then we see them talking, in an unhurried, dignified, sometimes ironic, but more often grave manner. The filmmakers show us three classes: painting, sculpture, and contemporary art. If the first two classes are taught by men, the third is taught by women, and it is they who present the most striking contrast: a chubby, jolly woman dressed in bright colours, and a thin, stern lady in black, who looks as if she had stepped out of a Tim Burton film. 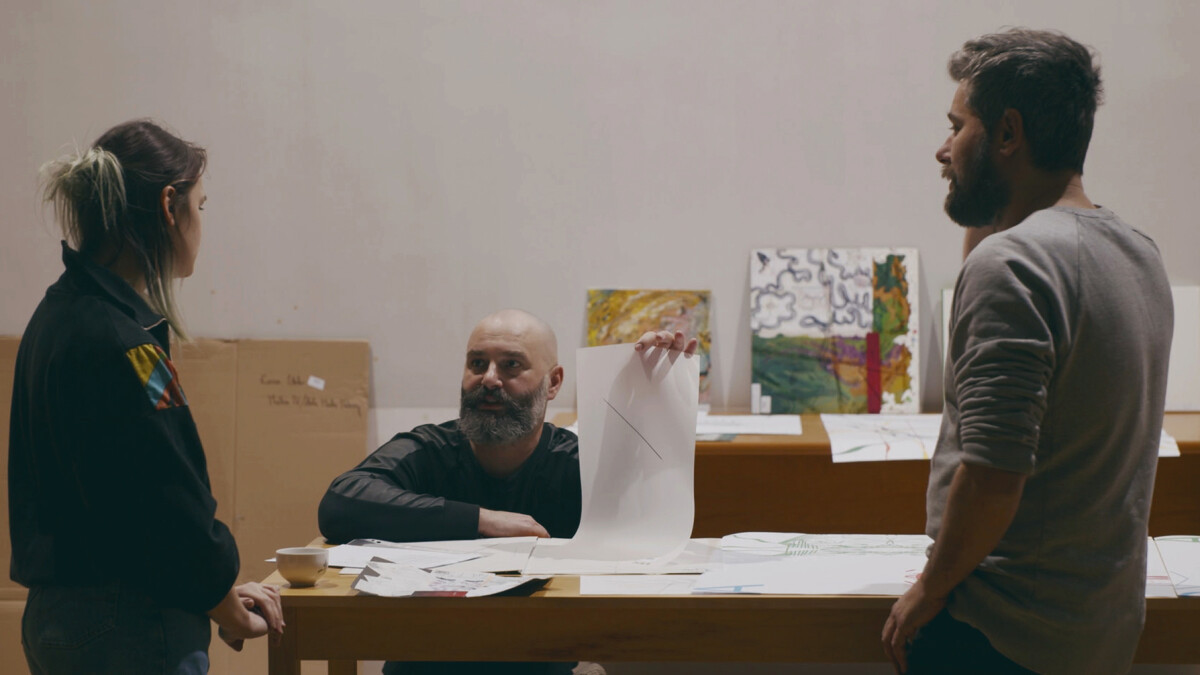 They set quite odd tasks for their assignments, for example, to create an installation “to walk through bushes” without using bushes. In the painting class, the tasks are more traditional, but the work is no less strange. Most importantly, teachers respect the concepts of students, each of whom tries to express themselves in the most distinct way possible. There is also a philistine view on the students, through the gaze of the two watchwomen, who from time to time enjoy discussing the oddities of their students: some are dressed in a provocative way, others are not covering their bodies. Thus life unfolds at this school, where both the students and teachers have a lot of work, a lot of conversations, and, most importantly, a lot of paintings, sculptures, and installations which we, the viewers, look at with interest, which is why the film is called Art Talent Show. Not surprisingly, the film won the Proxima Grand Prix in addition to our FIPRESCI award: it is not just a story about an art school, but a true story about how to learn to be creative. In a remarkable final frame of the film, a trickle of water runs from a sink full of paint, brushes, and some utensils. This shot becomes a kind of metaphor for the birth of art.