Three figures seem to appear out of the dark. They are dressed in sealskins that hang on them like rags; they wear terrible, ghostly masks, and they seem to carry hunting weapons. Their steps are slow and menacing, moving away from the desert tundra and approaching a small town. The first few minutes of Nalajuk Night feel like a horror movie. As viewers, we are prepared to see them as the antagonists of a home invasion thriller set in the cold Canadian North. The following minutes of the short film only partially fulfill this threat. Yes, it is a kind of invasion, and the disturbing figures will enter a home uninvited at some point, but the tone is closer to the bewilderment generated by the eruption of surrealism in the domestic, the intrusion of the fantastic into banal everyday life. 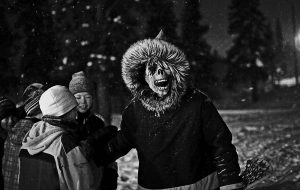 The short film by director and multidisciplinary artist Jennie Williams, made with a seemingly meagre budget, is actually a semi-fictionalized documentary about a tradition carried out year after year in the town of Nunatsiavut, an area claimed by the Inuit, located in Labrador near the border with Québec. Every January the 6th, three men of the village dress up as the Nalajuk, scary figures from the sea, and toy with their fellow villagers. Like the Nordic Krampus, the Nalajuk come to judge who behaved well and who behaved badly. The former are given candy. The latter are punished. It is, in itself, a disciplinary tool for parents. But beyond its possible didactic purpose, it is also a game. One of the director’s great merits is how the tone of this tradition is transferred to the short film itself: a documentary that also works as an amateur horror film. There is an emphasis on the vertigo of laughter caused by fear and the absurd otherness of the situation, but also the playful spirit behind all this. Above all, the film depicts the need to be scared, the pleasure of terror, and the performative interplay between the hunted and the hunter.

Some of the most surprising moments in the short film have to do with the complicity of the town’s inhabitants, their active participation in a tradition that simply seems alien to the outside viewer. One of the best sequences in Nalajuk Night shows the Nalajuks entering a home, going through each of the rooms, while the family who lives there just sits on the couch, absorbed, being watched by the fantastic hunters. In another moment, a child stands in front of the three disguised men and watches them in silence, more curious than terrified. These sequences contain such power that only an attentive eye can find involuntary moments of disturbance. There is something akin to a home movie in the way Williams holds the camera in these instances: the precarious register, the weight and awkwardness of holding a camera… But, at the same time, there is also precision and accuracy in her gaze. She knows what to film and why. As a matter of fact, Williams had already recorded the Inuit tradition in a photographic exhibition entitled “A way of life”, which explains her real knowledge and closeness to what she is narrating.

But while these scenes have more to do with Williams’s anthropological point of view, other remarkable moments seem to be taken out of a grainy black and white B-horror film, one that could have been filmed on VHS decades ago, only to be rediscovered, almost unearthed, in the present day, creating a tense space between documentary and fiction. The Nalajuks’ hunt for a teenager, filmed with a nervous handheld camera, presents us with a tangible threat. The unstable balance between fiction and non-fiction is also the same unstable balance of what is happening in the sequence: is it a farce or is it reality? Once the young man is caught by the Nalajuk, what will happen? Nalajuk Night is a monster film, which records the calm before the possible violence and makes us witness a piece of ancient history come alive in a calm, nondescript Inuit village.