Not Short on Talent: Report from the 2021 Regard

The 2021 Regard Festival international du court métrage au Saguenay had no shortage of Canadian talent. The event devoted to short films featured a hybrid format as Quebec loosened its restrictions on cinemas and live events, offering in-person theatrical screenings June 7 to June 13 with an encore of virtual screenings June 14 to 27. The national competition put Quebecois filmmakers in the spotlight with a refreshing range of new voices working in both documentary and drama. 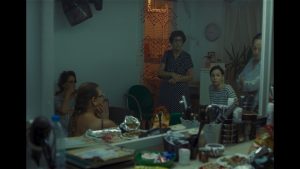 Of the former, Sarra El Abed’s Ain’t No Time for Women (Y’a pas d’heure pour les femmes) offered a refreshing snapshot of a world in transition. The documentary takes audiences inside a Tunisian hair salon in 2019 and observes the hairdressers and customers engaged in fierce debates about the impending election. Women of all generations discuss the progress for women’s rights in Tunisia and the effects of Arab Spring, as their conversations touch upon everything from a woman’s right to (or not to) wear a veil and the disillusionment of young voters who are cynical about the nation’s corrupt politics. El Abed offers an intimate portrait of these spirited conversations and captures much of the dialogue by filming the exchanges through the images reflected in the mirrors of the salon. Ain’t No Time for Women poetically conveys the significance of reflecting women’s stories as it gives voice to the women in the salon and artfully links the personal with the political. Most refreshingly, this portrait, shot in 2019, demonstrates that engaged and respectful discourse is still possible for parties with competing ideologies or worldviews during this new era of divisive and polarised politics. 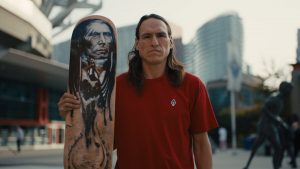 Another strong impression on the documentary front was Joe Buffalo, directed by Amar Chebib. The film is a compelling portrait of Indigenous actor and skateboarder Joe Buffalo (Hello Destroyer, Luk’Luk’I) who commands the screen with a moving account of his experience surviving Canada’s residential school system. Buffalo tells his story in voiceover and recounts the abuse he faced in the school system, which dehumanized Indigenous children to strip them of connections to their culture, language, family, and history. Chebib focuses not on the trauma, but on Buffalo’s story of resilience as the visuals convey how skateboarding afforded an outlet for his pain. Joe Buffalo resonated strongly as it screened mere days after the remains of 215 Indigenous children were discovered by the site of a former residential school in Kamloops, British Columbia, which demonstrated how the fresh scars of this dark period are still being torn open (the last school closed as recently as 1997). Buffalo’s story gives voice to the children who suffered, but also testifies to the spirit of a people who withstood the fire. It’s an excellent character study told with nuance and grace.

A welcome slice of humour amid the weighty national competition, however, came in In the Face of Danger (Le danger en face). Directed with zany verve by Alexis Chartrand, the film is an irreverent story of a barber who devises a violent plan when he fears his family is in danger. Violence begets more violence, as the barber’s plan hilariously spirals out of control. The bodies pile up and there is no happy ending in sight, as he revises his plan again and again to no avail. In the Face of Danger shrewdly plays upon tropes of cartoonish violence by setting the macabre tale in a small town created with paper structures and props, creating a novel suspension of disbelief while evoking the energy of graphic novels. The film has a manic madcap energy that doesn’t let up as Chartrand puts the barber’s fate to the test. He humorously twists the poor man’s fate tighter with each wrong move. The film is black comedy at its finest.

Another significant entry that intuitively played upon elements of genre cinema was Frimas, the latest film from Academy Award nominee Marianne Farley (Marguerite). Frimas is a riveting dystopian drama set in a not too distant future in which abortion becomes illegal once again. The film follows Kara (Karine Gonthier-Hyndman) as she seeks an abortion on the black market. Her fate comes in the form of a refrigerated meat packing truck that ominously drives along the snowy highways while an abortionist performs her duties. Kara grits her teeth while the frozen pigs dangling from the cab’s ceiling bump in time with the cracks in the road, ratcheting the tension as the time passes. Farley envisions a future in which women again are criminalised for demanding agency over their bodies, and Frimas invites comparison to Hulu TV series The Handmaid’s Tale with its suspenseful treatise on a woman’s right to choose. Gripping performances by Gonthier-Hyndman as Kara and Chantal Baril, playing the abortionist who risks everything for the woman in her care, ensure that the film handles this urgent subject matter with empathy and attentiveness.

Women’s stories fuel three other strong entries from the national selection at Saguenay. Miette, directed by Maude Bouchard and Camille Trudel, features a revelatory performance by Noémie O’Farrell. The actress stars as a young woman who participates in a documentary. She shares a harrowing story of abuse in a confessional interview. The dramatic device affords O’Farrell with the use of dynamic monologue that takes the viewer through an impeccable range of emotions. There is ample pain, but the film bridges Miette’s story with the necessary catharsis.

Miette was one of three entries at Saguenay from Montreal’s Colonelle Films, along with two of the festival’s standout selections: Shooting Star (Comme une comète), directed by Ariane Louis-Seize, and Like the Ones I Used to Know (Les grandes claques), directed by Annie St- Pierre. As three of the stronger films in the competition ushering authentic voices behind the camera, the shorts are further proof that Colonelle Films is one of the most exciting up-and-coming production companies in Canada.  These three films demonstrate the exciting possibilities when talented voices get a chance to shine and share their stories on screen.

Shooting Star explores the dynamics of a fractured family as Louis-Seize observes discomfort amid a time of celebration. Restless teen Chloé (Marguerite Bouchard) finds herself attracted to her mother’s boyfriend during a family cottage getaway. Shooting Star invites comparison to Andrea Arnold’s Fish Tank (2009) with its tense observation of the relationship that develops between the young woman and the older man. Told largely through point of view shots that show the world through Chloé’s power for observation, the film unfolds its unconventional coming of age story, as the young woman betrays her mother in order to protect the illicit relationship. 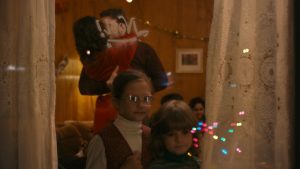 Like the Ones I Used to Know, meanwhile, is a touching portrait of divorce and its effect on the family. The film dexterously explores fractures and family ties as two children await the arrival of their father at their mother’s Christmas party. Unlike Santa Claus, however, their father won’t come bearing gifts. He’ll be taking them away from the party so that they can enjoy the holiday with him. The film sees this event through the eyes of a young Julie (Lilou Roy-Lanouette), who has a remarkable ability to observe the heartbreak that disrupts the festive atmosphere when her younger brother refuses to leave the party with their father. The film shifts perspectives and puts the viewer in the uncomfortable space of Julie’s father (Steve Laplante) who feels his connection to his children slipping away. Like the Ones I Used to Know is a tender coming of age story with extraordinary performances from actors both young and old. Roy-Lanouette especially displays a dramatic force that belies her years as Julie shoulders a responsibility that far too many children bear. The film invites audiences to enter a delicate situation by creating sympathetic portraits of both the parents and the children, and by affording all members of the family equal dramatic weight. Appropriately, Like the Ones I Used to Know stood strong among a crop of Canadian films heralding an exciting new generation of talent at Saguenay.