The Cold Air of Celts 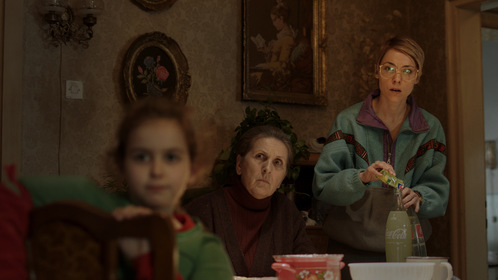 35-year-old debut feature filmmaker Milica Tomović brings Chekhov and Bergman together in one socialist three-room flat in the winter of 1993. A married couple, whose lively feelings have obviously long been resting under the granite slab of their daily routine, are preparing for the eighth birthday of their youngest daughter, and are in conflict with an older daughter who has moved away. A father with a sad mustache collects scarce food around the neighborhood, and has not slept with his wife for a year; for her, this morning begins with masturbation, in order to at least continue to feel like a woman.

By evening, the house is filled with masked children and colorful adults. Somewhere in the big world, Bill Clinton becomes the occupant of the White House, Audrey Hepburn dies, Al Pacino is nominated for an Oscar for the role of a blind colonel in Scent of a Woman, and Belgrade is officially imposed with sanctions, groaning from inflation. And the former Yugoslavia, once the most prosperous socialist country, is gradually turning into a powder magazine in Europe—a European Lebanon, with numerous warring enclaves.

Celts (Kelti, 2021), in spite of the enclosed space, manage not to look like a theatrical piece. Milica Tomović cleverly creates mise-en-scènes, equips her characters with razor-sharp dialogue, skillfully directs children in the frame, and uses humor as a counterpart to despair. But the main thing here is suspense. The screen is bursting with tension. The space of the frame breathes cold air, the chill of the coming catastrophe. The film provides the viewer a God’s eye view: while the characters are fussing, looking for inner freedom, thinking about whether it is possible to combine rebellion with conformism, and making plans for the future, you already know what awaits them in that future. You know, but they don’t yet. And this causes delight and fear at the same time.

Is Kyiv the New Berlin?