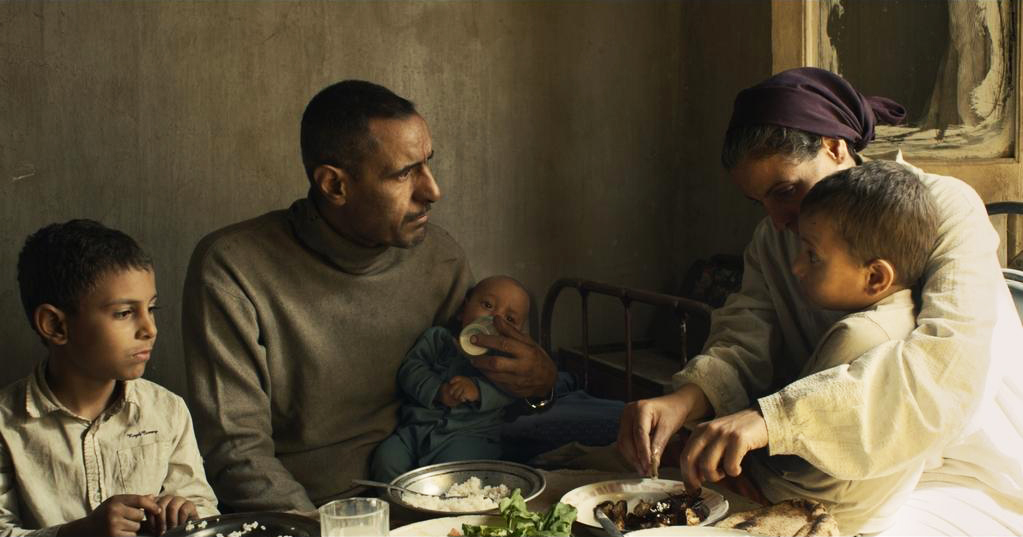 Feathers (2021), directed by Omar El-Zohairy, won the Grand Prize of the International Critics’ Week (La Semaine de la Critique) and the FIPRESCI Award at the 74th Cannes film festival. The film explores the adventures of a mother who is stuck in a repetitive daily routine after a magician mistakenly turns her strict husband into a chicken, as she tries to survive while going through a rough and absurd transformation. According to the storyline, even if you haven’t seen it yet, you are faced with a grotesque film that includes on a combination of surreal and absurd scenes.

The grotesque is a concept and style of art in which the artist tries to induce two inconsistent senses of fear (anxiety or repulsion) and laughter (satire or humor) to another person simultaneously. The grotesque, today, describes and manifests a distressed and alienated world. It means observing our familiar world from a strange perspective that shows off its fearful and ridiculous elements. The most prominent features that make a grotesque work of art range form disharmony, extravagance and exaggeration to abnormality, comedy and dread. All these elements inform the plot structure of Feathers.

Feathers is a film that follows exactly the grotesque path in its narrative and representation. Poverty, as a thematic concept in the script, creates an ambiguity – a funny and scary atmosphere in which it is possible to do anything. Poverty in the location, set design, costume design, etc.  plays a  key role as an active character and becomes the basic element of the grotesque in the film.

On the other hand, the grotesque is a compromise between paradoxes – laughter and what is not aligned with laughter – which ultimately results in a comedy-tragedy situation that also provokes the audiences’ paradoxical response. The unique combination of comedy and tragedy in the storyline and the creation of visual imgages that are relying on its portrayal, lead to impressive scenes in the film, for example, when a child stares at his father’s burnt face and cries loudly.

The director El-Zohairy is an illustrator of a truth that not only lies in the surface layers of the upside-down, contradictory, deceptive and wandering world, but also has been forgotten for the sake of the cyclical repetition of everyday life. These two aspects of the world – a deceptive appearance and a full-of-truth reality – create a contradiction, whose purpose cannot be described with humor. In this regard, the mysterious world of the grotesque is the only means helping us unravel its mystery. Humor is present in most of the scenes in Feathers. In some, the humor is accompanied by the structure and the elements that assimilate it to the concept of the grotesque. They are no longer intended to make the audience laugh and, instead, are a bittersweet case of occurrence.

It can be said that one constant feature of grotesque cinema is that it functions as a point of coalescence of life’s contradictions. This style incongruously mixes the beautiful with the cruel, calling into question what is considered a reliable reality. This joining of contradictory concepts encourages a fragmented world view which normalizes the horrifying and the ludicrous in place of what is socially accepted. Feathers tries to normalize the unusual so that we realize that in today’s strange world we may, for no apparent reason, accept anything as the truth.

In the end, it should be noted that one of the key features of grotesque cinema is its comedic styling. This dramatic form is often described as a tragic farce as it uses comedy, specifically physical comedy and irony, to frame its existential questioning. The incongruous nature of this style is absurd and disorienting, and so it often appears that laughter seems the only rational response. This humor is appealing to audiences of  Feathers as it provides a catharsis which liberates audiences from the fear, discomfort, and bewilderment that is experienced in response to the disorienting nature of the content.

Feathers with its unique idea, amazing direction, brilliant acting, eye-catching cinematography and rhythmic editing, can be seen as an imminent entry to the history of grotesque cinema.