Some Ethical Dilemmas in Documentaries

The selection of 12 debut feature films that the Fipresci jury was watching at the 2021 International Documentary Film Festival Amsterdam (IDFA) were scattered along three different programs: most of them, five, were part of the premiere-only Luminous Section, three were in the ‘innovation’ based Envision Competition and even four were from the main, International Competition. Our jury chose to award the Iranian film Makeup Artist (2021) by Jafar Najafi, which \was in the Luminous Section, with the following explanation: “It is a convincing and captivating portrayal of a theatre called marriage. Following a couple through a heavy emotional journey, we stay deeply connected with them. In utter sincerity of both positive and negative aspects of human nature, the film transcends its local context and becomes a universal story of relationship dynamics. We are faced with a world full of humor and hardship, but foremost people who break stereotypes on whom they should be and that compromises are not possible”. 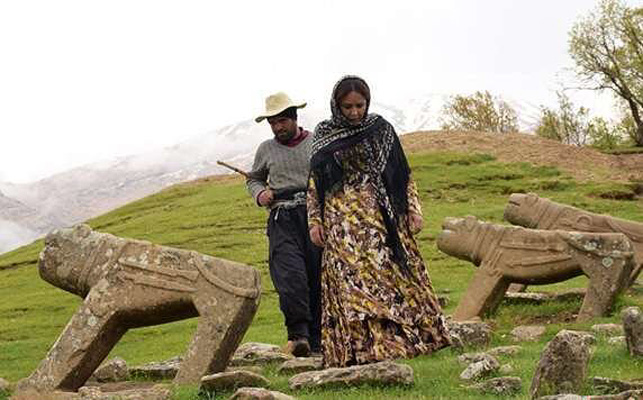 In regards to our choice, what was particularly interesting in the entire first feature competition selection were the diverse approaches and attitudes that the filmmakers took when dealing with their characters and subjects. Indeed, when talking to the awarded filmmaker Jafar Najafi after the award ceremony, he revealed that the shepherd Mohammed, whose relationship the film was portraying, was his relative. This had put the director in a more comfortable position, needing less time and effort to acquire the trust of the people he was filming, particularly Mohammed himself, whose marriage and wife Mina were on line as the main dramatic element and character of the film. Mina, ‘the makeup artist’, seemed more than willing to present her personal case to the camera. The film very much drew us into the couples’ intimacy, so much that it almost felt as we are not supposed to be there: as if the two people deserved to settle their problems without a the third party. The director tried to keep it observational, but especially due to their familiar relationship, the crew was constantly being drawn into the drama by their characters. Nevertheless, in this case, the marriage is an unavoidable thing of the community, as friends and relatives are involved to help out with the case, and luckily, we get to watch it. We are presented an un-stereotypical show of a relationship in a different environment to that of the western societies, especially ones put forward by the media, particularly in films. The ‘rules of the game’ and some situations occasionally even seem bizarre, but also quite recognizable, as we watch two people struggle, each pulling to their own side, yet again with traces of tenderness, respect, humor and also practical thinking. It almost makes me want to declare it a feel-good film on a difficult subject of a break-up, especially with a small child involved. However, So I will not do that.

In the respect to our awarded film and the topic of ethics in documentary filmmaking, I will shortly mention three more films from our program that offered quite different dilemmas. Alongside the veteran filmmaker Sergei Losnitza, who scooped up the Best Film Award, two of the debut features were surprisingly awarded in the International competition. Undoubtedly a very well-directed debut, the Vietnamese Children of the Mist (Những đứa trẻ trong sương) won the prize for best directing and the Russian Where Are We Headed for best cinematography. Also, the Best first feature jury, who had the same selection as Fipresci, gave the main award to Where Are We Headed and a special mention to Children of the Mist. So, with two awards each, these two films eclipsed the entire first feature competition.

What was ethically dubious in Children of the Mist was the intensely close relationship of the director Diem Ha Le to her cinematic heroine Di. Not only did the filmmaker, who tried to keep an observational distance most of the time, got physically involved in one scene. Diem also stated that she considered her main character a very close friend, and, what is felt from her presentation of the film and in the film itself, her protector. And this, after not knowing the language of the people she was filming, only to then discover the whole context of the situation when editing the finally translated into 100 hours of material, as she admitted. This makes her approach quite peculiar. Just to be clear, this is not a judgmental stance, but an interesting question of the ethics of documentary filmmaking. But an opinion that I will make, especially after paying attention to the IDFA audience response at the Q&A, is that, obviously, everybody knows what’s best for Di, from her family and society shown in the film, to the director and caring audience who didn’t not approve her choice of rejecting a very good scholarship and marrying and having a child at a young age instead.

Another question, an ethical question, which is perhaps clearer, is put forward by the film Where Are We Headed, which owes its particularity more to the editing concept than the cinematography that it was awarded for. Director, editor and cinematographer Ruslan Fedotow had almost entirely filmed it with a hidden camera, which makes it a voyeuristic film, especially as it was insisting on peoples’ bizarre behaviors in public spaces and quite a number of close-up shots. It is conceptually interesting, voicing a specific outlook on a certain society presented in the scenes. Yet, it is not a courageous film, as it doesn’t deal with the world within, nor does it have the common decency to approach people in a physical way, but uses their images and acts as extras and edited dramas for a cinematic play.

The last film in this critical play is, beyond doubt, the crown jewel of the program’s ethical wonderings, the quite incredible (and I don’t mean it in a good way) Dutch-Croatian coproduction Darkness There and Nothing More by Tea Tupajić. Not only does the theatre-filmmaker appropriate for herself a self-righteous victimizing role, and plays it badly, but everything about the film, from its setup to the end scene seems fake and wrong on the directors’ side. The only good thing about this darkness is that it works as such a stereotypical narrative that it makes a sensitive viewer nauseous. And by sensitive, I mean a viewer that does not fall for cheap thematic exploitation. Tupajić theatrically reproduces the same war story that festivals are willing to give their eyes and ears to, more so that it seems it has become the only kind of story there is to know. But in this case, it is not a fictional exploitation of the self-victimization narrative, but a more serious documentary one, which in itself is not able to achieve anything. Not even a millimeter of sincere human interaction is crossed from the start to the end scene, as no real interest is shown in the invited men, nor is it an honest show of emotional depth or research of a complex topic achieved. The film is in every way short-termed, from the length of the encounters to its final outcome, remaining a cold and autistic ‘concept’. Yet, the title is quite fitting, as from the moment you sit in the cinema to watch it, there is the initial darkness when the lights get turned off, and then nothing more until they are back on.