The multi-sensory media experience that is called Symbiosis was a new kind of experience for Steffen Moestrup. Here he talks to Marcel van Brakel, the creator of the project, and extrapolates the intentions of the device being an addition to the human experience rather than an alternative one. 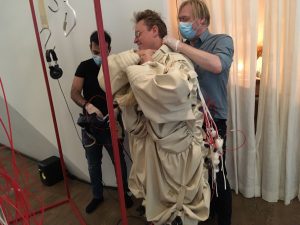 Two people dress me up in Amsterdam. They’re putting me into something reminiscent of an astronaut suit. Connected to the suit is a tangle of plastic wires, small containers with scents and inflatable holsters. My hands get attached in front of my chest and I get the VR headset down over my face. I am now inside the virtual world. A peculiar creature looks at me. It looks like a strange combination of a toad, a lizard and a human. Soon, a larger herd of these creatures are surrounding me. They are both alluring and disgusting at the same time. Suddenly a virtual human figure reaches out to me with a hand. In a split second, the virtual world meets the real one, as I am served a mouthful of real food on a spoon, a mouthful of food created by a chef from a one-star Michelin restaurant out here in the physical world.

I’m in Amsterdam but right now I’ve been inside an installation – or whatever you want to call it; it is as if the right words are difficult to find. It is called Symbiosis and it is a multi-sensory media experience that thematizes our cohesion with nature. The multi-sensory experience requires a clumsy suit and a lot of equipment, but in fact it is also all that gear that makes me never completely forget myself. I never turn into a toad but am always aware that I am still a human being standing in a room in Amsterdam. And that is precisely a relevant point when we talk about virtual reality productions, says Marcel van Brakel, who is one of the creators behind Symbiosis: “We are not trying to reproduce reality but to expand it by bringing the user into another body and thus removing the human-centric perspective that is almost always our fundament in media experiences. At the same time, the user should not lose himself. This is not escapism, and there is something effective in the dialectic between both being oneself and being another at the same time,” Marcel concludes. 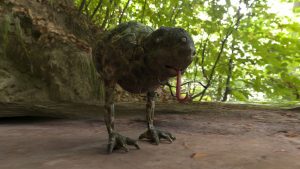 Symbiosis is at once theater, film and computer games, and also a deeply interesting way of rethinking these media and ways of expression. All in all, the DocLab part of the documentary film festival IDFA in Amsterdam is the place to be if you want to orientate yourself in the world of new media – and the fusion of old media. It seemed sensible to ask Marcel van Brakel what he thinks these technologies such as a haptic suit can do in terms of creatively treating reality, so that’s exactly what I did:

What do you think technologies such as the haptic suit can do in terms of a creative treatment of reality?

A lot of virtual reality films and media products are very focused on the brain. You get the VR head set on and everything is pretty disconnected from the rest of your body. VR often becomes this very brainy experience. With Symbiosis and by for instance using the haptic suit we wanted to bring more emphasis on the body. The idea is to put the body in a different position and allow for a different perspective.

Is the ambition of Symbiosis then to mimic reality in the best possible way by, for instance, using touch, smell and taste?
No, we are rather trying to add another layer to reality. It’s not about mimicking. We are not toads and can never be one. Instead what we do is try to lure the user into rethinking what a human is and how different perspectives can perhaps let us reconsider our relationship to the environment, the plants and the species.

For some years now, we have talked about virtual reality and other technologies as a possible way to enrich, for instance documentary film, but we have also said that the technology is not completely there yet, that we still have some way to go before we can really use the potential of the technology. Do you also feel these technologies are still in their infancy?
Yes, for sure. There are different systems to create haptic feedback and we have just chosen to use the inflatable devices. From the outside our set-up seems very traditional, hard and a bit like a cyborg but inside the suit it’s much more soft and feminine. I like this contrast. I believe the future technologies will be more feminine in their nature, more biological.

What do you find most fascinating about working with these different technologies when building a story?

As a storyteller and a theatre director, the most important aspect for me is to give agency to the audience, to allow them to be there and be in position but also to have themselves inside these pieces. For instance, I have never been in a war so I can never know the true experience of war if I see it on film or in a virtual reality piece. But perhaps I have experienced a violent episode in my childhood and then I can put this into the piece and my interpretation of the piece. It will always be a dialogue between the user and the piece. This is also what we aim for in Symbiosis. Not to get the user to become the toad but to use this as a mirror with which you can look at yourself in new ways.

Some Ethical Dilemmas in Documentaries