Pebbles. A film that was part of the International Competition in the festival’s 26th edition particularly won the appraisal of Ashok Rane. Here he looks at the intricate details of the narrative to underline a father and son relationship in the most oppressive of circumstances. 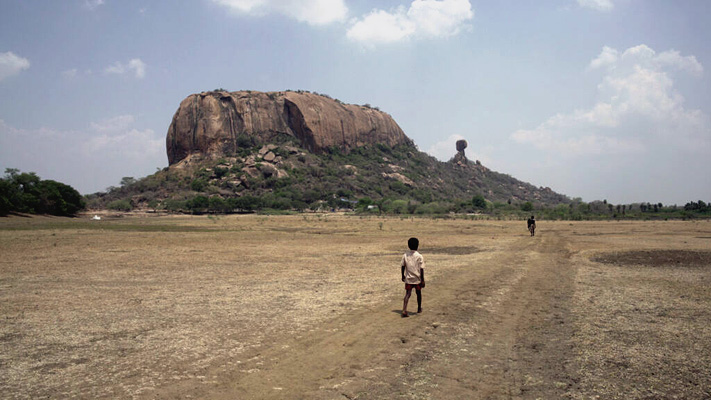 A man is walking. The way he is walking one can easily make out that he is on the lookout for something. He is kind of desperate. He is in a terrible hurry. The pace of his walking clearly shows that. He suddenly stops. He looks around. We see the faces of children sitting in a classroom of a primary school. They too are looking at him. They are quite surprised with the arrival of the stranger. He moves to next classroom. Somebody, probably one of the teaching staff, scolds him for his entering school in a rowdy, aggressive manner. He doesn’t bother to take note of it. He looks around. Again, we see the faces of children. The camera pans left to right. One boy gets up dutifully, out of fear and of course with no respect of any kind. He picks up his school bag and leaves the class. The man starts walking without making sure whether the boy will follow him. The boy follows. Both are walking. On the way, the man suddenly stops and asks the boy,

The man turns and starts walking. The boy follows. They halt at a petty shop which is on the outskirts of the village. The man enquires whether the bus left. The shopkeeper replies the bus is expected any time. The man buys a bottle of country liquor, goes behind the shop and drinks half of it in one go. With the second round he finishes the stuff and throws the bottle away. He now comes in the front of the shop and buys a bidi bundle and starts smoking. The boy standing away from him observes him quietly. The man now orders him to leave his school bag at the shop and tells him that he would collect it when he would return. The boy reluctantly keeps the bag at the shop. The boy constantly looks at him wondering what he is in his mind. The man occasionally looks at the boy. There is burning anger in his eyes. The boy now goes back to the place where he has kept his bag and looks in it for something. The man rudely asks him what he is up to. The boy answers, that he has something for his younger sister. The bus arrives. Both of them get in. They sit next to each other. The boy sits in the window seat. After a while the boy gets up and sits in the window seat on the opposite side with a view, to keep himself away from the man.

The long journey, it’s not just one way but both, begins. The journey is taken up by the man to bring back his wife from her parents’ home in another village. In this task he requires the help of his son and hence the boy has to accompany him. The little boy does not have choice. Everyone in the family has to follow the orders of the man of the house, the father, the husband. He is the boss. This can be seen easily from the man’s behavior, his attitude, his body language and so on.

This is the opening sequence of the film, Pebbles (Koozhangal) by the debutant filmmaker P. S. Vinothraj. The film is based in the arid landscape of Tamilnadu, one of the states of south India. It’s in Tamil, the language of the state. Before I move further with my observations and analysis I would like to say that this is one of the best films of the genre called ‘Road Movie’. What a journey! At times, one gets a feeling that this is a sort of never ending journey.  Normally it is observed that the journey in road movies is often one way. Pebbles is an exception, an excellent exception and a brilliant example of a remarkable cinematic expression. It is the best work in terms of storytelling, treatment, use of environment and above all masterly control over the language of cinema. The character walks and walks and walks and most of the time not much action takes place – there was a danger of turning the whole experience monotonous and hence it was a huge challenge and the maker has to have the guts to do it. P.S. Vinothraj has the guts. Hats off to him! One more observation I would like to make is that the content of the story has a huge actual time span which is conveyed through the short duration, using the exact cinematic time and yet it attains the powerful effect of the long journey that the protagonist embarks on. The duration of the film is 74 minutes. This is something remarkable.

Through these two characters, the alcoholic Ganapathy and his son Velu, we get a sense of the emptiness of a drought-hit region. As they walk almost non-stop we see different places and faces. These may just pass but they also add something very significant to the story and it’s narrative by bringing dramatic devices subtly to prove the theory that ‘a small detail matters a lot or makes big difference’. There is a beautiful scene in which Velu finds a piece of mirror. He enjoys playing with the moving reflection on the rocks on the both sides of the road and then slowly brings it on the back of his father. The father tries to scratch his back in order to remove something that he thinks he has stuck to his back. At one point he turns back suddenly and goes to Velu, snatches the piece of mirror from him and throws it away. The little amusement that Velu was enjoying is gone. This is an excellent observation on the part of the filmmaker how he looks at his characters minutely on a micro level and finds such nuances of their characteristics that add some lighter moments to the narrative. Besides, no matter whatever is the difficult situation, people can still find some kind of amusement and entertainment sometimes, somewhere to ease out the tension and trouble they go through constantly.

On their way we see the duty-bound women doing household chores, while the absence of men is noticeably felt. The men are either playing cards, drinking or chit-chatting, or taking a nap. This shows that women are always at work as they have to take the responsibility of the family single handedly. They have to manage to feed their kids. We see the tribal women working hard to catch mice skillfully. That’s their food. This mission of hunting mice has to be taken up in the scorching heat of a sunny afternoon when mice are underground keeping themselves away from the heat outside. The hunting women burn dry grass and put it inside the hole from one end and wait at the other end to catch mice as they come out because of suffocation. For this, the kind of patience they require is absolutely unimaginable.

A couple sees Velu walking and offers him a lift on their scooter. Ganapathy doesn’t say anything. Taking this as his permission the couple gives Velu the lift and even Velu accepts the same. Ganapathy continues walking alone. He gets hurt and his toe starts bleeding. Nevertheless Ganapathy keeps walking, though with a slight limp. Later he finds Velu waiting for him. He instantly starts beating and abusing the child ruthlessly for enjoying the comfort of travelling on a vehicle. The journey continues. Velu now picks up a pebble from the street and puts it in his mouth. This has been the practice for a long time. Since there has been severe scarcity of water travelers put a pebble in their mouth. By doing so the mouth becomes watery and that helps to overcome thirst of water. This further underlines the ruthless nature of the land, devoid of even a drop of water.

Through the eyes of the father and son, we get an unflinching look at life in a drought-hit region. Even the last scene of the film emphasizes the extreme scarcity of water quite shockingly and scarily. An old woman is trying to fill her plastic pitcher from a small pond which hardly has sufficient water, while other women are seen sitting at a distance waiting patiently and helplessly for their turns. It would take a long time to fill the vessel and one is not sure whether there will be any water left for them when their turn comes. The real time for fetching water with a small mug and filling the vessel could be terribly boring but the way the maker treats the scene, depicting the harsh reality where the very survival is at stake and the suffering of the people that shatters the very sensitivity of the audience. It doesn’t merely remain the repeated mechanical action but depicts the gravity of the situation in which people ‘just live’ without any hope.

Ganapathy is aggressive, violent and sort of desperate. He is full of anger. He is not a bit kind to his son. He is ruthless. He is an alcoholic. He beats his wife. He is not carrying out his responsibility as the man of the house. Considering all these factors one could easily end up describing him as ‘a good for nothing fellow ‘. Instead, one concludes with the realization that he is the by-product of the circumstances he is in. One cannot deny the fact that he is solely responsible for the suffering of his family and at the same time one realizes that he himself is a captive of the situation he is in. Throughout the journey the way Velu looks at him shows his curiosity about the behavior of his father. The little boy, curious as he is (which is very subtly brought out during the journey), while still hating his father for his ruthlessness, knowingly and unknowingly is trying to read his father’s mind as well.

There are many scenes, instances in the film that could be discussed in detail to appreciate the kind of masterly control over the language of cinema the director has. He doesn’t ‘tell’ the story, rather he ‘shows’ the things and in the process the story unfolds. This clearly explains that the filmmaker knows how to tell a story cinematically. This is undoubtedly purist cinematic expression in every respect. It is quite astonishing considering it is a debut film and hence P.S. Vinothraj deserves kudos for his achievement. He is brilliantly supported by his team members who are masters in their own right; the director of photography Vignesh Kumulai and Parthi Che, the editor Ganesh Siva, sound designer Hari Prasad M.A., music composer Yuvan Shankar Raja and the main actors, Chellapandi V and Karuththadaiyaan K.

Pebbles, produced by Nayanthara K and Vignesh Shivan, and written and directed by P. S. Vinothraj, is undoubtedly the best example of the perfect cinema.