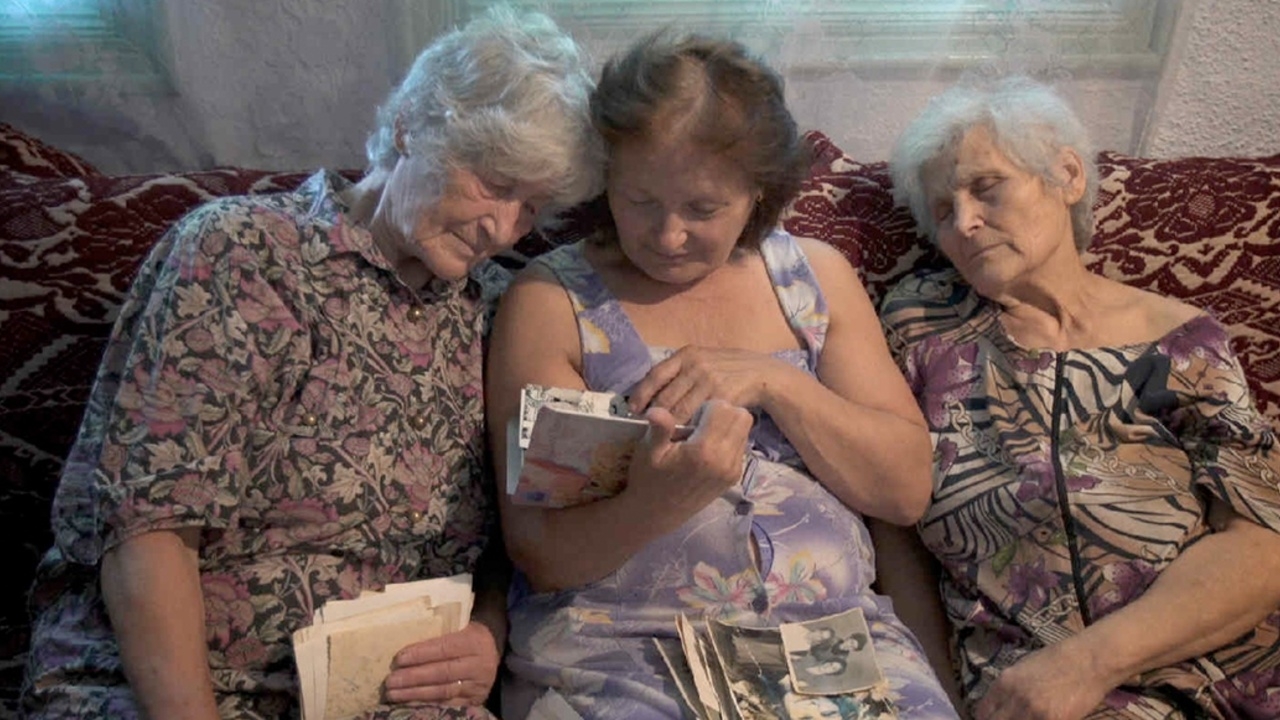 We are immediately immersed in an idyllic atmosphere in the countryside of Moldova.

The green is lush, and the grass is high; the birds are singing, the chickens are freely engorging themselves in the garden of a humble cottage. It seems that we are in the middle of a mild summer; while the sunbeams are filtered through the verdant branches, the net curtains are elegantly dancing in the refreshing breeze.

An old and potbellied man is peacefully resting inside the kitschy house, while outside, a lady is pitting sour cherries, surely to make the traditional liquor. She is the director’s mother, and she is so happy to be back to her childhood ambiance shared with her own mother and sisters.

She is trying to link with the happy past using black and white photographs, but it seems that the filmmaker Olga Lucovnicova has some problems with her memories in the same old cottage.

We start to listen to a conversation between Olga and the old uncle Tudor. She asks him what he remembers of the past and shifts quickly to personal questions like: “How was I? Don’t you remember?”

He seems reluctant to speak out because he is surely aware of where the conversation is leading.

In the meantime, the camera closely follows a very hairy caterpillar advancing slowly on a colorful fabric inside the house. The macro shooting hypnotizes us while the tone of the voice-over dialogue becomes rougher; Uncle Tudor: “There are forgivable and unforgivable sins…”

Olga comes to the point: “I can’t forgive you!”

The Christian streak of his ideology pushes him towards defensive and even aggressive statements: “Then you’ll get even more sins and nobody will forgive you!” Olga is completely aware that what was done to herself by uncle Tudor is an absolutely unforgivable sin.

In the meantime, the macro lens travelling through the house goes on exploring the details attentively and now we run into a spider…

That I played with you? That I hugged you?”

Olga reminds him that he undressed her completely, and he himself got naked. But everything she says becomes a reason for uncle Tudor to defend himself by insisting that he did not penetrate her.

For the time being, we leave the escalating tension of the apparently soft-toned but yet difficult conversation, and we hear the whispers of the aunt praying devoutly in another room on one of the many vividly coloured kilims.

Religion is for sure the constantly comforting harbor of the whole family, and the assumption of forgiveness about any kind of sin is prevalent.

Olga goes on with more disturbing memories, and in the meantime, the camera focuses on the spider that captures and wraps one of its preys…

Tudor thinks that he always behaved nicely with her: “I never raped you!”

Olga replies: “I was 9 years old!” At the end, he accepts that he did something not so good: “Well, whatever…to whom it doesn’t happen?”

After conveying the ugliness of her childhood experience masterfully, the director Olga Lucovnicova loads the spectator with a deep feeling of disgust and at the same time with frustrating outrage.

The question of child abuse amplified with incestuous dynamics has deeply affected her whole existence. Still, her uncle’s barefaced and stolid behavior is unbearable, especially when he takes shelter in a religious shield.

The case feels even more disgusting because we understand that probably Olga’s aunt was also aware of what was happening but could not speak up in a conservative patriarchal family and society.

The skillful director leaves us with a traditional chant sung by the women of the cottage; yet again, we do not see them singing and go on with the very aesthetic visual visit of the signs left from a happy/gloomy past in the country house. We feel the same duality in their chanting and a kind of submissiveness imposed by the ancestral way of life.

Olga apparently has overcome the code of silence, but as she informs us at the very end, 1 of 5 children are abused before the age of 18; 90% know their perpetrators; 70% of children don’t talk about the abuse; some, like herself, disclose in adulthood but 40% never talk about it and live with their trauma for life.

My Uncle Tudor (2020) effectively conveys its message in merely 20 minutes and becomes a very sharp cinematic ambassador of the issue that remains a taboo even in our era.