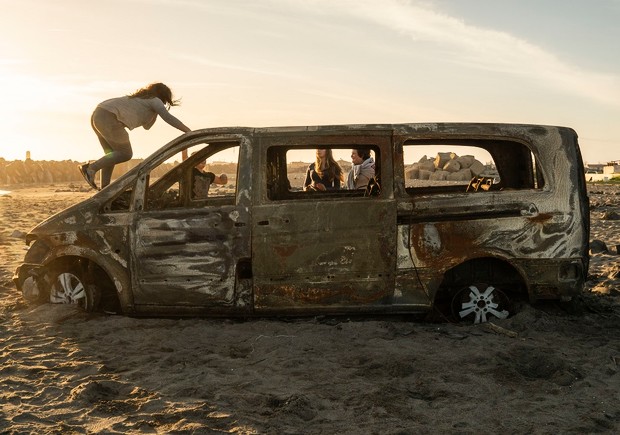 Where the Tiber river meets the south sea, a small community has settled on the edge of Rome. Called Punta Sacra, or the sacred point, this makeshift town of nearly 500 families is threatened by weather and bureaucracy. Every year, the sea rises and every year, the government tears down more homes. Established during the 1960s, the community finds themselves pushed off their land, forced to resettle elsewhere.

Punta Sacra (2020), directed by Francesca Mazzoleni, is one of many films in the ZagrebDox regional competition to challenge and explore borders. Punta Sacra exposes an ongoing crisis as liveable space on earth shrinks through its intimate and lyrical style. It is a film as much about land as it is about people and communities.

Much of the film seems to be shot during twilight or overcast days where time loses all meaning. In shades of stony blues, the light appears to suggest a space between waking and dreaming life. This world and the people who inhabit it exists on the peripheries, faced with shrinking possibilities. As the sun sets on this small corner of Italy, darkness robs people of their light. When the cameras leave, the memories and emotions of this space will shatter – spread out as residents are displaced and pushed out.

What relationship do we have to the land we live on? In Punta Sacra, there’s no doubt that its residents, particularly its matriarchs, care for it deeply. They fight against its destruction and fight for greater access to resources, like a pharmacy, to ensure the health and safety of their community. They care for their homes, and they sing to the earth. The greying collapse of the buildings pales in comparison to their strength. Yet, even the earth’s most powerful mothers cannot overcome the impending climate collapse. If they can fight the government, they can’t fight the rising sea.

In painting, blue is an unnatural colour. For much of history, blue was reserved for nobility and the sacred until the invention of synthetic paints. As children, we imagine the sky and the sea as blue, azure and navy, a welcoming and unnatural abyss but the actual color of water and sky has infinite possibilities. Still, there’s something powerful in blue’s overwhelming power over our waking lives. Its presence in Punta Sacra highlights how the elements are infringing upon the earth. It highlights that the limited landscapes we have to live on are being colonized by the greed and power of industry. The climate crisis exposes more profound inequalities and injustices.

Rather than take a polemic stance, however, Mazzoleni allows people to speak for themselves. We listen in on conversations and struggles. We watch as people debate Pasolini and rappers discuss their music careers. The future isn’t some big question; it’s embedded into their lives. Their imaginations are not yet destroyed. Their capacity for transformation is still a possibility. Drawn into the melancholia of the landscape is a deep sense of yearning, an idea that through solidarity, hope might emerge.

What does the future look like? In many ways, we are living it. From the moment we are born, we live in our parent’s future, ready to live unimaginable lives. On a grander scale, the future exists in cycles and prognostics. Scientists predict that as the world continues to warm, the earth will become increasingly uninhabitable. Greedy opportunists in politics and business will seize the opportunity to enrichen themselves. The rest of us will be left to fight for scraps of land, even more, of us forced to migrate into unfamiliar and increasingly unwelcome territories.

The lyricism of Punta Sacra, underscores the horror of what it represents. In conjunction with a film like The Wire (2021), the winner of the FIPRESCI prize for the section, it exposes how tightly wound our bonds to each other are, ready to snap. Both films similarly tell a need to control or conquer not only lands but people.