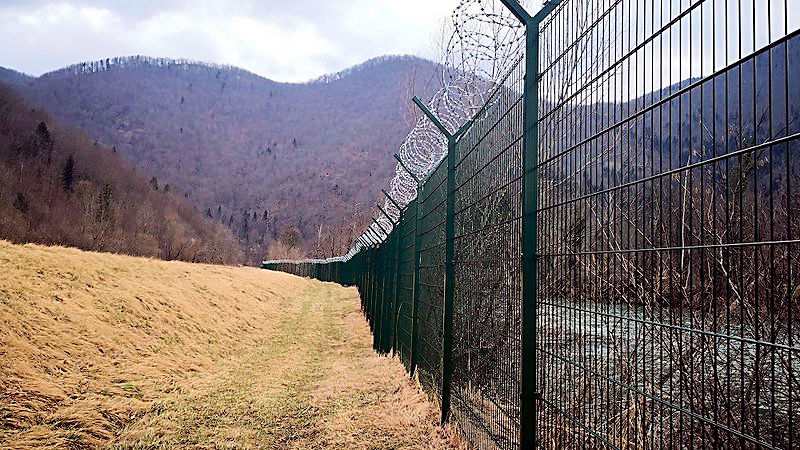 The Wire (2021) is rooted in the tale of a fence: A fence of the spooky kind equipped with barbed wire and dangerous barbs; A fence put up in the border region between Croatia and Slovenia; A fence both specifically and metaphorically dividing the waters near the river Kupa in the idyllic region bearing the same name as the river. In the region, many of the locals live a life based on tourism income and are certainly not interested in having the ugly fence placed in the landscape. In the film, we follow their resistance but the director – the talented Tiha K. Gudac – also expands the collective of characters to include all kinds of people that somehow relate to the fence.

We meet the angry opponents who desperately try to reach out to the politicians and the local police. They try to argue that jobs are endangered because tourists do not want to visit a landscape injured by an unappealing fence. Furthermore, they emphasize that the fence does not function when it comes to keeping out illegal immigrants anyway. On the other side of the spectrum, we find the people devoted to the idea of the fence and resistant towards immigration. A man is tired of having his boat stolen repeatedly by immigrants crossing the river. A family devotes its spare time to hunt down illegal immigrants, call the police or even retain them themselves. In a striking scene, we see the family carry out one of these manhunts. The teenage daughter is holding up the barbed wire with a large stick while her mum and dad crawl underneath the wire to get to an abandoned house on the other side to investigate whether some immigrants may have taken residence there. Damn – no luck this time!

The immigrants also play an important role in the film – and here, the filmmaker has made an excellent aesthetic choice. In the first two-thirds of the film, the immigrants are only present as voices we hear off-screen. We listen to their stories and get a sensation of their tragic destinies. We hear about their encounters with the fence. And their encounters with the police often include interrogation, being beaten up, even tortured. All these voices are heard while the camera shows us the forest, the river and the fence where no people are seen. This polyphony of voices makes the immigrants seem like an anonymous mass. They are not individuals but a phenomenon, something to be dealt with. Only towards the last third of the film do the immigrants appear with bodies and faces. Only then do they become human. And there is a strong point in that. For as long as we do not see immigrants as human beings but merely as a mass, as a phenomenon, we can more easily disregard our human conscience and fail to take a stand. Fail to show empathy. As soon as they appear in their entirety, we must take a stand. Then it becomes difficult not to be human towards immigrants and refugees. And just at that point in the film, another character is added to the ensemble, namely, a tireless Croatian woman who has chosen to spend all her time helping the illegals obtain clothing and food.

The Wire is a well-produced film that is cleverly constructed so that the viewer is gradually immersed in the complex theme. It is a film that receives much of its appeal and strength due to the focus on one specific location, which is used to reflect and explore the highly complicated topic of the global refugee crisis.