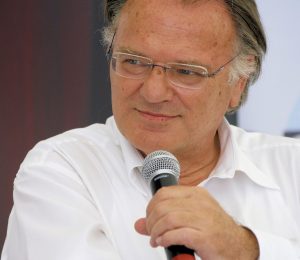 Klaus Eder. Born 1939 in the German city of Augsburg. From 1959 Studies of German literature at Stuttgart university. 1966-1968 editor of the monthly film magazine film. From 1968 film critic of the national public radio Bayerischer Rundfunk. Books, among others, on Andrzej Wajda, Luis Bunuel, on Nikita Mikhalkov and Andrei Konchalovski, Arturo Ripstein, Im Kwon-taek, Nagisa Oshima; co-author of a History of Bulgarian Cinema. Curator of a series of 30 films of the German 50s After the War, Before the Wall at the New York Film Society of Lincoln Center (2002). Curator of a series of films by German director Helmut Käutner, accompanied by a book published by the Goethe Institute (2007). 1986 – 2007 programmer of the Munich International Film Festival. Adviser for a variety of festivals. Member of international juries in many festivals (among them Venice, Montreal, Istanbul, Moscow, Karlovy Vary, Odessa, Jerusalem, Bari). General Secretary of the International Federation of Film Critics (FIPRESCI) from 1987. Lives and works in Munich, Germany.