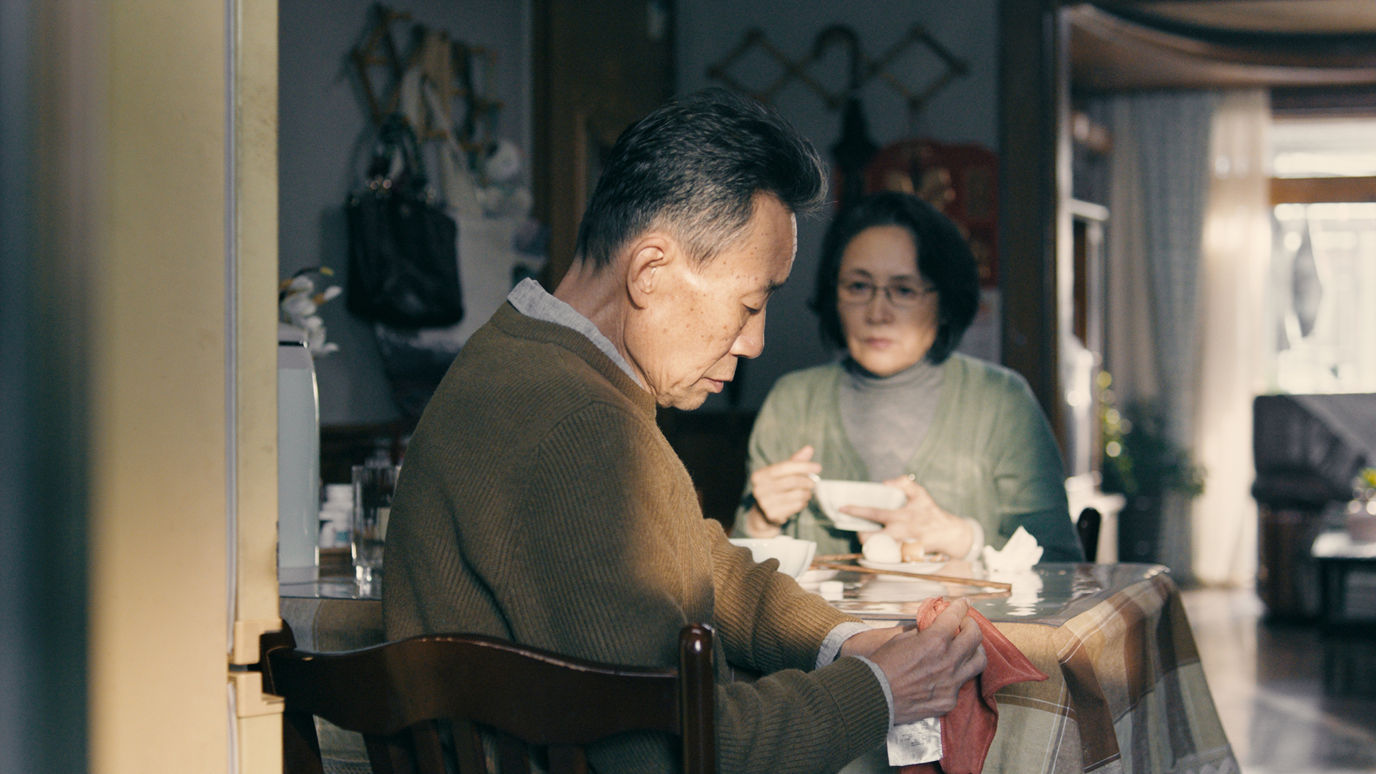 The debut feature by the recently 31-year-old Chinese filmmaker Gao Linyang is captivating and evokes admiration for its cinematographic mastery and its storytelling. The film tells in balanced shots, with carefully chosen camera angles and framing, the everyday life of an elderly couple, retirees, in Xian, Central China. This framing is important because a large part of the shots are in the small apartment of husband Li (Li Xuejian) and wife Nie (Song Xiaoying). It’s about the little things every day. Li rummages around in the kitchen, the freezer is about to give out. Ni hosts the local dance festivity for the elderly in a courtyard. A solution must be found for neighbours who complain about noise pollution. The atmosphere is that of a documentary in which much can be seen of daily life in a Chinese city in the twenties of the 21st century. There isn’t much talking exchanged between Li and Nie. Li is a man of few words and Nie – a strong woman who speaks when necessary. Both characters and their environment are portrayed visually and precisely.

Mr. Li is informed that the burial rights of his ex wife’s urn will soon expire. He is to decide whether she should be culled or reburied. Li comes into the house next to Nie casually with the proposal that if the time comes, they could take a joint urn, for them – Li and Nie – along with their deceased ex partners. In other words, an urn for four people. Nie has to get used to the idea, but says nothing. The dilemma plays out very briefly on her face. Does Li observe it? We do not know. He seems to look away. Good actors, good directing, well-considered screenplay, but this is just the beginning. The troubles surrounding the freezer that is now really giving up the ghost, a new one has to come. The practical implementation of an urn for four people complicates things when, at the undertaker’s, where Li presents his idea of ​​an urn with four compartments, they can’t figure it out. The scene takes up all your time and attention. Until then, the film seems to have been somewhere between a documentary drama on a small tableau and a typical Chekhovian story to which no specific denouement is attached, but where the narration is more important than the plot. To share the family’s views on the funeral, both spouses visit Nie’s daughter, who shows tourists around a National Historic Landmark. They ride with the tourists, but the daughter has her hands full with the tour and Li and Nie can’t bring themselves to put the possibly sensitive issue  to her just like that. A similar problem arises when a family portrait with the children has to be taken. Since the family cannot be gathered for a photo anymore, the family portrait has to be put together with Photoshop, luckily the photographer explains, that’s a very easy job.

Mr. Li returns for a short time to the region where he grew up and where his first wife died – in the vicissitudes of the Cultural Revolution under Mao Ze Dong. That was the period from 1966 until Mao’s death in 1976, the period also that included cruel large-scale ‘purges’ against so-called ‘class enemies’. But the people Li meets in 2020 don’t want to talk about it. Half a century is a long time and better leave the dead where they are.

Li Xuejian who plays Li is perfectly cast for his role. Neither he, nor the film become emotional at all, let alone sentimental. But Li still radiates a kind of stubborn determination which and is subtly told.  Picking up from that point, the story – never losing its rhythm – develops towards the end, to the point where the scars of a colossal past can be reconciled for a moment with a newfound love in the present. The only discernible weaker point is the scarcely used non-diegetic electric guitar music, which, despite or thanks to references to Ry Cooder in Paris, Texas (Wenders, 1984), sounds by its nature almost superfluous. This does not detract from the controlled way in which Gao Linyang elaborates in direction and script the interweaving of the present and the shared history of his country. Taken together this makes To Love Again into an almost perfect movie. A very worthy winner of the FIPRESCI award at IFFR 2022 indeed.