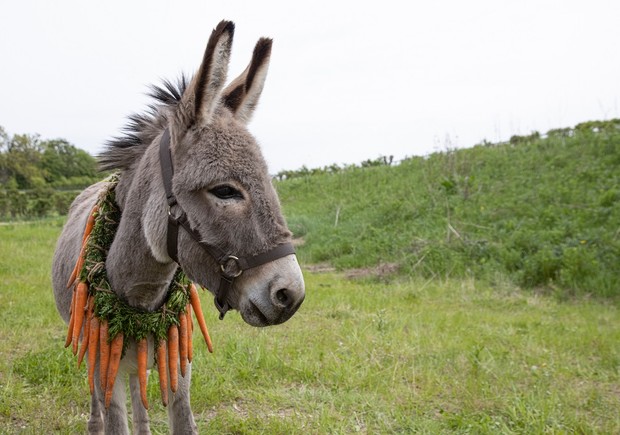 EO, directed by Jerzy Skolimowski, is the most poetic film presented in the main competition of the 75th International Film Festival in Cannes. At the same time it is the most expressive example of pure cinema, if we understand such a definition to include minimalism of dialogue, storytelling with images, color (visual composition), expressive editing rhythm, camera movement, refined frames, the richness of sound, and moving away from traditional narrative towards a collage of various genres: nature documentary, road movie, philosophical treatise, observational paradocumentary, surrealist, and picturesque film. After all, the director is also an excellent painter, which, not for the first time, is reflected in the visual side of his film work.

Jerzy Skolimowski’s EO (in the Polish version IO, referring to the sound donkeys make) is a contemporary interpretation of the famous French film Au hasard Balthazar (1966), by Robert Bresson, and at the same time a tribute to the great master of French cinema. In Skolimowski’s film the story of the donkey begins in a Polish circus and ends in an Italian slaughterhouse. The wandering of the donkey reveals the deeply disturbed relationship between man and nature. The animal’s journey allows us to appreciate its beauty. This is a bitter but above all lyrical film. It reveals the whole spectrum of human behavior towards a helpless animal. It is a suggestive picture of social relations and cultural changes taking place in the modern world.

Jerzy Skolimowski seems to look at the world through the sad eyes of a donkey, though not entirely. When the animal watches the free horses running across the meadow, his gaze rather allows the viewers to reflect that this is not his fate, that he has always been and will remain somewhere on the margin. Thanks to Agnieszka Glińska’s effective editing and Michał Dymek’s cinematographic strategy, which consists, among other things, in contemplating the main character’s impassive gaze, the director

Unlike in Bresson’s film, however, in Skolimowski’s cinema we can also see a contemporary Poland that is severely divided (when the animal becomes the mascot of a football team) and a wealthy, demoralized Europe that has lost its values (in the donkey’s journey through various countries). The script was written by Ewa Piaskowska and Jerzy Skolimowski, and the film features, among others, Sandra Drzymalska, Mateusz Kościukiewicz, and Tomasz Organek.

It is a picture made out of love for animals, out of sensitivity to their fate, which says everything about ourselves. The donkey, the main character of the film, does not even have a name, which takes away his subjectivity. He is an animal passed from hand to hand. Skolimowski emphasizes that in the world we live in, animals are human victims. Cruelly treated, abused, tortured, or driven to slaughter, they live only to fulfill human whims. The donkey does not act, does not pretend, he is simply in front of the camera. The lens finds with him, with his eyes, a true bond and magic. In Skolimowski’s film, Marie from Bresson’s film, the donkey’s guardian, is replaced by several characters, whom the animal meets during his wanderings. There is Kassandra (Sandra Drzymalska), the affectionate caretaker from the circus in which they perform together. After the circus closes down, the donkey ends up at a stud farm, then at a therapy center for children, from where, driven by his longing for a friend, he runs away. By chance, EO is taken in by the fans of a local soccer club, then by the repulsive owner of a fox fur farm, then by a boorish but harmless lorry driver (Mateusz Kościukiewicz), and finally by an Italian vagabond who turns out to be a priest (Lorenzo Zurzolo), the stepson of a rich French heiress (Isabelle Huppert)—a brilliant satire on bourgeois Europe.

It is a film that tells a story about love, about the longing for affection. The whole universe is reflected in the donkey’s eyes—also innocence, which the animal, unlike man, has never lost. There are not many films today which show such innocence, wrongly identified with naïveté. Focusing on Marie and the donkey, who experienced the cruelty of the world around them and with time lost their illusions, Bresson himself, as the author, believed in humanity to the end. Skolimowski seems to be deprived of that hope. The only thing that evokes deep compassion in him is the fate of animals, because people deserve their own. EO, which in a modern and at the same time universal way touches upon the condition of humans and animals—our attitude towards our smaller brothers—corresponds with Spoor, based on a novel by Olga Tokarczuk and directed a few years ago by Agnieszka Holland. While the protagonist of Spoor expresses her rebellion and disagreement with violations of animal rights in a loud and clear manner, the protagonist of Skolimowski’s film remains a mute animal. It is his gaze that screams.