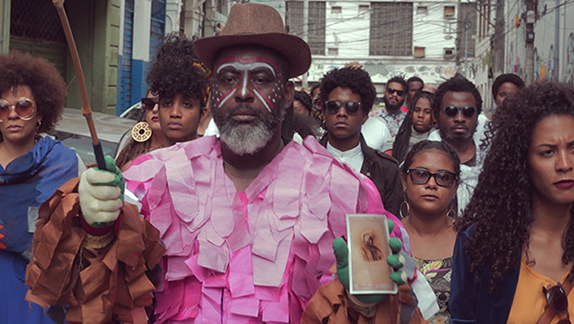 Anchored in a resonant, sonorous foundation of the Atlantic Ocean, superimposed voices pinpoint the historical context – Rio de Janeiro, Brazil, 2018 – an encounter of poets, in the last country to abolish slavery in the Americas, in the biggest slave harbour in human history. This first sonorous gesture indicates the poetic intention of narrating the black Atlantic to us, suggesting that the questions brought up in these spoken words – diaspora culture and violence – reverberate beyond the territory and historical context described. VIVXS (C Shapira, R E D’Alva, T Lohmann, 2021) associating moments of performance with documentary seems to be launching a proposition about the vitality of black art, but loses itself halfway, in its intent of making political questions universal and the affirmation of blackness by means of slogans.

In the early stages of the narrative, two black bodies instigate a movement with an aim. Without music, they dance through the streets until they meet. When they finally meet, a rhythmic cadence is produced by the shock between these two corporealities and other voices emerge from this encounter. The initial scene of superimposed voices transmutes into documentary scenes of poets reciting their poetry. To a certain extent, the editing reiterates the function of rhythm – visually represented by a drawing of a wheel turning – as though designating a repetitive movement. However, although the work with sound and editing provoke complexities in the image, as, for example, scenes in which English texts are being narrated to the beat of the drums of samba groups in Rio, the call of the voice which invites other voices becomes, over the course of the narrative, ever more repetitive of its own method.

The film’s experimental nature appears as an attempt to deviate from consecrated representations of the black diaspora and its effects. However, the film gets ever closer to the narratives, which it seeks to outdistance in so far as the narration in voice over and the images bring more information of the historical-political context. In some way, it seems to me that in the course of the film it abandons its experimentalism and chooses to take an ever more newsworthy approach towards being black, like the scene where the poets appear holding hands and when a group of black people some with their faces painted – in reference to African traditions, others with their tresses and ornaments – walk with severe expressions on their faces, a kind of excessive reference to the political images with which black bodies are frequently linked in the media or the strategies of capturing Africanized black beauty for publicity. The dominant media’s false promise of representation and visibility.

The same voice which plays with the word SLAM at the beginning, pronouncing it with pauses like a percussion instrument, playing with the idea of rhythm by prosody, later pronounces Black Lives Matter, but no longer playing with the pronunciation of a foreign word and without placing it in a Brazilian context. As an instrument of political propaganda, the slogan reduces the word to its own surface area to a certain extent. VIVXS could be a film which ventures beyond, if it continued to use experimentalism as a strategy to sustain images, but it opts for the commonplace.co