Talbot’s feature debut is a nostalgic, devastating tribute that echoes far beyond the city it’s addressed to 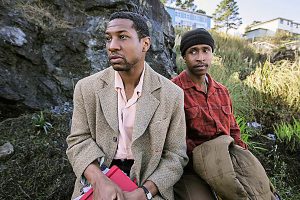 Whether or not you’ll relate to Joe Talbot’s achingly gorgeous The Last Black Man in San Francisco won’t depend on how much you know about the city it’s set in, but on your receptiveness to a certain longing for home, an urge to return to one’s past, to relive it and belong in it. You won’t need to have stepped foot in the Bay to bask in all the love Talbot channels into his Valentine, the kind of infatuation of someone who isn’t content with just snapping a postcard of his hometown, but conjures it as a living creature, some pulsating organ, and beckons you in. You won’t even need to have much prior knowledge of the rampant gentrification the area has undergone through the years, of the techies that flooded town and pushed the natives to its outskirts, to understand the pain of someone who needs to fight for his right to belong to a place that looks less homely every day. And you certainly won’t need to have suffered the same fate of twenty-something Jimmie, a former resident of the vibrant Fillmore District, to empathise with his struggle to return to the three-storey Victorian mansion he once lived in with his family, before money ran out – the house was sold, and the family felt apart with it.

Here’s the strange paradox: the more a film is anchored in its specifics, the more it is universal, because the better it understands its characters and their struggles, the larger the audience who can relate to them. Talbot’s debut feature is a tribute to and about San Francisco, but it ultimately transcends the very city it celebrates. This is a welcoming picture, not an alienating one, a film where a young man’s struggle to turn his old house into a home swells into a more tortuous path to rekindle something tucked deep within, an inward journey as much a homeward one.

The man at the film’s centre is its co-creator and lead, Jimmie Fails. The Last Black Man is based on his real-life story. Much like the young lad he plays onscreen (a flannel-wearing youngster who shares the actor’s name, incidentally, adding further autobiographical layers to the tale) Fails lived in Fillmore until the age of six, before a new wave of wealthier residents ousted his family and consigned them to a protracted diaspora, a pilgrimage in and out of housing projects, group homes, and shelters. Fails met Talbot when the two were in their teens, and they became inseparable, two boys roaming their native turf and fishing for tales of the old days. They began toying with filmmaking projects, one of which came to life in the shape of a short (American Paradise, 2017), and then another one that morphed into a feature length story centred on Jimmie’s exodus, propelled by a successful kickstarter campaign and a series of serendipitous encounters that warrant a film of their own.

The Last Black Man is also the story of a wondrous, greater-than-life friendship – one between Jimmie and his best pal, playwright-hopeful Montgomery (Jonathan Mayors), and the the onscreen duo’s chemistry bursts with glows of the energy of real-life things. Jimmie sleeps on a mattress squeezed against Montgomery’s bed, in a crammed hole of a room the two share at Montgomery’s old grandpa’s (Danny Glover). It’s a pastel-coloured building overlooking a stretch of the Bay where the water is contaminated and men in hazmat suits tiptoe around natives and sidewalks, as if the hood and its black residents were all radioactive. With an estranged father stranded on the other side of town and an addict mother who hasn’t shown her face in years, Montgomery may well be the closest thing to a surrogate relative Jimmie will ever have, and there is something brotherly in the way the two stick together, the kind of unique, priceless relationship that urges Glover to warn his grandson the two young men must never drift apart.

They are both untimely witnesses of seismic changes, both itching to leave the pestilent land they were pushed into, both far more attracted to past reveries than promises of cheap, short-lived thrills. Montgomery dreams of writing plays. He wears tweed jackets and a pencil behind his ear; after work, the little pier that stretches by his grandpa’s house turns into a writing room and a stage to rehearse material. Jimmie dreams of returning to his childhood home, a Royal Tenenbaum-esque abode in the Fillmore district graced with a cone-shaped rooftop known as a Witch’s Hat, all of it reputedly built by Jimmie’s grandfather sometime in the 1940s. When they’re not working at a local fish market the two friends sprint to the old place, only to sit on the sidewalk and glance up at the ramshackle façade. The house is owned by a couple of sixty-something white Caucasians now; when they’re not around, Jimmie sneaks through the fence to mend the old building, painting over sun-bleached window sills, cutting the grass, fixing the place as though it were some breathing creature on the brink of extinction, the last of its species. But when a succession dispute forces the owners to vacate the residence, Jimmie jumps at the opportunity, and the house becomes a home again – however short lived and flickering that feeling and that certainty may be.

Mayors and Fails are extraordinary together. True, the struggle to reclaim the old Fillmore mansion was never Montgomery’s to fight, but Mayors dons the aspiring writer the grace and empathy of an old soul, a fellow victim of the changing times, who understands his best mate’s pain as his own. When Jimmie begs him to be on the lookout for the white owners while he sneaks around, Montgomery glances at his friend with the gravitas of someone to whom that longing for an irretrievable past rings achingly close. And Fails, at his first acting gig in a feature film, carries it all on his shoulders, achieving the arduous feat of making the autobiographical instantly relatable. In a film that alternates talk-heavy segments with more lyrical, observational moments, there are several stunning passages when Talbot gives his best friend time to just bask in the house’s company, lying on the wooden floors, a cigarette dangling from his mouth, listening to the house breathe as the breeze makes the curtains billow. In those brief, discontinuous moments, time ceases to hold sway, and in Fails’ wide-eyed glances there’s the excitement of someone who’s just stepped outside his life, and now carries some solemn scrap of history.

The Last Black Man is a tale of two cities. The cacophonous, buzzing outskirts – with their street gangs and street preachers and misfits – are juxtaposed with the city centre and its white suburbia, worlds geographically close, but culturally at each other’s antipodes. It is also a tale of dreams, both in the literal sense that it homes in on one (Jimmie’s wish to return to a place that may never really be his again), but also in Talbot’s decision to interpolate that odyssey with dreamlike visions. In an engrossing early sequence, Jimmie invites Montgomery to hop on his skateboard, and the two float into the gentrified, white suburbs, and there’s an oneiric quality to the montage, a seesawing between reality and dreams that keeps resurfacing throughout. The film, each frame of it bursting with the melancholia of a childhood memory, was shot by Adam Newport-Berra, and composer Emile Mosseri amplifies the nostalgia with a score that doesn’t just cast a mood, but captures a mode of being, a scrambling after the one’s childhood. Even San Francisco, the city’s signature anthem you hear over a montage of Jimmie’s skateboarding through town, isn’t the happy-go-lucky 1967 classic by Scott McKenzie, but the more melancholic, heart-wrenching a cappella sung by Michael Marshall – the “new generation and new explanation” McKenzie’s ballad had promised in the late Sixties now a distant, aborted dream.

Long before co-scribe Rob Richert joined Talbot at the writing desk, the director and Fails had worked on several drafts of the story, and it is curious to hear them confess the earlier versions read a lot more aggressive than the shooting script. Jimmie’s is a tragic parable, a hopeless battle against forces he has no chances of ever overcoming, and yet Talbot never really gives in to anger, or to hatred toward the city’s new rich guests. Even when the film finds its villain in the shape of a heartless realtor, even when Jimmie’s struggle morphs into a maddening legal nightmare, The Last Black Man bursts with the same dignity, determination, and love of its lead. Late in his fight, Jimmie bumps into a couple of white startuppers bickering about how much they abhor the city. He interrupts them: “you don’t get to hate San Francisco unless you love it.” It’s a statement that reverberates in different tones and shapes all throughout Talbot’s engrossing debut – a Sisyphean battle that reads, far above anything else, as a poignant letter to a city, written with the selfless and contagious love that makes it travel far beyond it.