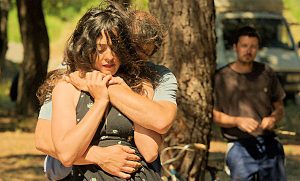 Enjoy life without restriction, since the system screws us. That could be the motto of Frank (French-Belgian actor Arieh Worthalter, seen as the father in Girl from Lukas Dhont) and Maroussia (actress and director Nadège Trebal), two lovers living in a port area in the south of France, facing economic dilemma when Frank loses his marginal job in a car accident. Maroussia herself works as a nanny at her place, taking care of babies helped by her mother (Françoise Lebrun, the iconic actress from Jean Eustache’s The Mother and the Whore (La Maman et la Putain) and what she loves most in the world is to make love to Frank. “There is not only sex in life” gently teases Françoise Lebrun’s character and when Maroussia answers back: “Speak for yourself”, in a funny way relating to Lebrun’s dialogues in Jean Eustache’s film. In fact, the real opening scene of Douze Mille is a powerful scene of sexual intimacy between Frank and Maroussia, seen with an authentic female gaze, as the gestures of the actors do not lead to sexual performance but of mutually giving up themselves. Then the principle of the film comes naturally, based on the very balanced idea that sexual equality goes with economic equality. Frank and Maroussia state that he should earn as much as he does, twelve thousand a year, to preserve their freedom to love each other the way they want. According to their plan, Frank starts a kind of odyssey through marginal jobs on the docks, looking for his twelve thousand – no more, nor less. In addition, promising to be faithful – not for moral reasons but for natural reasons that Maroussia explains like a painter, “otherwise the colors will mix up the pleasure will be less intense”.

With a perceptible warmth and the freedom her camera lends her, emancipated of all moral judgments or codes of any kind, Nadège Trebal follows the ballet of Frank and Maroussia trying to fit into an economic world that rejects them, and she chooses assumed (or imaginary) choreographies to explore this famous – but sometimes unexploited – link between sexuality, desire and economic means. Choreographies between Frank and trafficker-girls may be too long, but Frank and Maroussia’s dancing reunion in a railway area is full of desire and insatiate love that recalls Denis Lavant’s dance at the end of Beau Travail. In a way, Nadège Trebal’s work appeals to Claire Denis’s glorious masterpiece Beau Travail, focusing on the relation of power and the relation of desire between men in a Foreign Legion regiment. Despite Franks errors or temptations (he admits having desire for the mother of a friend he’s supposed to pay back, featuring a stunning Florence Thomassin) that make him a susceptible to desire, but not unreliable, the film finally achieves his double political and cinematographic goals. Douze Mille appears like an insolent utopia: how to resist and love in the time of capitalism.