A Quest For The Arc Of Safety

An exploration of the mind as a sanctuary and a prison at Berlinale. 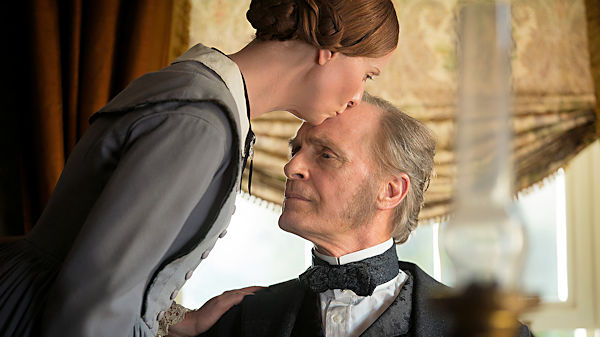 What would your demons look like were you to encounter them in worldly form? What is the price of revealing our damaged selves to those around us? The fear of disconnection is a recurrent theme in some compelling character studies seen at this year’s Berlinale – all of them grappling with personal demons and their long tails. An issue that is even more relevant for those on the periphery: the people society marginalizes for being different, for refusing to assimilate, or for suffering from mental disorders. A victimized segment of our global community that often transcends age, gender, class and race, and is systematically left out from relations be they social, sentimental or familial.

In “A Quiet Passion” (Terence Davies, UK, Belgium) poet Emily Dickinson (Cynthia Nixon) is held captive by the idea that she is a “wretched creature” and terrified by the fear that, in her own words, she will “never amount to anything.” It is alluded that the despair she suffers from may be inherited from her mother or may be caused by her determination not to succumb to normative behavior. Her defiance in a tug of war between spirituality and the notion of conformity is also reflected in Hajooj Kuka’s “Beats Of The Antonov” which screened at Berlinale last year.

In “Beats”, displaced peoples in Sudanese refugee camps cling to the music and spiritualty of their cultures in an effort to celebrate being alive despite the bombings from Antonov aircraft. While Dickinson is detained psychologically in her seemingly serene home, refugees in “Beats” display a freedom and joy that appears incompatible with their environment. In spite of the Dickinson’s Evergreens mansion with vast and lush expanses, the interiors are rigidly ordered so much so that Emily “can hardly breath.” Conversely, in “Beats”, after a bomb raid, laughter and music ring out from the refugee camps. According to Kuka, this is a means of safeguarding the community’s collective memory. Undoubtedly, it is likely that trauma may run deep, but as Kuka points out, “when you think ‘relations’ in this context [Germany], I feel like we’re looking at it through a Eurocentric perspective.” The director was compelled to “search for trauma” after NGOs questioned his approach to the refugees. “This is a very different culture, a different war…I think one of the troubles we have with mental health is that the vocabulary we have right now is limited”.

The different cultural perspectives through which trauma is expressed are also echoed in “Reluctantly Queer” (Akosua Adoma Owusu, USA), an epistolary short about a gay man named Kwame who must suspend his true self so as not to drift away from his mother’s love. The Golden Bear and Teddy nominated film is a collaboration between Owusu and Otu, a scholar and also the man who plays Kwame. Otu identifies as a queer man and by adopting the definition “reluctantly queer” implies that queer Ghanaian men “operate within and against varying social, cultural, political and emotional fields.” The film explores the idea of what “self” is and how our various identities intersect with each other. In Kwame’s case, significant attention is paid to his intersectional experience as both a black and a queer man, and how these experiences differ depending on the location (USA and Ghana). His authentic self is thus rendered, in his own words, “homeless.” In a letter to his mother, Kwame reveals his desire to bring his ‘self’ home, but cannot bear the prospect that loving a man will permanently sever him from his birthplace. The intercontinental distance provides him the freedom to live as he wishes, but costs him an ever-present anguish and loneliness.

This struggle between vulnerability and self-preservation is also present in “Der Nachtmahr” (Akiz, Germany), where the main character experiences her personal fears when, after a late night rave, they take a frightful physical semblance. Haunted by a terrifying, blind beast – which only she can see – Tina (Carolyn Genzkow) soon discovers that the creature is an embodiment of her inner turmoil. Every time the beast is harmed she suffers physical pain. She is afraid to tell people about her macabre situation for fear of not being believed, and the risk of ending up in a psychiatric hospital. Sadly, this is a fear that nearly comes true when Tina’s mother accuses her of lying, despite having first asked Tina to tell the truth about what is happening to her. In one of the most affecting dream sequences, we see Tina’s parents bring her to a psychiatric ward, to a bedroom door that’s too small for her to fit through. The terror that descends on her face when she realizes she would be forced through the small opening is very distressing. Later, it is suggested that by literally feeding and befriending the beast, she is somehow able to overcome this mental torment.

In hiding their frustrations and struggles, the protagonists of these films become somewhat “silent activists,” pursuing a subdued rebellion. Not all of them are equally eager to confront their internal unrest. So where do they find solace and safe spaces? What are the consequences of being unable to articulate their distress in a language that, as Kuka suggests, find different articulations depending on the cultural context? For Dickinson, her poetry delivers relief and inner harmony and yet, also nurtures her isolation and feeds her self-revulsion. This contradiction is seen in Kwame, in that, while relocating to the US allowed him to live more freely as a gay man, being a black man brought a new set of challenges which he did not experience in Ghana. A similar fracture cracks through Dickinson’s existential dilemma, where neglecting one side of her personality for the benefit of another turns out to be a risky endeavour. A common thread running through these stories is how the gradual erosion of a person’s spirit can undermine the mind and, in Dickinson’s words, “stun you by degrees”. In “A Quiet Passion”, her paralysing self-awareness results in her inability to interact with others. We see a similar situation with Tina whose personal and familial relationships disintegrate at every turn as she struggles to come to terms with her fears. Dickinson consistently queries where she will find the arc of safety in a world where a person’s “exquisite nature” can easily be crushed. However, all these characters are convinced there is a way out and that we do not necessarily become the very things we dread.