Depiction Of Cultural Relations On Screen 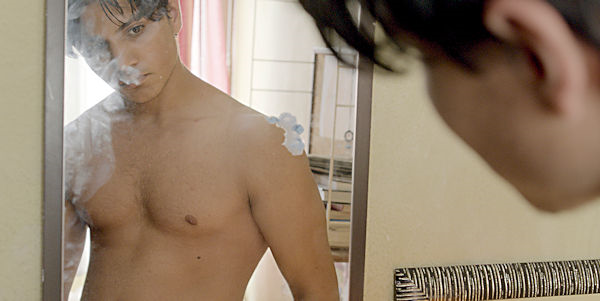 Rich in diversity and intercultural relations, three films at the 66th Berlinale program are metaphorical for their protagonist’s dilemmas and identity crises. Three young men stranded between traditions and modern life, struggling with their past while trying to make sense of their future, they find themselves in undesirable places: Iddrisu in “Nakom” (Ghana, USA), Mohammed in “Meteor Street” (Meteorstrasse, Germany) and Antonio in “Letters From War” (Cartas da guerra, Portugal). They are alienated by their environment, riddled through with problems, they miss ‘home’ and try to find out where they belong.

The difficulty of choosing between family obligations and personal ambition by Iddrisu, the main character in TW Pittman and Kelly Daniela Norris feature “Nakom” is depicted culturally. Traditional rural life in his village, Nakom is juxtaposed with life as a student in one of Ghana’s major cities, Kumasi. Even when the sudden death of his father forces him to return to Nakom, the city’s pull is still strong as we see him using his mobile phone to text his girlfriend and listening to the radio to keep abreast of the life he has left behind. He takes pride in his heritage and stays even longer than he planned but his heart remains torn between his dreams to be in the ‘real’ world.

According to Pittman, “There is a transformation that parallels the transformation of the landscape.” Due to his father’s indebtedness to his uncle, he stays behind to turnaround his family farm and fortunes to avoid his uncle taking over his father’s wives and property. This forces him to play an active part in his family as the head, as well as in the village. Just like the soil is initially hard to plough because of the severe dry season, so is Iddrisu’s rigid attitude to the village traditions and customs. He cautions his mother about baring her breast openly and does not like being called ‘Master’ by family members. However, as the rains fall and the planting season starts, a gradual transformation occurs as he begins to live in the moment. Iddrisu confronts both the tragedy and beauty of village life, and must finally choose between two very different futures.

“We are all direct products of our environment. To separate a people from a place is impossible,” says Bob Geile, Director of Photography, “Nakom”. This holds true in Aline Fischer’s “Meteor Street”, in which 18 year-old Mohammed, an Arab immigrant lives in Berlin with his elder brother Lakhdar, since their parents have been deported. Like Iddrisu in “Nakom”, Mohammed is torn between joining his parents in Lebanon and integrating into the German society. Fischer uses the leitmotif of airplane landings and take offs as a metaphor for being suspended between two worlds. His father encourages Mohammed to stay in Germany. His brother on the other hand, insists that he remains attached to his Palestinian roots. Somehow, Mohammed must become a man – on his own terms traversing his home and adopted cultures.

Mohammed tries to hold on to his past through childhood pictures, phone calls to his father in Lebanon and TV coverage of the Palestinian crisis. Through his diary, we see the conscious efforts he makes in order to integrate into the society through learning the German language. He also continues to work illegally for Germans who exploit and underpay him despite his brother’s strong admonitions. Despite his attempts to integrate, he finds his customs and religion are not easily accepted by his co-workers and boss who take him out for a drink where alcohol is served. At the same bar, a white woman tries to make love to him, which he refuses. Mohammed finds that no matter where he turns, he is unable to find a home which sets him on a nihilistic path to joining the French Legion where one’s background is not considered.

Unlike in “Nakom” and “Meteorstrasse”, Antonio, a young Portuguese army doctor in Ivo Ferreira’s “Letters From War”, prefers to hold on to memories of his home culture rather than be influenced by the new one in Angola during the colonial war in 1971. Despite his fascination with the African landscape and the warm reception he receives from the locals, he does not fully blend in and remains faithful to his wife despite temptations and to his country despite his conscience. While he is even asked to be the godfather to one of the newborn babies and even temporarily takes in an orphaned child, his views on African traditions remain imperialistic. Yet he is powerless to do anything when a local man says that he’d rather let his wife die at home than have her moved to a nearby town for medical testing. “Only elephants go away to die,” he says.

Antonio also finds himself in a contradictory position as a doctor at war, fighting in a foreign land to keep the colonial rule of this country. We see him treat people but he is also armed with a gun and would kill if the situation warrants it. He cannot bear to see the violence when the Angolan soldiers execute their citizens. He also finds himself questioning the rationale of the war. Being in the war has made it impossible for him not to have political leanings. “I can’t live without a political conscience” he tells his wife in one of his letters. He also admits that, “being here is eating the core of my soul.”

At the end, the protagonists must face their fears and make life changing decisions about their future. In finding a home, Antonio who cannot leave the war decides that his wife and daughter should join him in Angola. Home for him is not about the environment but the presence of his family is what matters most. Mohammed has lost everything; his brother abandons him after reading his diary and he gets beaten up by his German co-workers who accuse him of theft. This pushes him to the edge and in a desperate move, he joins the French Legion. “Meteor Street” closes with a shot of Mohammed in military uniform lying on the beach. The last funeral rites performed by Iddrisu is symbolic of the end of his time in the village. His final decision to leave traditional life and family obligation for his education in the city is both noble and selfish. While his departure will hurt his people back at home, his desire to become a medical doctor can become useful to his family and the village in the future. Antonio, Mohammed and Iddrisu are torn between cultures, societies, countries and individual desires. Each has to deal with different boundaries, responsibilities and commitments.

The depiction of cultural relations on screen mirrors the transformation in the identity of Antonio, Mohammed and Iddrisu. The tumultuous experiences they have faced have led them to decisive actions that reveal their agency and identity. These characters could not have reached these actions without having negotiated their place within an unfamiliar context.