In 2018, after more than 50 years of shared achievements, Paolo Taviani (born in 1931) lost his dear brother Vittorio (born in 1929). Their last film was the magnificent and anxious wartime love story, Rainbow: A Private Affair (Una questione private), from a novel by Beppe Fenoglio. They had won a Golden Bear in Berlin in 2011 for Caesar Must Die (Cesare deve morire), a black-and-white adaptation of Shakespeare’s Julius Caesar made with the dwellers of Rebibbia high security prison in Rome. 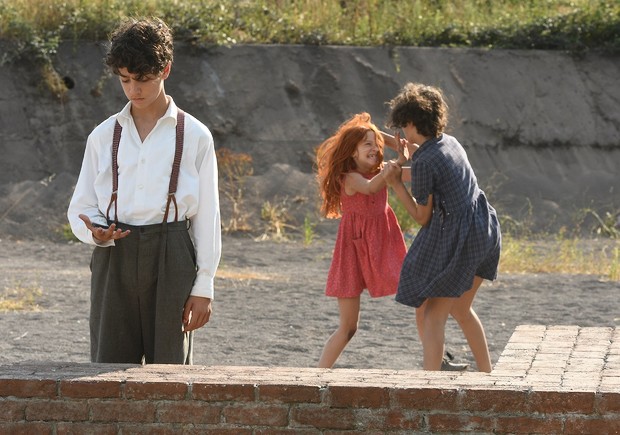 So 2022 is a very particular year for Paolo Taviani: For the first time he has directed a film on his own. The making of the film was interrupted by Covid, when, suddenly, a member of the crew fell ill and everyone had to rush back to Rome from Sicily. That was very painful to Paolo Taviani, who had waited for a long time to begin production and had to wait again to finish it. But as a matter of fact, Leonora addio is a very old project. The two brothers had wanted for many years to bring to the big screen Luigi Pirandello’s short story about a woman cloistered for life by a jealous husband. After Vittorio’s death, Paolo began to think about this story; four years later, nothing has been kept from the original story, except the title, which he kept because “it sounded beautiful” to him. And because this word, “addio,” “farewell,” obviously means a lot in this mourning moment.

Sicilian Luigi Pirandello (1867-1936), Nobel Prize winner for literature in 1934, was always important to the Taviani brothers. Kaos (1984) and You Laugh (Tu ridi, 1998) were already brilliant and moving adaptations of the great writer’s novellas. Besides Shakespeare or Fenoglio, Tolstoy, Goethe, and Ledda inspired their work, too. Literature, and 19th century Italian opera, was always in their mind, and what they called “20th century Renaissance,” Italian Neorealism. Now Paolo, alone, presents a two-part feature film. One hour is used to tell, in black and white, the long journey of Pirandello’s ashes. He had asked to come back to his native Sicily after his death, but his remains stayed in Rome for years. After WWII, an Agrigento public officer made a complicated voyage to carry the funeral urn to Pirandello’s native place.

The second part of the film, for half an hour, puts on screen the last story Pirandello wrote, some days before his death, The Nail (Il chiodo). Taviani, for this part, returns to color (and English dialogue). Those two parts look disconnected, but this is far from true. Il chiodo is the story of a young boy who kills—without any explanation—an eight-year-old red-haired girl in Brooklyn. The only strange reason he gives is that the big iron nail he used for this murder fell from a cart in front of him “on purpose.” Taviani has decided to give the young murderer Sicilian origin, which was not mentioned in the original story. So he can show us how recent immigrants can open a joyful restaurant in Brooklyn—with dance, good food, and music—and how inexplicably tragedy can appear in this optimistic atmosphere.

The beauty of this puzzling association of differently located narratives is that, in both cases, absurdity is mixed with horror, ironically mixed. The general feeling for the audience will be a kind of sadness, of melancholy, of fatality too, blended with irony, a tongue-in-cheek attitude towards our pain, our incomprehension of how the planet is spinning. Manoel De Oliveira once said, “What I like in general in cinema is a saturation of magnificent signs bathing in the light of their absence of explanation.” That sentence seems to announce Leonora addio. The energy, the invincible creative strength, the attention to human faces (particularly in frequent close-ups) from one of the youngest directors of the present times (other brilliant youngsters being Godard, Eastwood, or Bellocchio) gives to all of us a great moral and aesthetic lesson.