In Their Shoes
By Archana Nathan 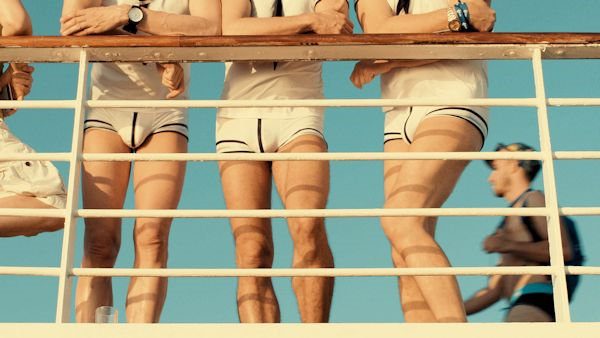 What does a love story between two young men of the Xhosa community in South Africa have in common with a documentary featuring 3,000 gay men aboard a week-long cruise on the Mediterranean? Not a lot, one may think, but John Trengove’s THE WOUND, which opened the Panorama fiction section and Tristan Ferland Milewski’s DREAM BOAT, which featured in the Panorama Dokumente section, both push back against stereotypes about gay communities and address central questions related to the ethics of representation.

Both films also dare to offer a platform for marginalized voices and open up subjects that are otherwise impossible to investigate given the fragile and oppressive political and social backgrounds they are located in. Trengove anticipates controversy when his film will be released in South Africa later this year. And one cannot but marvel at the title of Milewski’s film, for the film does indeed represent a utopia for personal freedom.

“THE WOUND was born out of a desire to push back against clichéd stereotypes of black masculinity perpetuated inside and outside of African cinema,” says Trengove in his director’s note. And this explains Trengove’s treatment of the subject. In THE WOUND, he tells you a story about a “forbidden” gay relationship between Xolani and Vija, two young men of the Xhosa community. But he sets this story against the backdrop of a “masculinity rite”, a circumcision ritual called Uk Waluka that is supposed to mark the initiation of young boys into manhood. By doing this, he expands the narrative about same sex desire to include larger themes such as gender and patriarchy.

But what makes Trengove’s approach stand out is the fact that he does not paint the ritual with any kind of positive or negative colour. He seems to invite the audience to look sympathetically and without judgment. One strategy he employs in order to do this is by introducing a character from outside to make us look with him. THE WOUND begins at the point when Kwanda, a little boy from the city, is brought by his father to be initiated into manhood in the mountains of Eastern Cape. Xolani is chosen as his mentor and it is through Kwanda’s eyes that we encounter Xolani’s “banned” relationship. Trengove does not insist that we must agree with all Kwanda’s words and actions, but at the same time he enables a fresh look at an age-old ritual.

The reason behind Trengove’s strategy with respect to Kwanda is also partly shrouded in his own status vis-à-vis the subject he is dealing with. “As a white man, representing marginalized black realities that are not my own, the situation is of course complicated. Even highly problematic. It was important to me that the story mirrors this problem,” he explains in his note. So, to counter this challenge, in a way, Trengove inserts himself into the narrative through Kwanda. “I’m a South African filmmaker, a queer filmmaker, but in the context of the initiation rituals, I definitely was the outsider. And I needed to embrace that fact. I knew that same sex desire would be the lens with which I would enter the film because I think there is a lot about the ritual that I learnt gradually, but felt that it was really not my place to comment on them,” he says.

To record and to represent

In the case of a film like DREAM BOAT, questions about representation also recur. With roughly 3,000 gay men on board, DREAM BOAT could have just ended up looking like a week-long flamboyant party. But Milewski employs a few strategies to ensure a coherent narrative emerges. Firstly, he uses the documentary format and narrows his canvas to five select protagonists.

It needs to be noted that the cruise is meant to be an intensely personal experience for a lot of the men on board as a chance to find love. The cruise also represents a space that is unreal in its promise of freedom. Far from families, the law and the heterosexual world, most of these men can finally be themselves.

Now, what does the presence of a camera do to this experience? Does it intrude? Milewski seems aware of this possibility and quietly follows the protagonists as they go about their day. He also does not overtly insert himself into the film, through a voiceover or an introduction. He makes the characters talk about themselves with a combination of interviews and conversation snippets. While this creates a fairly independent experience for the audience, Milewski’s role is, of course, evident in the editing. And he also seems immensely self-aware. His camera tends to entrap his protagonists, a natural consequence of following them around all day. This creates a few awkward moments. This is most evident in the case of Marek, a 32-year-old man from Poland. At least initially, Marek seems comfortable thinking out loud about what he is looking for in a prospective partner, the definition of love, the role that physical appearance plays etc. But over the course of the film, as the camera incessantly follows him around, one feels that it often ends up encroaching on his personal space. Take the scenes where he moves away from a party to steal a quiet moment on the deck and even cry out his confusions over where his life is headed. The camera hovers around as Marek buries his head and a sense of awkwardness prevails. But the fact that Milewski retains this scene in the film seems like an acknowledgement of the impact that a camera can have and even serves well to recreate a sense of the impact of the eternal scrutiny that most of these men are subject to otherwise.

The appeal of both THE WOUND and DREAM BOAT lies in the kind of voices that they manage to represent—from black marginalized communities in South Africa to Palestine, Poland and India and from farming communities to accounting managers. Along with that, a film like DREAM BOAT goes further to create a semblance of a free world. In the segment that introduces him, Dipankar, an Indian man is seen wearing the Indian flag on his naked body—something that is nearly unthinkable if he were to do this in India where the taboo surrounding homosexuality is still widely prevalent, let alone the permission to use the national flag as a piece of clothing. But DREAM BOAT makes space for the larger point about personal freedom that Dipankar seems to be making.

It is cinema that affords these men the “luxury” to be who they are, love who they want to and say what they want to. John Trengove agrees too. “I think I live out certain kind of fantasies in my work. Deep down, I crave anarchy and I have a kind of a rage that doesn’t find expression in my personality. But I find films that express it very gratifying. The character of Kwanda—he speaks in a way that I never could.”