People in Peril
By Richard Bolisay 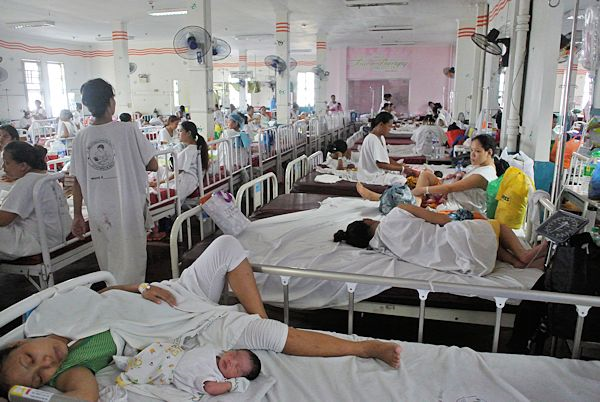 In Michael Rabiger’s book, “Directing the Documentary” (Focal Press, 1987), he writes: “Documentaries make human issues palpable in order to exercise the hearts and minds of an audience and raise involvement with other people’s lives and predicaments.” For him, each story is a window through which lives can be examined, providing not only a physical view of the people but also a sociopolitical understanding of their situations and motivations.

Documentaries can have a unique impact in this regard. Depending on the style of the filmmaker, they can bring the audience closer to their subjects, creating a relationship that can be personal and intimate, this is seen in three films in this year’s Berlinale. They strongly emphasize the human issues Rabiger discusses. Each of them depicts an environment of constant struggle and offers perspectives on people in peril, those in situations of confinement and threat but ultimately driven by optimism. Their themes are urgent — health, safety, and survival — and the films let the audience formulate critical conclusions based on what is highlighted, both narratively and technically.

At the center of MOTHERLAND (Bayang Ina Mo, Philippines) is a public hospital in Manila that accepts a throng of laboring mothers daily. They come from extremely poor families, some of them in their early 20s with five or six children, hesitant to do family planning and use contraceptives. Their husbands are either jobless or doing part-time work. Despite not having the means to provide for them sufficiently, rearing children has become the focus of their lives.

Director Ramona Diaz follows several women and documents their stay in the maternity ward — from delivery and breastfeeding to caring for their newborns and confronting their personal problems. The busy atmosphere of the hospital, with ongoing deliveries and scheduled visits from loved ones, is balanced with a highly observational approach, as the audience listens to patients being interviewed and sees the details of how the public system works.

MOTHERLAND also becomes a collective story that reveals voices of poverty in Manila — the hospital serving as the stage on which their predicaments become known — and outside its walls lies an even more ambiguous future for all of them. Diaz presents the shortcomings of a public institution — cramped wards, outdated healthcare methods, unsanitary conditions, inadequate equipment and technological resources — but there is something impressive with the attitude towards limitations exhibited by both hospital workers and patients, doing the best they could to make do with what they have. They simply go on with their lives despite their problems.

A hospital is also the setting of Ma Li’s documentary INMATES (Qiu, China), a mental asylum in northern China where a diverse group of men struggle, knowingly and unknowingly, with their illnesses. They talk a lot: to the nurses, each other, and themselves. Sometimes they talk excessively, sometimes they just stare intently at blank spaces. Some walk around and approach the hospital staff for casual conversations, while those who are hard to control are tied tightly to their beds. Many of them regard the place as a prison, and the chance of freedom is the only thing that keeps them holding on.

The desaturated colors make the surroundings look bleak, highlighting the grayness and lack of spirit in their confinement. In fact, the hospital does feel like a prison — physically, mentally, and socially — and in almost five hours the sight of unadorned walls, doctor gowns, patient uniforms, drab hallways, and dreary weather becomes quite familiar, even strangely comfortable. This emphasis on space and the dynamics that occur brings the viewer closer to the patients.

The energy of INMATES comes from the personalities of the various characters. Ma alternates between letting them ramble with their personal stories and showing them with their visiting families. At some point, with the clarity of their thoughts and the poetry they share, the audience might begin to wonder whether they are really insane. She aims to reveal the thin line between sanity and madness, but she achieves something more fundamental: the will to live, regardless of mental state, is always worth caring for.

Without using voiceovers, MOTHERLAND and INMATES manage to capture lives with directness teeming with intimacy. Their core is clearly emotional but without off-putting sentimentality. They have differences in style and structure, but both are anchored to their specific social contexts with well-defined situations, driven by the colorful characters of their subjects. They show people whose mere existence is inspiring, and whose will to live is admirable given their difficult circumstances.

Both films mirror Rabiger’s idea of a documentary as a window for observation of people’s daily lives as well as for closer examination of their conditions and motivations. THE BOMB (Kevin Ford, Smriti Keshari, Eric Schlosser, USA), shown in the Berlinale Special, depicts individuals in another way, but also delves strongly into pressing human issues.

THE BOMB does not follow particular subjects for interview or scrutiny. It relies on archival and present-day footage depicting people involved in, or affected by, nuclear technology: soldiers in military parades in nuclear states, Japanese citizens affected by the atomic bomb, professionals working with nuclear equipment, children and adults in the “Duck and Cover” propaganda film by the US Federal Civil Defense Administration. The audio recordings of interviews and speeches also play an important role in completing the milieu.

Presented with live music by the rock band The Acid, THE BOMB makes for a visceral experience. The simulation of sounds of nuclear testing and bombing creates a terrifying effect that reminds the viewer of the gravity of the situation, how this dangerous action can only be done with government machinery. The music pushes the emotional buttons of the visuals, quiet and brooding when needed, but mostly loud and imposing to call attention to the atrocities being presented. Adding to the atmosphere of alarm is the manipulation of images by the art director Stanley Donwood, with texts, numbers and scribbles appearing and disappearing on-screen for effect.

This complements the human and humanistic voice that emerges from the cacophony of audiovisual elements. It is this quality that makes it a significant piece of advocacy work at a time when such activism is needed; these elements give the film soul. By letting the audience see the devastating effects of nuclear technology through text and images, the film shows concern about humanity and its survival — and it wants everyone who sees it to do the same.

Caring for people and the world

All three films, in Rabiger’s words, explore a “corner of reality in order to reveal what underlies human or other relationships.” Instead of finger-pointing, they listen and attempt to find answers.

MOTHERLAND and INMATES highlight their characters and their environments, giving viewers a bigger picture of their struggles, a nuanced perspective of their sociopolitical situations. In MOTHERLAND, they are in peril because their poverty prevents them from having access to basic needs, while in INMATES, their mental conditions do not seem to improve despite being given proper attention.

THE BOMB has a stronger emphasis on its presentation, but it brings to the center its concern for the world and its looming destruction. The effect of its experimental montage, which builds towards a cathartic end, comes close to the familiarity and warmth of MOTHERLAND and INMATES. Human lives will always end. But when they are courageously presented in documentaries and take the viewers into new worlds, their stories extend further and become unforgettable.