You and Your Folks, Me and My Folks
By Héctor Oyarzún 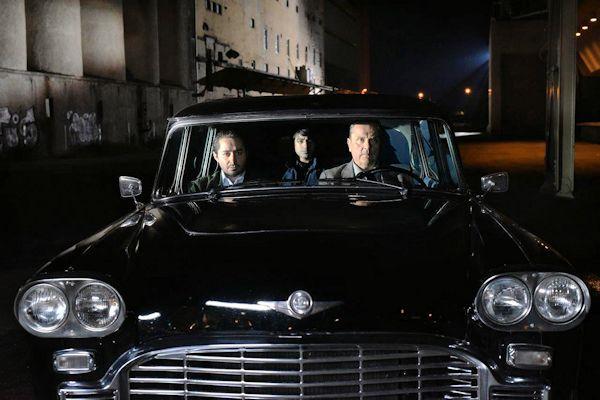 Some of the films in the 67th Berlinale seem like a direct response to the current global preoccupations with security and border protection. Aki Kaurismäki’s THE OTHER SIDE OF HOPE (Finland), Camila Donoso’s CASA ROSHELL (Mexico/Chile) and Sebastián Lelio’s A FANTASTIC WOMAN (Chile) present different forms of social relations as courageous acts of resistance. Each of the micro-communities depicted in these films shed questioning light upon an entire society, and how acts of kindness can be political actions.

THE OTHER SIDE OF HOPE revolves around two characters in Finland dealing with different forms of separation: Wikström rebuilds his life as a restaurant owner following his breakup, while Khaled seeks asylum from Syria. Like many Kaurismäki films, the action starts from a crisis, and in this case it´s a double crisis due to Wikström’s personal and Khaled’s political problems. These two characters don’t even meet during the first half of the film. When they finally do, literally colliding behind a dumpster, they begin an odd friendship informed by their mutual status as solitary figures.

Authorities deny Khaled’s petition for asylum, arguing that Aleppo is “not actually dangerous right now,” a merciless verdict from which Khaled can only escape. He flees to Wikström´s restaurant, where he finds sanctuary. Wikström seems selfish throughout the first half, with his plan for opening a restaurant motivated mainly for cold financial reasons, so it seems weird when he gives refuge and employment to Khaled. This irrational change of attitude is common in Kaurismäki’s films, showing how opening one’s world to unexpected relationships brings positive change. Hope in the film comes out of crisis.

As Kaurismäki puts it, “The most noble traits, and the ugliest, are always discovered in a crisis.” The style of the film reflects this utilisation of conflict as social realism scenarios are shot in highly stylised lighting, and warm-hearted humanitarian actions are performed with inexpressive acting. Kaurismäki makes a film where individual crisis is surpassed through overcoming a bigger collective crisis where his characters must confront society’s injustice.

CASA ROSHELL is even more explicit in portraying the state of being a social refugee. The title is the name of a transgender club in Mexico where Roshell Terranova gives “personality lessons” to those exploring trans identities. Donoso’s film shows a community upholding different rules and definitions about gender than those of mainstream Mexican society. But if in Kaursimäki’s film we see a direct contrast between his protagonists and a larger circle of intolerance, in Donoso’s film there is no shot of the oppressive world outside the club. The film is inspired by Latin-American violence against transgender persons, but the subject matter never directly addresses it.

Instead of waving a big banner over the importance of these issues, Donoso focuses on micro-political actions, following the intimacy of Roshell’s club. Rather than just being an observer, Donoso works in collaboration with his subjects, and in this way remains faithful to the club’s spirit. This is reflected in Donoso´s formal approach: it is a scripted fiction film based on real events that occurred in the club, with all the participants playing themselves (with the exception of two professionals).

The film makes such a conspicuous effort to avoid the outside world that it makes the viewer wonder about what it means to ignore such seemingly inescapable forces. Finding a place in the margins and sharing personal differences is what makes Roshell’s community thrive. From their viewpoint, just having a way to meet others like themselves can turn into a political act when the outside world threatens their identity.

Nonetheless, Roshell and Donoso’s collaboration is about revealing to the world this private space that was made explicitly to ignore it. This wasn’t an easy decision for Roshell and her fellow activists, to the point that some of the voices had to be changed to protect their identities. Even at the prestigious Berlinale premiere, Donoso and Roshell declared that the coming Mexican premiere is actually more important. When a micro-community exposes itself to the greater society, it risks creating friction with it. But making and showing this film may construct a future where Roshell’s club doesn’t need to be a secret anymore.

A FANTASTIC WOMAN also portrays the experience of a trans individual, as the main character Marina loses her partner Orlando when he suffers an aneurysm. Marina is deprived of her right to grieve by Orlando’s family and Chilean authorities whose conventional beliefs cannot accommodate her trans identity. The film takes a smart strategy by opening with a series of intimate scenes which convince the viewer that everything is fine for Marina as a trans person in Chile. Going out with Orlando, she doesn’t meet any discrimination. The style is so sweet as to resemble a fantasy decked in Disney fairy tale film music. When Orlando dies, everything falls apart for Marina, and Lelio’s point of view changes from a Hollywood love feeling to a harsh social drama. Orlando’s family attacks Marina physically, and she doesn’t find any support from Chilean authorities. Lelio presents a universal kind of refugee, someone who is cast out of love and left completely abandoned.

Lelio’s sense of political courage is different from Kaurismäki’s odd pairing and Donoso’s club. In the film Marina has the obligation of finding strength alone. She finds allies in her sister and her vocal teacher, but at the end it is a battle fought alone. Society conspires against her, but the camera and Lelio’s fantasy scenes protect her from this. The two viewpoints of Lelio and Donoso on how to fight transgender discrimination provide a contrast: Lelio focuses on how fantastic this woman can be when she finds her own strength, while Donoso shows how, by interacting with each other, the club members are able to find strength in community. While Lelio’s film is supportive and respectful from a distance, Donoso’s film is a collaborative work where her cast participates actively in the film’s writing. Donoso identifies with an underground collective while Lelio makes a personal identity tale for a mainstream audience. We can see this formally too: while Lelio works with a big-budget and produces well-crafted cinema, Donoso’s film is shot in a gritty style where stains on the lens can be seen, and actresses stare at the camera.

The diverse style of these three films depicts different forms of micro-political communities, but most of all, it shows how a chosen style is essential to do so. Kaurismäki contrasts opposite styles to bring humanity in the middle of a crisis, Donoso immerses herself in collaboration with her subject matter and Lelio takes a cleaner approach to bring a transgender protagonist to mainstream Chilean cinema. They are all concerned with social relations as political resistance, but their respective power lies in how they engage in this fight.