Supercolliders And Building Blocks – Guadagnino vs. Kaurismäki
By Christopher Small 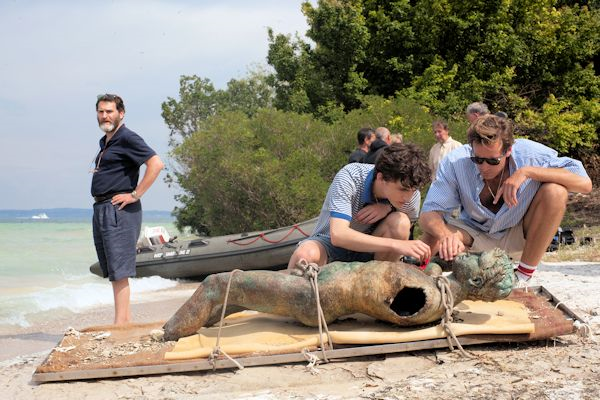 In subtle and surprising ways, Luca Guadagnino’s CALL ME BY YOUR NAME, the story of a relationship that develops between a 17-year old boy and his father’s academic resident, is about the elusive grasp we have over our own impulses. Nobody who responds to Timothée Chalamet’s performance as the confused Elio could ever contend that the film is merely about the shift from one emotional state to another – from confusion to acceptance – but about the difficulty faced when this inner conflict begins to seem like the eternal state of things.

The striking thing about the movie, and indeed all of Guadagnino’s movies, is its intense maximalism. His movies are distinguished, as well as reviled for their luxuriousness; even their most sensitive moments are shot through with an all-too-Italian enthusiasm for emotional and graphic excess. In CALL ME BY YOUR NAME, taboos are blasted open in extended, hushed dialogue scenes – that are both literary and naturalistic – drilling into subject areas of potential social transgression. Meanwhile, Aki Kaurismäki’s asylum seeker sit-com THE OTHER SIDE OF HOPE, similarly unwincing in the face of transgressive material, trundles down the opposite path.

If the comparison between the perils of a rich kid finding a way to both process (as well as act upon) his latent sexuality and the story of an asylum seeker caught in the gears of state violence makes your skin bristle, I think it can be somewhat justified in the context of each movie’s structural concerns.

CALL ME BY YOUR NAME is a kind of supercollider movie, details swirling into different arrangements of seemingly random narrative value, while THE OTHER SIDE OF HOPE is a building-block movie.

In building-block movies, both actors and their scenes have a purely functional quality in the context of their director’s architectural eye. These grid-like structuralist movies build their steady momentum out of the interrelation of one element with another. Actors function in a muted dialogue with the edits that bind them to their spaces; scenes click together with each other to form droll, long-form patterns. Supercollider movies, on the other hand, come together out of a vast array of tiny material details; the concerns of each scene are less structural than they are physical and founded in ephemerality. Moment to moment concerns undercut larger narrative ideas; themes are replaced by images and ideas.

Where Guadagnino’s scope is ever-expanding, Kaurismäki’s is truncated. Guadagnino atomises scenes into disparate gestures and details, Kaurismäki takes his material, distills it into simple geometric patterns of light and colour, and strips the drama of its affect. As Kaurismäki said in the press conference for the film, “I like my actors to move as little as possible.” His movies, built out of big, block-like scenes and straight-faced line readings, are exemplary of contiguity and restraint; in other words, the antithesis of Guadagnino.

There is no paucity of elegance in CALL ME BY YOUR NAME, and the central conflict – not between the son and his parents, nor even all that much within himself – takes place in a highly privileged or outright fantastical world – an Eden-like Italian summerhouse – far from Kaurismäki’s drab Helsinki. The movie’s emotional collisions take place against the backdrop of a paradise stocked with Olympians, and stripped of all the trappings that would constitute a grubbier setting, with the real-life pressures of non-acceptance and the looming cloud of familial rejection on the horizon, only the basic concerns and inner struggles of the moment matter.

But both Guadagnino and Kaurismäki are drawn to material that complicates the dynamic of their movies. THE OTHER SIDE OF HOPE, as with other Kaurismäki movies, could function well-enough as a po-faced comedy of manners, a miserablist dollhouse of offbeat characters stepping in and out of comic set-ups and flatly speaking goofy jokes. His main character, Khaled (Sherwan Haji), is an outsider, a refugee escaping the Syrian Civil War, he is at odds with the culture to which he has to adapt. After rising out of a mound of coal on a freight ship at the Helsinki cargo docks, Khaled begins the slow process of accommodation to a different way of life. Standing in front of a outrageously drab bar called “The Golden Pint,” he drolly quips to his fellow asylum seeker, “let’s go and see what the infidels drink.” Of course, he later admits to being an atheist; his remark is directed more at the dissonance between the familiar culture he knows and the alien culture he has stumbled upon.

So, both CALL ME BY YOUR NAME and THE OTHER SIDE OF HOPE are about a certain idea of courage. Both lead characters are faced with uncertainty, one within the framework of total comfort, the other total poverty. Elio is confronted by the possibility of emotional change, both in the way he understands his own feelings as well as in his relationships with his parents, the girl vying for his affection, and of course with Oliver (Armie Hammer), the man he grows to love and desire. Khaled’s is a physical odyssey: escaping war, finding his sister, and assimilating.

Never one to preach, or even to speak-up with all that much gusto, Kaurismäki’s building-block modesty leaves space for the inclusion of baldly political refugee narratives that are overlooked – or, worse, appropriated – by an otherwise uninterested arthouse industry. Because he treats all material with the equally dispassionate eye of a craftsman, Kaurismäki’s appropriation of a refugee narrative, as with the African stowaway storyline in LE HAVRE, is even more startling—and certainly not as canny as it might seem in mere description. Khalid is on an equal plane with his Finnish counterparts: all are first and foremost formal elements in Kaurismäki’s design. His generosity is precisely founded in the way that this acceptance manifests itself in a typically Kaurismäkian way.

Equally, Guadagnino’s supercollider subversions act as a buffer against any potential excursions into thematically suspicious or overinflated territory; he introduces the idea that his characters are first and foremost bodies before the film itself has begun. The credits appear over photographs of sculptures from antiquity, and later it develops into the obvious theme of the film, as every character is defined by the poses they strike, the way that their gestures overrule and usurp the dialogue.

The heartbreakingly tender erotic moments are animated by these details, and the tension between body and inner life is a productive one for Guadagnino’s sensualist purposes. Elio walks into Oliver’s bedroom while the house is unoccupied, lays on the bed, and pulls Oliver’s trunks over his head, raising his pelvis into the air behind him as he feels the shivers of arousal roll through his body, activated by both the transgressive nature of the act as well as the scent of the man he desires. Similarly, later in the movie, Oliver’s status as something of a cipher is complicated by a privileged point of view: he teases Elio sexually, then abruptly closes a door between them. As soon as Elio is not looking, a gasp and a smile takes over from his expression of playfulness. It was, of course, another mask.

These two movies lead on from the idea that people are primarily bodies, to be either desired or discarded. Guadagnino’s maximalism, like Kaurismäki’s minimalism, is rooted in the physical grace of his characters. There is, in both, an active tension between the narrative demands of a scene and the actual bodily presence of their players: thus, light shining through the tips of two characters’ fingernails as they shake hands in CALL ME BY YOUR NAME is as essential a sensual fact of the scene as the resolution it represents.