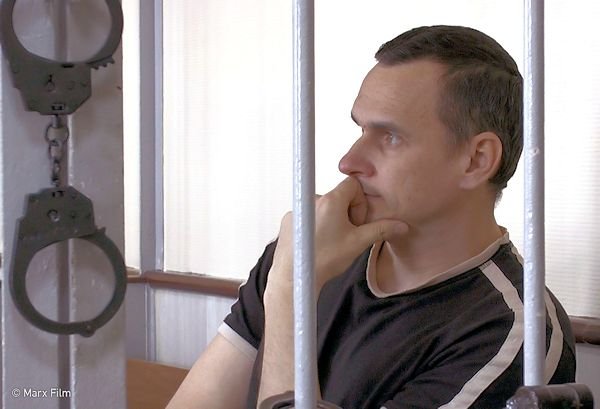 2034. This is the year Ukrainian filmmaker Oleg Sentsov is scheduled to be released from Russian prison on charges of plotting terrorist acts. Throughout the 75-minute-documentary THE TRIAL: THE STATE OF RUSSIA VS. OLEG SENTSOV he appears in a small cage in the courtroom mirroring the Kafkaesque absurdity of the trial itself.

Director Askold Kurov, who has several politically charged documentaries under his belt, chronicles the 2014 trial of Sentsov. However, THE TRIAL is not an artistic masterpiece and is more like an extended news report with no real narrative arc. It is an important alternative document to the state narrative which sensationalise these types of trials to spread fear of dissent and advance compliance.

Kidnapped from his house in Russian-annexed Crimea on charges based on testimonies that appear to be taken from defendants under torture, Sentsov is accused of plotting to bomb the Lenin monument and Russian public offices. The film argues that Sentsov’s activism is the reason for his imprisonment. He took part in the AutoMaidan protests, was helping Ukranian soldiers during Russia’s annexation of Crimea and is a vocal critic of the Russian regime.

The film weaves archival footage of Sentsov’s television appearances as a film director, scenes from his trials effects on his family, the activism by the film community for his release and the progression of the trial itself – with a lot of talking heads explaining the trial’s proceedings and the larger political context in Ukraine and Russia.

Presented in the Berlinale Special by the European Film Academy, audience members were asked to hold up yellow “Free Oleg Sentsov” papers as part of a wider campaign for Sentsov’s release further demonstrating that the film’s relevance lies in its political content.

“The Academy had to take this position and help him as a sign of solidarity. Knowing from my own experience of the communist time in Poland, this kind of international solidarity is the only weapon we have to fight this political injustice,” filmmaker and academy member Agnieszka Holland who was featured in the film told the audience after the screening. “Oleg needs us but we need Oleg too. His courage is relevant today, we need this message of courage.” 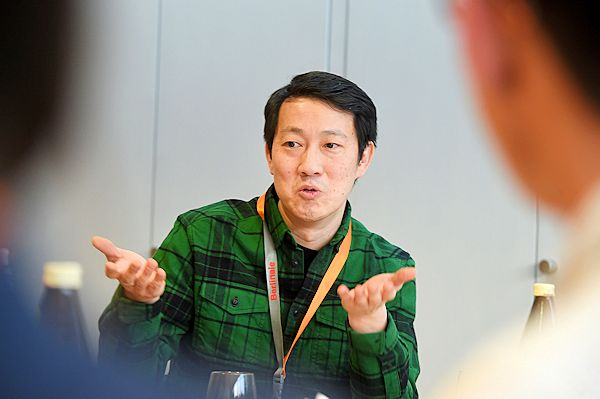 Kevin B. Lee is a filmmaker, film critic and one of the most prolific video-essayists, with more than 300 works under his name. His “desktop documentary” TRANSFORMERS: THE PREMAKE was praised as a work that defied genre definitions. His work updated the found-footage genre and it opened artistic ways to explore film criticism on Internet platforms. I sat down with Lee at Berlinale Talents to discuss the political aspects of video essays, film footage rights and his views on his work’s evolution.

How do you think found-footage changed after the Internet?

In the 60s, and earlier, there were artists who were using found-footage in a way that was much more radical and critical. Then in the 90s, media became much more personalized, and in the 2000’s with the Internet, the ability for people to use found-footage became a lot easier. It sounds like a great thing, but the problem is it seems harder to have this critical viewpoint because people take as normal that we live in a society that consumes media.

What do you think about how video-essays introduce technical concepts of film to a wider audience?

It is really important for the audience to understand how films are put together, but one thing that is missing from these analyses is a sense of poetics. The other thing that is missing is an awareness of the social-political dimensions of film. Using found-footage is like saying: “I have a social and personal right to do something with this.” But that comes with a second question: What do I do with it that is worthy of this right?

Is there a need to take a step forward with video-essays? I’m thinking about your TRANSFORMERS: THE PREMAKE and kogonada’s COLUMBUS?

This practice is about how to exercise my thinking through audiovisual form. I’m always going to look to films and media as my subject, but it is the way that I engage with it that hopefully can create a new form and style.

Pictures From The Revolutions
By Christopher Small 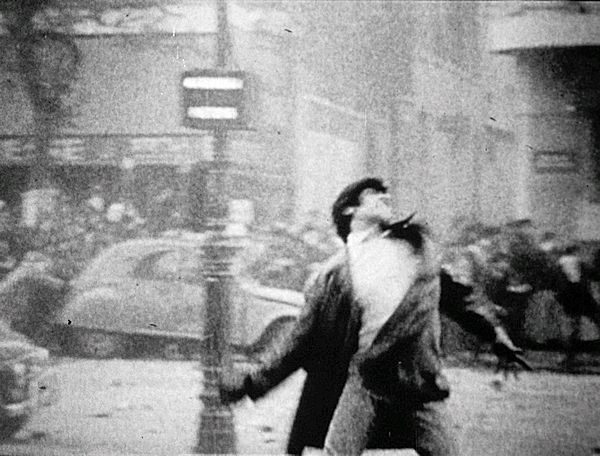 Daniel Cohn-Bendit, a French anarchist and arguably one of the most prominent public speakers to emerge during the Paris students movement of May 1968, becomes a strange locus for many of the ideas that make up João Moreira Salles’ IN THE INTENSE NOW, shown in Panorama Dokumente. Cohn-Bendit himself always stressed that the movement’s strength was in its spontaneous forward-motion, driven by an engine of widespread anger and idealism and containing no ordained vision for a future society. In one scene, taken from a contemporary television broadcast in which his charisma hijacked the ostensible agenda of the discussion, Cohn-Bendit berates his conservative counterpart for suggesting that the Bolshevik Revolution of 1917 was carried out with a specific idea of a new society in mind.

But it would be misguided to call Cohn-Bendit the movie’s protagonist, just as it would to focus too much attention on his role in the context of the May ’68 national strike. Both the film, about the plurality of revolutionary movements in 1968 around the world, and the historical student-worker coalition are and were defined by their lack of a recognisable centre. João Moreira Salles carefully suggests affinities and contrasts between the libertarian character of the aborted French revolution and the successful authoritarian revolution of China inadvertently documented by his mother in home movies on a business trip.

It’s a productive pairing, one well-suited to Salles’ calm style of historical overview. Other than those rescued from his mother’s own personal archive, this film consists entirely of historical broadcast or cinema images. But he uses the images with precision: a clip of Charles de Gaulle addressing the Republic is therefore, in Salles’ conception of things, not only a piece of historically enlightening material, or something useful structurally, but a portrait of gesture and performance, and the catalyst for a study of the role they play in captivating an audience.

Ultimately, the key conflict in Salles’ movie is between television spectres: between de Gaulle’s on-screen fatigue and Cohn-Bendit’s on-screen vitality. Along with the China footage, this pictorial face-off is at the heart of Salles’ interest in the mysterious inner life – political and otherwise – of filmed images.

What An Empty Promise Feels Like
By Archana Chidambaranathan 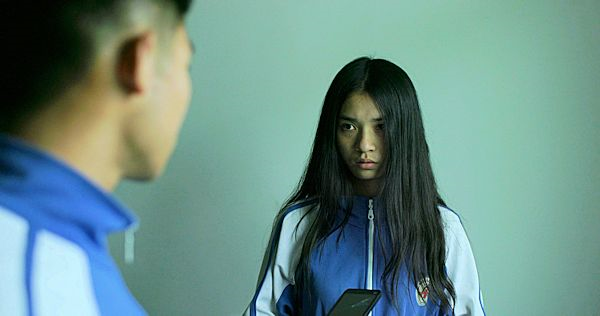 “Why do you want to enter the Police Academy?”

“Because it sounds safe”

This exchange between the police chief of Mei Chang, a small city in The People’s Republic of China and Lynn, a 16-year-old girl, pretty much sums up Huang Ji and Ryuji Otsuka’s film THE FOOLISH BIRD (BEN NIAO, Berlinale Generation 14Plus). The entire film can be seen from this prism – of a young girl’s search for a sanctuary in a city that seems to have been abandoned just when it was on the brink of a transformation.

But who can blame Lynn, really, for seeking refuge? Take the landscape of Mei Chang, for example. It looks bleak: a lot of grey fills the screen, empty construction plots, half-finished buildings, demolitions and overall, a general sense of isolation prevails. Then there is the personal story of loneliness of Lynn whose mother is forced to work far away, leaving Lynn to encounter her teens, her sexuality and her youth all by herself.

Everything around Lynn is threatening her in a way. The film opens with the news of the rape and murder of a young girl. The smart phone revolution seems to have gripped Mei Chang and its youth but with the absence of a sense of purpose to the people’s lives in this empty city, the presence of these phones seems menacing. The phone itself, while initially giving Lynn a taste of freedom (even liberating her sexually), gradually, imprisons her to a murky world of rape, venereal diseases and corruption.The camera too follows Lynn obsessively trying to peek into her even as she tries to bury her face in her tresses in search of an escape.

Through the story of one little girl, THE FOOLISH BIRD, actually, therefore, tries to tell you a story of a city left behind in the global race of smart and super smart cities. It tells the story of haste, of too much being done without adequate thought and ground work. It rather literally shows you the inherent violence that is at the foundation of mindless ‘development’. And, it is a cinematic portrayal of what an empty promise looks and feels like.

Packed with powerful frames of the city, THE FOOLISH BIRD also features a phenomenal performance by the little girl playing the central character of Lynn. She straddles and epitomises the twin worlds of adventure and entrapment brilliantly. THE FOOLISH BIRD is a searing portrait of the times we live in.

Culture Will Not Be Circumcised
By Adefoyeke Ajao 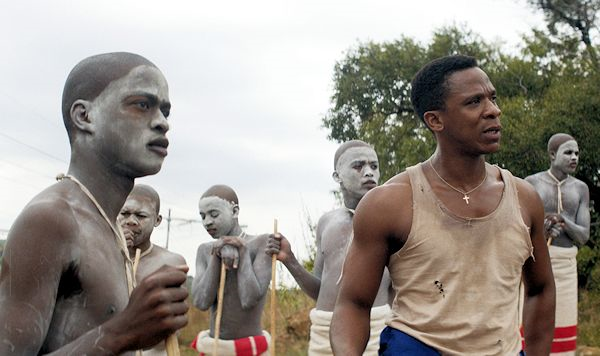 Two snips is all it takes to make a man within traditional Xhosa culture, if the male circumcision rites featured in John Trengove’s THE WOUND (Berlinale Panorama) are taken literally. However, it soon becomes clear that it will take more than a razor to cut into the core of society.

Set in South Africa, against the backdrop of a circumcision camp, the film explores the tensions between age-long customs and contemporary inclinations through the sexual preferences of two childhood friends and “caregivers”, Xolani (Nakhane Touré) and Vija (Bongile Mantsai), and a bourgeois teenager named Kwanda (Niza Jay Ncoyini), who has been coerced into partaking in the circumcision ritual by his father.

Traditional society’s selective assimilation of what it considers to be foreign is evident. While kids are fascinated with cable TV, swimming pools and smart phones, they are resolute in their intolerance for homosexuality – obvious, when one of the initiates confronts Xolani with rumours about his sexuality.

The identity crisis that accompanies the denial of sexuality is palpable throughout the film’s runtime. Xolani’s deadpan expression hides the dissonance between his cultural beliefs and his natural desires. Vija (who ironically is a married father of three girls), masks his turmoil behind a veneer of exaggerated masculinity. Unable to openly express their feelings for each other, both men seek solace in sharing drinks, cigarettes, and secret sexual encounters in the forest. That is a riveting watch as both actors convincingly pull off the roles of tormented lovers through vivid and steamy sex scenes. Kwanda seems to be the only one willing to stand up for his beliefs although he is brash in his approach to challenging traditions and his obsession and frequent intrusions into Vija and Xolani’s romance belie common sense.

THE WOUND is laced with cultural allusions: the dialogue is mostly in the local language and is interspersed with dance, song and rituals. In addition, the detailed subtitles give a delightfully clear understanding into the workings of the Xhosa rite of passage. These references also serve as a contrasting canvass on which the characters’ stick out like a sore thumb against a macho culture.

Through its characters, Trengove’s film magnifies the displacement of LGBT within a pre-existing culture. It reveals the turmoil of being an outcast within a traditional space.